Last night, my inner demon participated in a game of "Red Light, Green Light" with a horde of other demons and their human collaborators. To those who wouldn't know much more than what they could see, the event might look like nothing more than a bunch of dark figures running back and forth in front of my window or ducking behind bushes and cars when I look outside.

But, it's actually much, much more than an alternative to throwing rocks at houses [see VIDEO | Gang-stalkers caught on camera throwing rocks, skulking in dark] or any of the other form of harassment perpetrated by demon-human stalkers (known as gang-stalkers) [see VIDEO | Neighbors participate in demonic torture ritual; see also VIDEO | Little demon makes noise at front door to frighten]. It is also an exercise that fosters cooperative thought and action between a demon and the human it possesses, and develops and fosters the functional use of their respective abilities (or natures) to a degree that allows them to accomplish tasks together in high-pressure situations, while taking orders from and/or directing other demons and human-demon pairs.

From my perspective, it starts with hearing a noise outside my window whenever my back is turned; then, as I turn around to look, I will either see a shadowy figure running past my window outside or hear more rustling somewhere near it. If I look out the window, I will see several of these figures standing outside, either in my driveway or yard or next to a car parked across the street or in a neighbor's bushes; whenever I look directly at a shadow person, it ducks down or slips behind. This can go on for hours, and usually does while I attempt to capture video of this activity, and to otherwise make the observations necessary to properly ascertain the particulars of this exercise.

Finally, after having made those observations through my experience as a target of demonic terror tactics for over seven years, which includes over a hundred exposures to this particular type of activity, I am able to identify its participants and its purpose for them.

Two nights ago, I captured a video of two demons--one red, one green--directing traffic, which are shown in the following still frame:

NOTE | On March 3rd, 2016, I obtained a much better video of the tiny red light that is flashed to demons by other demons in order to bring a halt to certain in-progress activity or to prevent a given activity from occurring:

In the still frame above, the red light looks more like glitter; and, although the video reveals it as a red light to those familiar with this type of activity, but to persons unfamiliar with it, it probably still looks like glitter at first glance. Rest assured, it's a light; they do it all the time.

During this particular game of Red Light, Green Light, I received a notification of an e-mail on my iPhone, that basically stated that someone was at war with me: 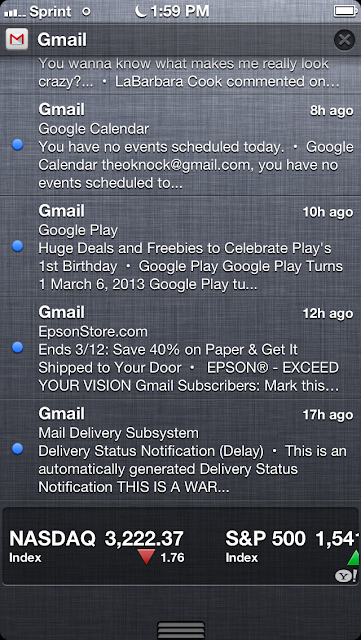 However, a copy of the e-mail was not in my Inbox, Spam or Trash folders. That fact, when combined with the otherwise unexplainable addition of an icon in the form of a crescent moon in the title bar at the same time the notification arrived and the time the activity took place, it was obviously sent by hobgoblin demons [see SCIENCE | Demons, portals most active during specific moon phases]:
In addition to the crescent moon, the trademark stylized eights also appeared [see PHOTOS | Hobgoblin demons stylize number eight into a logo of sorts], except, this time, just like the crescent moon shown above, on my cellphone and other computing devices.

How the game is played
When my back is turned, my inner demon signals a noise-making demon outside to make a noise. Then, when I turn to look, my inner demon sends to a shadow person a mental image of what he perceives through my mind that comes from my eyes. The shadow person uses this to time his speed-walk past my window, so that he passes the far edge just as I look. He broadcasts the same mental image to the group of shadow people scattered outside; these shadow people then look through my eyes to determine whether I am looking at them, and whether to duck or remain standing.

NOTE | This is how they evade capture on camera, in that they can whether I am looking at them on the view screen (and even if I am pointing the camera one way while looking at the other in order to trick them).

When they see I am looking away, they change positions, specifically, by running closer to my position. They keep coming closer until I notice them, at which point they duck behind the nearest object, mimicking the military's run, duck and cover exercise, which is likely intended to be an advanced form of the same. If I catch them before they can hide, they uncloak, and revert to their normal, human appearance, as shown on video in CRIME | Demons intercept phone calls to prevent recovery of lost proceeds from sale of home.


Red Light, Green Light enhances demon-human integration
As you can probably infer, this exercise is primarily for the benefit of the two types of possessing demons, specifically, those which work with a humans (shadow people) cognitively and cooperatively, and the one who uses the target subversively and covertly. For shadow people, it sharpens the skills used to access their inner demon's powers to the point that the demon becomes almost an extension of their natural selves; for the target's inner demon, it expands his ability to access the target's senses and movement impulses when the target's mind is the most resistant to such (during periods of fear, anger and heightened anxiety).

NOTE | The Voices Demons invoke or incite these emotions 24 hours a day, seven days a week, 365 days a year in their victims in order to create the harshest possible conditions possessing demons will encounter. By learning to exert control over the human's mind whenever they are angry or scared, they are almost assured full control in situations in which the human may be extremely focused or in fight-or-flight mode.

The origins of my exposure to Red Light, Green Light
Back in 2006, while pinned inside my home in Sunnyvale by what were then called gang-stalkers (demon-organized, domestic terrorists), I overheard one of the members ask a peculiar question to one of two persons in charge of the group taking over my home; specifically, it was Josh [see GANG-STALKING | Gang-stalker eludes to demons in confession to crimes], who has been mentioned on this site before, who asked Ariel, "When are we going to play 'red light, green light?'"


NOTE | The head of the gang-stalkers that invaded my Sunnyvale home in 2006 was Jon Harrington [see Gang-stalkers' ties to demons now definitive; see also Gang-stalker extorts my silence for return of stolen car]; however, on this particular occasion, it was Ariel, Jon's purported second-head .

I wasn't told what it was, and didn't figure it out until I saw on several occasions the red and green orbs, and noticed the relationship between their location and pathways, and the ebb and flow of shadow person foot traffic.

Tweakers are either demons' lab rats or future soldiers
This section is coming up; but, in the meantime, read the following posts: