A reader of The Life of a Demoniac (demonic activity.blogspot.com), Joseph Hernandez, describes perfectly one of the varieties of demons I now face, and even describes something that I haven't yet on the blog: that this variety becomes more solid in appearance as time goes on.


Gmail - Your Request to The Life of a Demoniac for help

His grandmother, a citizen of Manteca, California, is the victim, and I explain in a series of e-mail just how deadly these demons will be to her.


In my closet at 471 East Julian Street in San Jose, the skeleton-like head of a demon slowly emerging from its realm, mounted its head on top of the neck in a hanging jacket. Over time, he became more and more visible; and, at one point, he became physically violent. At that time, I took a can of hairspray and a lighter and burnt it until it disappeared into a fuzzy haze, and I am recommending the same thing to anyone experiencing this problem.

To see the results of one demonic fire-fight, read the following posts:

In the continuing series of posts related to gay men possessed by demons, or men otherwise beleagured by a demon's insanity-inducing tactics, I am posting a recording of a phone call made by Augustine New Moon, whose inner demon is expressing itself in this photo:
There's no point to the phone call, other than the fact that it's been made outside my and Long's door in the middle of the night, and cannot honestly be made in earnest:

This phone call was but one of the sleep-deprivation tactics employed by the demons at the time (specifically, December 2006 to May 2007), which persist to this day, as is evident in VIDEO | Gang-stalkers caught on camera throwing rocks, skulking in dark, for example.

There will be more on this individual—and the others—later; but, as good note-taking dictates, I'm posting what I can so far.

The other persons having relationships with demons and the like are described in these posts:


NOTE | The damage to my penis, as caused by demons, is shown and discussed in PHOTO | Damage to penis by demons extensive, irreparable.

As a result of this damage, last night, a doctor cited the damage to my testicles as the reason for prescribing testosterone replacement therapy:
My body now produces no testosterone on its own, and, without these injections, I would have none in my bloodstream.

This is why people who talk to the Voices Demons have been referring to me as 'she' both behind my back and within earshot for years now. In fact, I pointed out several times on this blog that others knew about the pending assault to my genitals, and even posted a secretly acquired recording in which two persons discuss it among themselves in AUDIO | Demons announced plans to damage penis to gang-stalkers as far back as 2006 and GANG-STALKING | Gang-stalkers warned of upcoming violence, death by demons.

The propensity of demons to modify their victim's appearance is discussed at length in Demons modify peoples' looks from birth to affect social standing, later to punish or control; their preference for social ostracization instead of secrecy is made evident in the songs that mock my penis, as heard in TRANSCRIPT | Yet another song about my sexual preference and penis and HOME | Resident's family heckles about sexuality, penis, and in other forms of communication, such as e-mails, which you can read for yourself in Bizarre communication usually follows demonic attacks.

The first question many people may ask is, how did a demon or anyone else damage your genitals without you knowing? To answer that, you only have to look at three videos, in which I am rendered unconscious after the sudden and unexpected appearance of demons (that, by the way, can lift right out of the very floor you stand on):

Once you've eliminated fear from the arsenal of the enemy, you have to add capability to yours. That means acquiring the talent and skills necessary to fight back, and the Technology posts on this blog enable you to do that in several ways.

Not only do they provide instructions for using your cellphone and computer to aid you, they also keep these otherwise useful tools from being employed to your disadvantage by explaining how technology can be used against you, and what workarounds are available in those situations.

To that end:
Because demons routinely employ technology in their nefarious agenda (see VIDEO | Demons (or other) hinder efforts to post to Facebook), this kind of knowledge and capability is a true hindrance to their progress, and that always gets their attention (see Demons vow seven-year incarceration over cellphone mods).

Demonic technology, on the other hand, is more sophisticated than anything described in any work of fiction, leaving only acts of sabotage and preventative measures as viable solutions to the problems they create. Even still, demons can be fought, and they have much to teach.

A three-second clip of a demon displacing air as it moved under cloak allowed for a determination as to the type of cloak some demons use, and, much to their consequence, ways of detecting demons in this semi-invisible state. Specifically, its cloak exhibited the same problems inherent to metamaterial cloaking, which is known to humans; specifically, the problems of refraction, made evident by the strong refraction of the light passing around the cloaked demon (similarly to a prism, which is transparent, but not invisible, because you can see the light bending as it passes through it) and opacity, as light passing through the demon was partially absorbed, making it somewhat opaque (or ghostly). [Source: Wikipedia.org]

In another video, a two-second run-by of one demon that looked unusually smudged and blurred as it ran past [see VIDEO TIMELINE | Hobgoblin Demon Springs From Floor] allowed for the determination of the type of radiation emitted by demons, which lingers after having used a hyperdimensional portal. While that does not have as many applications as knowing about the cloak, it does suggest ways to close or inhibit a demon's ability to move from place to place, instantly, as they have enjoyed for countless years [see Invisible demons detectable by radiation emission; see also VIDEO | Demon with needle-fingered black glove stabs internal organs].

Catching demons on video by surprise
It probably won't work more than a time or two, but, you could conceivably catch demons in your home or anywhere you suspect demonic activity using the iSight camera on your Mac using one of these two applications:


NOTE | If you have an assigned (static) IP address from your Internet service provider, or if File Sharing is setup to share with others outside your network, you do not have to be connected to the same network as the Mac broadcasting video. That means you could spy on your home from anywhere in the world, provided you are connected to the Internet on the receiving end.

Following are instructions for setting up these options.

Using Quicktime Broadcaster to spy on demons in real-time
Until my own set of instructions can be provided, you can try this video, which does an excellent job of explaining how to use your Mac to broadcast live video to another computer on your network:


Troubleshooting and other technical questions on the information provided in this video can be answered by theoknock@gmail.com.

The settings you use for your setup will depend on the capabilities of your Mac; however, for reference, I have provided the ones that worked best for me (notice behind me that my laptop is receiving the broadcast from the other Mac):
Automated and timed recording with Quicktime Player and iCal using Automator
In Automator, create a new Automator action, named Start Video Capture, that will be triggered by an iCal event, and which contains the following Quicktime Player commands: 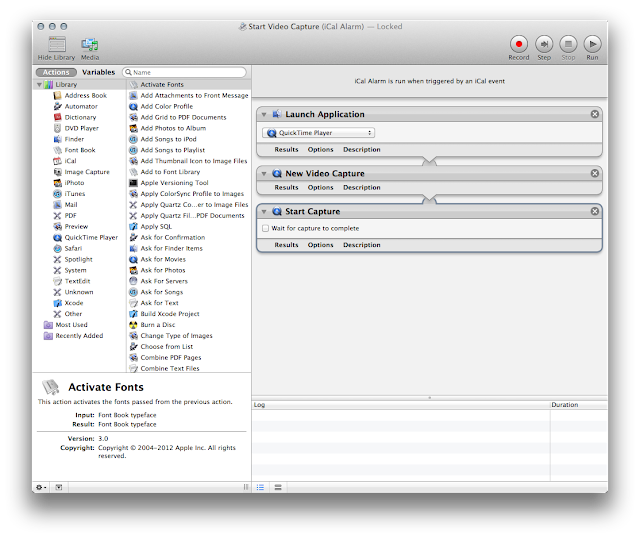 Then, create another Automator action, named Stop Video Capture, that can also be triggered by an iCal event, and which contains the following Quicktime Player and Finder commands: 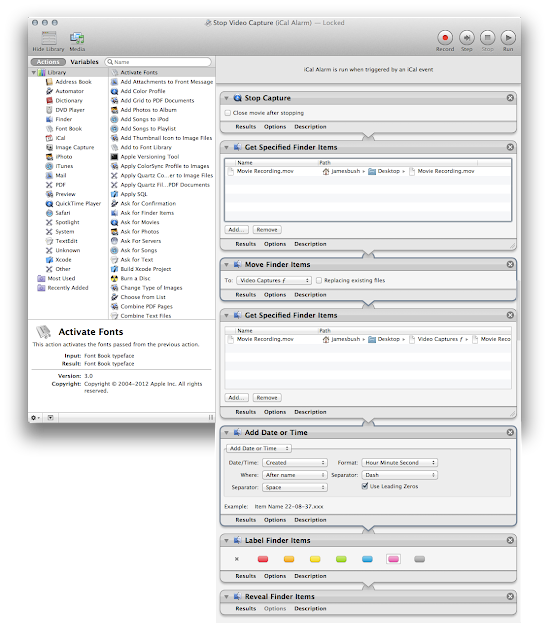 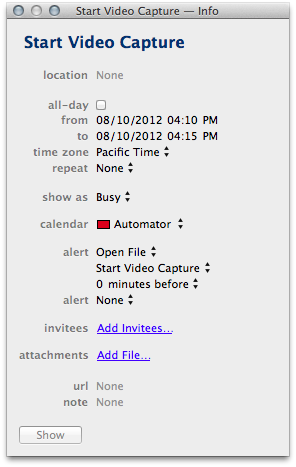 Then, create another iCal event that triggers the Stop Video Capture action at a later time: 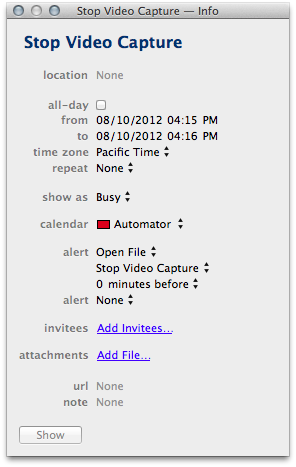 NOTE | Of course, the length of time between events should be based on an estimate of available free disk space.

Create new events for each time you want to record video:
The movie that is created by the iCal event-triggered Automator action will be placed in the folder you created; each successive movie will be named with the date and time it was created so that movies do not overwrite each other.
By James Alan Bush at 9/02/2012 01:57:00 AM No comments: Links to this post