Today, in spite of infuriating mistakes made by the dictation feature on my iPhone—none of which appeared in any of these e-mails prior to sending, but only after—I tried a different tack in obtaining a clearer vision of the road ahead for my legal initiative against VMC/PACE from my attorney: namely, honey instead of vinegar: 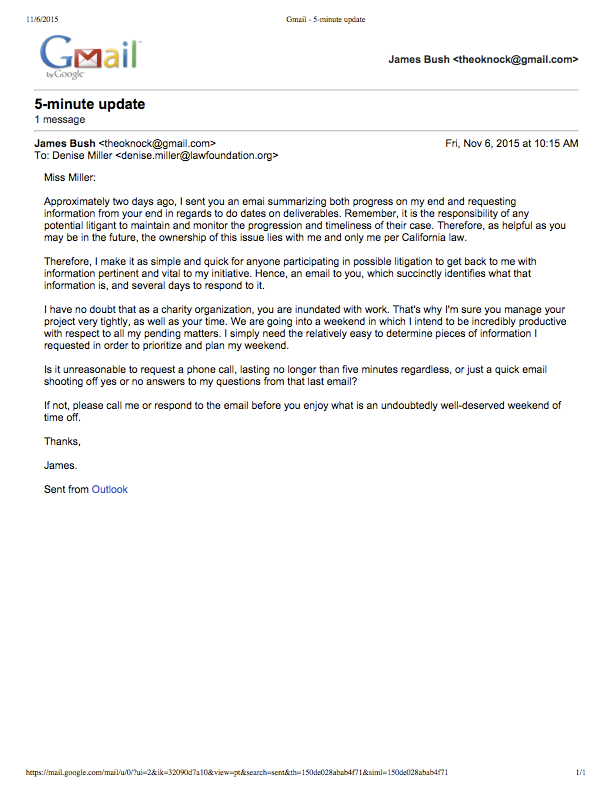 Before I describe the results of this e-mail, which I sent this morning, I want to point out another place where demons fit into the picture: As a professional writer, misspellings and (whoa!) entirely missing words are an anathema to me, and ever since the last two battles involving me and demons (not recounted on this blog), my phone has been acting strangely whenever communication with third-parties are involved (in fact, this is the reason for the second battle, casualties for which are still being counted even today). Do not f*ck with the phone is the message, although I'm not sure it's going to be received. The problem manifests itself when using dictation, which, when modified by demonic detractors, translates words and phrases spoken into the iPhone when composing e-mails and text messages, returns absolutely ridiculous results:
What's more, is the dictation software will alternate the translation of my speech between the right and a wrong word or phrase three or four times right before my very eyes, sometimes choosing a wrong one just as I touch the Send button. The two examples above do not even begin to show the absolute nonsense I put up with all day when composing e-mails and texts. Sometimes, it makes more subtle mistakes: surreptitiously singularizing the plural or later omitting words it spelled out at first (as if there was no grammar check on auto-correction).

When it happens, it occurs overnight, and always following a series of bitter-pill responses (demonic vernacular) to a given defeat of demons by me in a battle [see ESPAÑOL | Demonios ardientes con el fuego; see also SCIENCE | What it looks like when a demon dies] or challenge of some kind.


NOTE | I recently negated (CIA vernacular) a stockpile of noggin' crunch ammunition, and to great effect.

Anyway, back to my results with the attorney assigned to the case; they are quite encouraging, in that some action has been taken, and it looks to be comprehensive at first glance. I'm not used to somebody doing something at all on my behalf, so I'm a bit giddy over these:

Gmail Updates from Denise Miller by James Alan Bush
It would appear that things will progress in one direction or another relatively soon, which is what desperately needs to happen. In the past, not having required that deliverables be identified and due-date expectations set has wasted a tremendous amount of my time. I believe that demanding this from Joseph Nazarian, who bowed out of the Crapo case right after he was asked to update me on his progress, ended that relationship in short order.

In sum, demons and their people don't do timelines and project schedules because those would reveal their agenda (to waste your time, nullify your options, deny your rights, etc.):

While that may not sound at all as nefarious as the murders demons and their people perpetrate in tandem all the day long, believe me, it's part-and-parcel to same.
By James Alan Bush at 11/06/2015 07:06:00 PM No comments: