I'm not feeling my usual witty, poignant writer-self today. After having confronted my family for endangering my life with talk of being a pedophile [see Voices Demons: "Your family will be arrestable"], I've been ejected from my home—with no money, no place to go, no warm clothes, no transportation, no medical care, etc. It is raining, and I am hungry.

Plus, any word on Elizabeth, the woman-now-angel that is the subject of this post, deserves my best effort, because she gave me hers. Right now, circumstances stand in the way, and I just don't have enough to give; my immediate needs, just like hers were (as you'll see below), are big.

Still, something must be said—and said right now—so I'll just post what I have, and finish it when I can. There's plenty there for you to get a general idea of how this rare jewel died, and how unfair her life was right at the end.

But, first, a word of caution before broaching this situation in anyway tangible way: I will unleash Hell on anyone who thinks she brought this on herself. I am done with ignorance; I will punish it. She was not a drug addict. There is no such thing to those who know the truth. Besides, according to a relative, the autopsy suggests that there were no drugs in her system; therefore, there was obviously no overdose, let alone use. If you ever thought otherwise (and, you know who you are), consider the position and state your life is in, and make corrections and adjustments a top priority.

One more thing: Before reading this post, you should read Demons prefer suicide to murder; then, read (and see!) how demons possess trees and bark, in:


Our pseudo-long-distance relationship began when I received this letter from her while in jail nearly two years ago [see READER | Michigan woman pens letter to jail, advises abstention from drugs, sex]:


Before she died, she sent this to me via Facebook Messenger, her last such message: 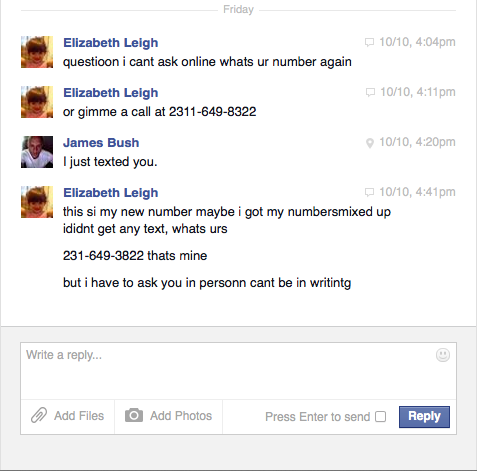 This was followed by her phone call, her last such call, in which she wanted to know how to inject painkillers (I do not know how to do this, and said so).

Two days later, I get this: 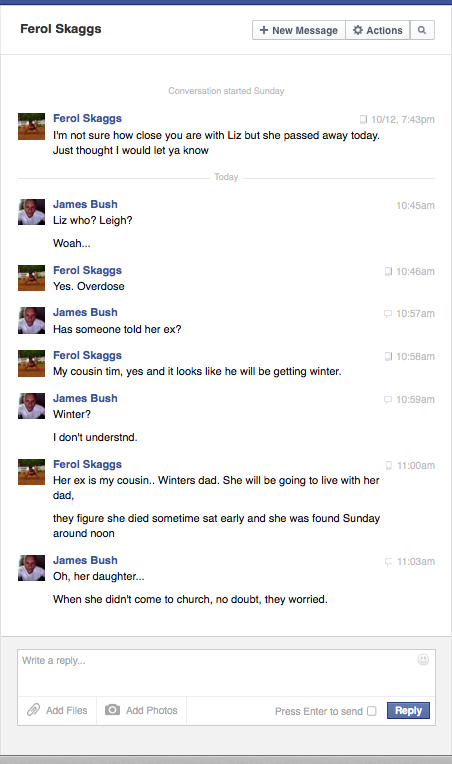 What a difference a year-and-a-half makes; but, I'm not interested in talking about that at all right now. What I want to do is go back one Facebook Messenger message before that last one, where Liz told me that demons were creeping up on her outside, on her property: 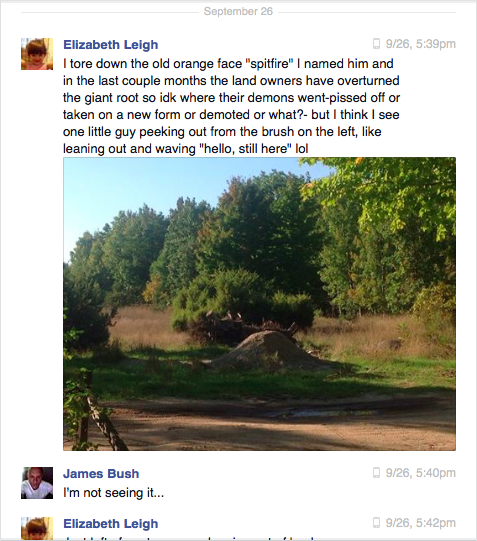 Here's what she's talking about:

I didn't even bother looking at these at the time she sent them, and I barely had time for her call. If you follow this blog, you can easily see why I was (and have been) distracted. Still, I will not use that as an excuse when God holds me accountable for her death to the degree to which I am.

I mean, all I had to do was give a shit about just one of these problems—the demon problem notwithstanding—and she might have felt like living:

So, that was her entire life for about the last two weeks of it, except for one little thing I haven't mentioned yet:

Here's what she said about her daughter, above—and her death—about three months ago: 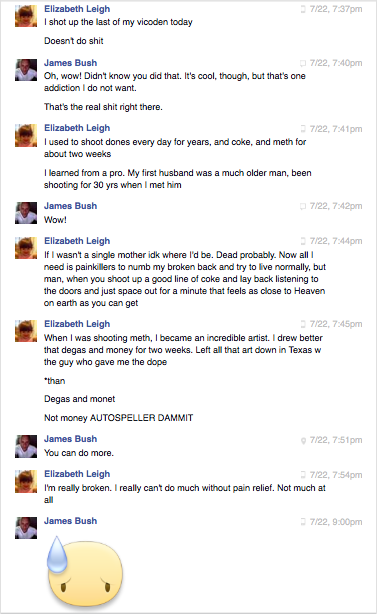 So, that's where things ended up, anyway.

More tree (and bark) demons
Liz sent photos like the above of tree (and bark) demons over the course of the six months we corresponded online; here are some of the better ones:
I highlighted just one of the many tree demons in each of Liz's photos; there were more, but these are the most interesting and/or most obvious ones. Click an image to enlarge it.

November 23rd, 2014: Absence leaves emptiness long after death
Long after Elizabeth's death, I am reminded of her significance to me in the smallest of gestures:
Because of her and her death, I never see a difference in the "size" between gestures of support; they are all significant. There is no small compliment or token of thanks. Thanks is thanks. Support is support. Everybody has something to give someone who needs. Elizabeth had nothing. Nothing. Needed everything. She still gave anyway. Worthy citizen of Heaven, to be sure.
By James Alan Bush at 10/15/2014 09:44:00 AM No comments: Links to this post