This post is getting longer and longer the more I realize just how much back-story there is to even the littlest of blanket-demon photos; so, I'm cutting off any continuing edits and updates to it for now. This should be enough to entertain you, inform you, and possibly even educate you; but, you're going to have to do a lot of reading for any of that to happen.

Like anything else worthwhile in this world: if you want it, you're going to have to work for it. Happy reading!

By the way, this is a great post for new readers to start with, and I fully expect new readers to follow every link inside this post. Why? I micro-cast this blog to members of paranormal groups because I'm only interested in such for my audience; I'm not looking for Joe Blows off the street, looking to be entertained, and expecting perfection. As a proclaimed paranormal enthusiast (i.e., someone I advertised this post to), your inborn scientific curiosity demands that you examine every shred of evidence placed before you—that means keep your criticism to yourself until you've made the requisite effort.


A loyal reader and friend, LaBarbara Cook, wanted to know if my demons had followed me from California to Indiana, seeing as I haven't posted anything new to my blog since coming here: 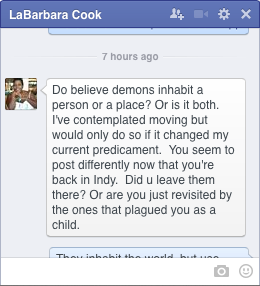 This post answers her last two questions; but, first—for the record—I want to point out that this blog is as busy as ever, as far as traffic and interest go [see My unpublished drafts, published for the latest reader statistics]. While, it's true that I haven't posted many new posts since coming here, I have majorly appended and updated ones, the most significant and frequently updated posts being The Death Wish of a Demoniac and Darius "Doll-Maker" Domingo, murdered; jailed killer brags to me, inmates.


NOTE | Crime and drugs are the hottest topics right now, for whatever reason.

I've also been answering phone calls and e-mails from people whose lives are looking more and more like mine:


Not only am I provided individual help to persons who ask, but I've been preparing responses to the occasional researcher request for specialized input into projects they are working on:

I give special priority to requests such as these, as I intend to do with respect to this future book author, in order to stop the proliferation of ignorance and disinformation within my speciality area.

Second, I don't blog all the new things that happen, but I do update events that I've already blogged, or things I happen to catch on camera. I'd say that comprises about 10% of the going-ons overall, with a similar interest factor. Catching a glimpse of other worlds through holes in the air is quite interesting, but quite unbelievable, so I leave things like that out unless I catch it with my iPhone.

Also, daily posts would be mundane to readers, who are probably looking for something new; and, like everyday for the past eight years or so, day-in and day-out consists of the same, routine physical abuse dolled out by the Voices Demons and their ilk.

What has changed, however, is the location—Indiana—and that's what the reader wants to know about.

Grandma's condo established by demons as "area of confinement," place of continuing torment
Before reading this post, learn what a demon-infested homes (or buildings) and people are by reading these posts first:
If you don't read these posts, you won't get a feel for what life is like in Indiana right now. Sure, you might see an interesting pic or two, but you'll miss the inference and implication. Moreover, if you don't read the posts they link to, they won't tell the whole story, either.

Here's a summary of what you need to know by the time you've brushed up on the essentials:

With respect to the goal of using these weapons in an area of confinement, the Voices Demons said today, "They(?) want people looking old and gray before their time," which is akin to what they've been saying all along, as I mentioned nearly two years ago in Demons modify peoples' looks from birth to affect social standing, later to punish or control.

What's also old news is the Voices Demons attempt to cause insanity, which seems to work more on the people they enlist for help than me; nevertheless, this is what they've been saying about that for the past two years or so:
All of this has been the story from the beginning; nothing has changed. Not even by moving to grandma's house...

Introducing the demonic plague, Hoosier-variant (or, Grandpa's blanket demon)
Bedrooms, and, in particular, the bed, is the primary demonic battlefield. Many of the initial posts to this blog from 2011 show videos and pics of demons attacking me in bed, such as the video of a blanket demon leaping up into my face, just one of the things it had been doing all night while I tried to sleep, or the one with the snake-like sucker demon slithering between my sheets, or the one with the miniature hobgoblin demon fighting me for my pillow [see VIDEOS | Demons use my bedspread four times to frighten; see also VIDEO TIMELINE | Sucker Demon In My Bed and VIDEO TIMELINE | Miniature Spectre-of-Death Demon Pulls and Shakes Pillow].

This hasn't stopped. I'm now sleeping in my deceased grandfather's bed—versus Little Orchard's bunks—and here's who I'm sharing it with:

NOTE | This isn't the only thing crawling around inside my bed; but, it is the most easily photographed due to its size.

The video from which the above still frame was taken:


This is which demon horde he belongs to:


That's not the only stylized-eight flashed by demons in this house, either. A routine camera sweep during a period of high demonic activity revealed a very creatively constructed logo of this sort behind the washing machine; it was made out of a string of dust, a yellow clamp and the light reflected off a pipe ring, located behind the first two items. When viewed from the very angle of the camera (and no other), the three form the stylized-eight. This was done in the same manner as the optical illusion "artwork" created by the Spectre of Death nearly two years ago:

Somehow, the demon who constructed the stylized-eight knew where I'd point my camera—and when and what angle—and arranged for this little surprise.

Hard to believe? Take a look at the stylized-eight fashioned out of my body hair in PICS | Demon horde 'OCCT' flashes stylized '8' in shadow, body hair.


NOTE | What is the stylized-eight? See Demon-styled 8's popping up all the time, everywhere and Possible meanings, purpose for number 8 symbol explored and PHOTOS | Hobgoblin demons stylize number eight into a logo of sorts.

Finding them was harder than usual, as they been concealing themselves as shadows around the house. In the image below, there are two such demons—one cast as the shadow behind the flag memorial; the other, a much smaller version cast as the shadow by the night-light. They are identifiable only by the shape of their pointy hats and squared-off shoulders:


Without past photographs for reference, I would have never spotted them:

Don't think demons can be shadows? Not only can they form as shadows, as shown in VIDEO | Shadow demon revealed by inability to cast beer bottle's shadow, but they can be mirror reflections, as shown in Mirror demon poor imitator of real thing.

Here's a past example, by the way, of the secret builder demons' work with attic insulation:

For more information on these photos and the demons that sculpted the head shown in them, see Demons in the Attic.

Introducing the sole occupant of the house: grandma, whose inner demons were discovered by digital camera in the same way as described in PICS | Possessing demon revealed in man's eyes, hands:

These are just three of the five shown in less than two seconds of video footage.

Demonic possession explains baffling family behavior over past two years
Demonic activity has been somewhat of a family tradition over the past two years, although, unbeknownst to me, it involved possession of family members—not just their ties (or allegiance).

Correcting the mistaken assumption of whose demons are whose and where the problem began
From my standpoint, the problem got attention from California, starting with my blog; but, it really began in Indiana, starting at age 5 [see Childhood demon behind most recent attacks]. Did moving help, would have been the most appropriate question; and, the answer is: it wasn't meant to. It was only meant to move certain fires away from its fuel. And, that it did.