This is a draft of an upcoming post on processing photos and videos showing demonic possession. Check back often for updates.
A Photoshop action is currently in development that automates the procedure for revealing a possessing demon in a video or photo of the subject sitting in near total darkness; it is intended to expedite the application of a procedure comprised of a significant number of steps, and is particularly useful for processing videos of demonic possession, as it can be quickly and easily applied to still frames, which often number in the hundreds or thousands:

Source image quality requirements for the Photoshop Action
The settings for the filters and adjustment layers are set to work with a photo (or video) made with an first-generation iSight camera, and with the subject sitting in front of the camera at a distance where only the head and neck are shown (never less). If you try to use the action with an image that is higher or lower in resolution, one with a smaller colorspace, or one where the subject is not sitting at the specified distance from the camera, then the resulting image from the action will be completely distorted.

Lighting guidelines for isolating the human and demon separately
The lighting on the subject and in the room can be set to exclude the demon, showing on the human, and to exclude the human, and show only the demon. While both can be seen at the same time under certain circumstances, such as when the demon is particularly bright, allowing the light emitted from it to penetrate past the relatively much stronger light reflecting off the human, and/or if the radiation emanating from the demon is strong enough to superimpose its face on the digital image even over that of the human (although, the latter requires the camera and/or the human to be in motion, at just the right speed and the right distance, which are different depending on the variety of demon).

This section only addresses the staging addressed first, on which the subject is seated as described in the previous section, and the goal is to isolate the demon from the human in the video or photo:

At the light level prescribed for showing only a possessing demon (above), the demon is actually brighter than the human because the molecules of a human reflect light, and the room is dark, providing virtually no light to reflect; however, the molecules of a demon are different. They emit light at the same frequency as the light they reflect (meaning that the light you see is not just light reflected off the demon, but is also light that is emanated from the demon at the same frequency that it reflects).

less light from another source is   of light is needed to cause the demon's molecules to give off light of their own, which  thabut i a brighter demon than human, because the The caveat is that the light must be low enough to conceal the human, but bright enough to reach the demon so that it can amplify what it receives; if the light is too bright, the demon's

Although the brightness is not enough to create the contrast the human eye needs to perceive the demon on screen, it is for the image sensor of the iSight camera, which will give all pixels comprising the demon a slightly different shade of black. In Photoshop, you increase the contrast between the different shades of black large to make a distinction between them that the human eye can see.

How Photoshop widens the gap between a dark room and a dark demon
This is done by increase that difference by substituting a different color to all shades of black lighter than the darkness of the room (he brightness can be  is will be increased until the demon can be seen; the room will stay black, and for every shade of black, another color will be substituted (such as red or green), and the contrast between the shades will be increased so that a distinction between the shades can be made (the room will stay black, and the next highest shade of black will be increased in brightness.

It is the relatively monotone coloring of the demon and the separation of color channels in a digital image that enables Photoshop to isolate only the parts of an image that comprise the demon:

When applying the tone and contrast adjustments to all channels (red, green and blue), the processed image would look like this:
It is the contrast in brightness between the polarized light from the cloak of the demon and the reflected light from the surface of the human's face enables Photoshop to exclude the human by narrowing the tonal range of colors in the image to that of the demon:
Without the distinction made polarized light and reflected light, and absent the capabilities of Photoshop, the image of the demon is concealed, as it is in the original image:
In addition to increasing the visibility of the demon while excluding that of the human via adjustments to the tone and contrast of the color channel in which the image of the demon is naturally isolated, the action performs—or will perform—the following steps, in general: 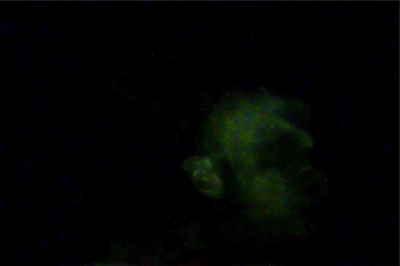 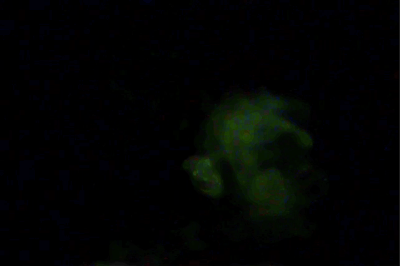 
Although incomplete, the Photoshop action (.atn) file currently in development can be downloaded from DropBox. [Download Demonic Actions.atn]

The Reveal Demon-in-the-Dark (green channel) action was applied to this video:

These are the (messy) notes I'm working from right now, as I complete and refine the action: