In my last video filter-processing tip, Blending Quicktime Video Layers to Penetrate Demon Cloaks, I provided a Quicktime video layer blending combination that will expose hidden and hard-to-see demons shot on video in darkly lit environments; however, the caveat is a loss of original color, in that any two colors that are similar have to be drastically changed in order to better distinguish between the two.

For example, 10% gray and 11% gray, which are virtually indistinguishable from each other, must be changed at least by 10% to be distinguishable, resulting in a wild-colored video. This is fine, if you're looking for otherwise impossible to see demons; but, if not, retaining the natural color of the video is far preferable.

The still frame below is a perfect example of an over-dark, over-saturated video. In the background, there is very little detail—the shelves on the cabinets blend together; the only distinction among them is there distance from each other. Also, my lips are way too red, and there is a color blotch on my cheek and lower eyelid; moreover, my skin is a blotchy and pinkish, and my lips are ruby-red.

Overly dark areas in a video are not just caused by dimly lit environments, but also over saturation, which is common is cheaper digital video cameras. To correct both, that is, to expose detail in dark areas of your video and correct the over-saturation, duplicate the video layer of your Quicktime move four times (for a total of 5 layers), and set the Graphics Mode to the following values:
Then, make adjustments to only layers 3 and 5—the blend layers—until you can see detail in the shadows, just like in the still frame below. 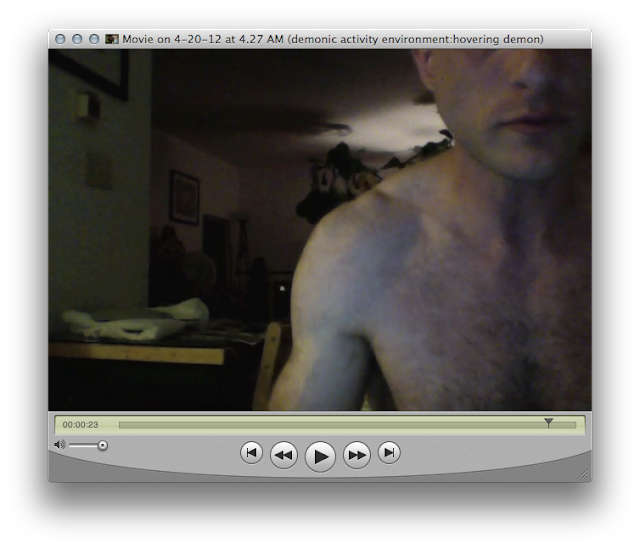 The change is subtle, but look closely at the following:

Text dimming
grayishTextOr
Dim the destination. If in color, replace it with a blend of the foreground and background; if black-and-white, replace it with dithered black and white. This mode is used primarily for text.

Add Dithering to Transfer Modes
ditherCopy
Replace the destination with a dither mix of the source and destination.

Transparent mode
transparent
Replace the destination with the source if the source is not equal to the background.
By James Alan Bush at 4/22/2012 06:21:00 PM No comments:

The Voices Demons have railed against the fact that I have a roof over my head, and am in loving possession of my cat, Scratchen.

It has been their oft-stated goal to render me homeless, at all costs; and, last night, was their latest attempt to oust me by police intervention. The story, as posted on Google+:


A crazed Victor Salazar, my new--but soon-to-be former--roommate, burst through our chain-locked front door tonight in a fury of explitives, as if the demons plaguing every corner of the house weren't enough.

His excuse: he doesn't like the front door to be locked. He said that it was immature of me to use it, and that no one is going to rob us.

As his tirade continued, which consisted of more ranting, further raving, and the occasional lunge preceded by a fighting stance, I called the cops.

Long story short: the cops make him leave the apartment for the night, and the landlord, who mysteriously shows up out of nowhere, asks me to leave permanently.

As that was the plan anyway, I'm happy to oblige.

There's definitely more to this story; but, for the first time since all of this began, I'm going to move on without investigating things.

The hitch in their plan to rile me up and then call the cops is, happened when I stayed calm and called 911 first, just as I was taught by an anger management instructor, who is quite aware of the demon problem in San Jose, and is therefore privy to their tactics; basically, I didn't react in any way negative, as the demons and others had hoped, and which could have resulted in my arrest, but, instead, when my roommate burst through the door, busting the chain lock in the process, yelling expletives, throwing things and charging at me as if he was going to hit me (I could tell he was working up the nerve).

Instead, I stayed as calm as I could, and I simply asked the Santa Clara Police Department to escort him from the premises for the night (versus filing charges, since that is a despicable act, considering that the demonic agenda is intertwined with the penal system in this area).

Still, even while dodging one bullet, I was hit by another: the landlord, who mysteriously and inexplicably appeared while the police were at my apartment, asked me to move out as soon as possible, which was nothing more than what he had planned to do before I even moved in, per the Voices Demons.

NOTE | A scheme to generate a list of incidences that can be used to disparage character has been at work for some time, and is intended for use as a defense against my lawsuits, as well a use in future criminal proceedings. The landlord's request immediately follows the eviction from my last apartment, which was not only unlawful, but unwarranted (an appeal has been filed, and a judicial council review for misconduct is planned).
By James Alan Bush at 4/22/2012 01:31:00 PM No comments:

If you missed church this morning, subscribe to Joyce Meyer's podcast on iTunes. It won't make up for "forsaking the assembling of ourselves together," [Hebrews 10:25], but you'll still be better off.

In her "Battlefield of the Mind" podcast radio and television series, Joyce Meyer talks about the tactics the devil uses to gain a stronghold in our mind, so that he can later use us as tools of evil; she explains how the Holy Spirit helps us recognize those tactics, and how the word of God teaches us to overcome them.

The following excerpt from her related title, "Battlefield of the Mind," explains it better:

Not so coincidentally, these tactics are the only ones employed by the Voices Demons, who are invariably on the front line in any every demon offensive. In preparation for an attack on the mind, Voices Demons surveil their target unknowingly for years, and even decades, before any other kind of demonic attack, in order to gain knowledge about how you think and what has happened. They are so effective at working that knowledge into guilt, anger, sorrow, and other negative emotions by and through their intimate knowledge of how you think, that no one who has ever strayed from God could withstand an attack without His guidance and protection going forward.

If you think your past experiences or present circumstances have left the door open to an attack on the mind by the devil, make a point to get in right-standing with God, right now. And, for added support and encouragement—and to know exactly how to shore up past hurts and regrets in anticipation of the very kind of an attack the devil (and Voices Demons) will bring—listen to the Battlefield of the Mind series from Joyce Meyer on iTunes.

TIDBIT | It was from one of Joyce Meyer's messages that I designated "Sucker Demons" to the demons so ascribed. If you've been attacked by Voices Demons, or have had any relationship to or experience with the demons plaguing the Bay Area of Northern California, you will immediately recognize that Joyce Meyer has had such experiences, too, just by the way she talks and the things she says.

Online calendar to create a timeline of demonic activity

Going forward, any significant event related to demonic activity, whether past or future, will be published to my Google Calendar.