It's 2:30 AM, and I'm walking down White Road towards Alum Rock Avenue in San Jose, about 15 minutes away from Calvary Cemetery; that's where Google Latitude says Sally, the tranny with a red-masked demon in her bosom, is right now [VIDEO/PHOTO | Tranny harbors demon in bosom].


So far, I've encountered the usual monster mish-mash that always surrounds my home during periods of high demonic activity. The only difference tonight out of a hundred such demon-filled nights is the unusually high number of cloaked humans afoot.

Shadow people are everywhere tonight: the rooftops of houses and buildings, alleys, people's yards, and the middle of the street, as well as right behind me and in front of me; by contrast, there are only a handful of Spectre-of-Death demons [see VIDEO TIMELINE | Spectre of Death, Camouflaged], standing, unmoving, in front of building facades [see VIDEO | Spectre of Death Guards Entrance to Scratchen's Apartment].

If you think the presence of just a few demons would be nerve-racking enough on its own, let me tell you that it is doubly so given  the number of humans involved. The demons I can handle. With them, one can be reasonably confident that they have accounted for your presence and interaction with them ahead of time, and that there is very little you can (or will) do that would compel them to act in any way untoward; otherwise, you would not be there and/or neither would they. Knowing this frees you from any concerns that you might have about walking around and among these deadly creatures.

Humans, however, are another story. They terrify me, in that not only are they made unstable and unpredictable by the mind-altering chemicals they ingest in order to cloak and speed-walk (the characteristics that identify them as shadow people), but, also, in that they are made even more so by the inflated sense of empowerment inherent to the latent (late-in-life) acquisition of demonic abilities.

NOTE | I am not trying to typify humans recently acquiring demonic abilities; I am also scared of drunks on the street at night [see CRIME | Flee from attacker all but destroys only valuable possessions]. It's just that they are aggressive and confrontational, which sometimes leads to assault.

The first thing a human thinks of when they get a "power" is whose ass they can kick—never about who they can help, or about the creeping-crawling thing that gave them the power to begin with. That goes whether the human is good or bad. The only difference there is who they point their power at. In my case, that was towards demons (because I consider myself against them, which some may say is "good"); but, for those on the side of demons, that would be towards me and others they are targeting.

So, as you can see, no matter what, any human will start shooting when a gun is handed to them, so to speak.

The Voices Demons sent a couple of people without shadow people powers to intimidate me along my walk, as well; this comes right on the heels of an attack by a man looking similar to the ones I encountered just now [see Court papers filed against assailant for demons].


So, with all of that going on, why am I still going to a cemetery to spy on a demon that eats human flesh?

As if I had to answer!

Yesterday, it was revealed that Sally was conjoined with a red-masked demon, and that she and her demon were involved with mine; so, I want to know what she's doing in a cemetery in the dead of night. Earlier in the day, Sally unleashed her bag of demonic tricks, alternatively needling me in the head with her spiked hand, and stealing pieces of flesh from my body. Upon the latter, She would discreetly place my flesh in her mouth, swallowing without chewing. That's right; the very demons I've been writing about are cannibals... 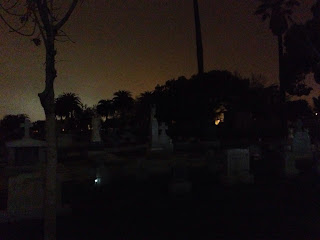 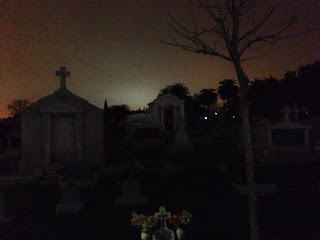