#517 - Responses to request for FBI help

In my ongoing effort to pinpoint exactly where help exists for a problem such as the one described in this blog, I have expanded my plea for help to the FBI from its original scope of just paranormal investigators.


NOTE | To see those results, read READER | What's the difference between a ghost and a demon?

In order to keep the request relevant to the intended audience, I complained only of crime--making no mention of anything supernatural per se--and sent it to 33 FBI field offices around the country last night via e-mail:


I'm having difficulty getting an answer from my local FBI field office, so I'll try another...

At the URL below, I describe a death threat made to me, which is followed by videos showing that death threat being attempted, along with photos of the resulting injuries:

You'll need to follow the links on this page, and then watch the videos before responding to my question (forthcoming); the content is so bizarre it defies explanation and belief unless you do.

Once you're up-to-speed on this issue, my question to you is: to whom do I report this type of crime, and what do I do if my complaint is ignored or mishandled?

Obviously, I consider this urgent.

All responses received so far have either stated that my request was forwarded to the San Francisco field office, or have advised me to contact my local police department. 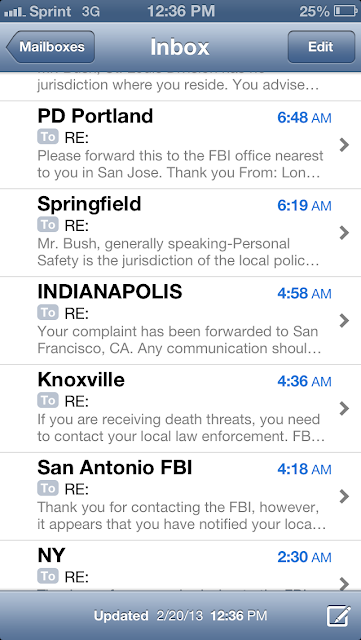 The following two responses, however, are markedly different:


From the New York FBI Field Office:
Thank you for your submission to the FBI New York Office.

Unfortunately, the information you provided is incomplete and/or vague. For this reason, we are requesting you provide us with additional information by replying to this email.

In your reply, please include the following information:
Thank you,

From the Miami FBI Field Office:
Do these videos and/or photos shown an "actual" attempt, or is it a theatrical video to show what may happen to you? What is the reason for the threat against your life? Also, have you attempted to call the local authorities on the matter?

In 2008, I was assaulted by a police officer, who was later found guilty of the same type of assault four months later, and was subsequently suspended from the force [read the entire collection of legal documents on my case against this police officer on my Scribd.com page]. This, plus other facts, led to enormous credibility to my claim of assault. The FBI is required to act on complaints of police brutality in a specific way per Department of Justice mandates; however, in spite of overwhelming evidence that not only was an act of brutality committed against me, but was also planned, they failed to take the requisite action on the complaint.

Here's the letter written to them in regards to this matter:

Follow-up Letter to the FBI in re Investigation of Brutality Claim against San Jose Police Officer Miguel F... by James Alan Bush
Many of the responses from the FBI on this issue advised me to contact the local police department. For example:

You should report this to your local police department, as well as the Internet Crimes Complaint Center, which can be found at www.IC3.gov.

A second request is now being sent to the remaining offices; it reads:

I'm having difficulty getting an answer from my local field office on this issue, so I thought I'd try another--specifically, yours...
At the URL below, I provide a death threat made to me, which is accompanied by videos showing attempts at making good on that threat, and which includes photos of the resulting injuries:
http://demonicactivity.blogspot.com/2013/02/human-collaborator-announced-my-death.html
You'll need to follow the links on that web page in order to watch the videos, and before responding to this complaint; it's too bizarre to explain, so you'll need to do at least that much to believe it.
Once you're up-to-speed, please tell me to whom I report this crime, how I can get help and when I can reasonably expect it (and what I can reasonably expect), and, if I am referred to another agency, such as my local police department, what my options are if this situation is mishandled or ignored.
Obviously, time is of the essence.
Sincerely,

This particular request only went to the five remaining offices that have e-mail addresses (not all field offices have an e-mail address available to the public).
By James Alan Bush at 2/20/2013 09:26:00 AM No comments: Links to this post