I always thought it was the power that drew people to demons offering it; but, my cyberstalker set me straight on that earlier this morning with this e-mail:

Now, you all know. Hopefully, when my death finally happens—which is apparently going to be real soon—everyone will renounce evil, and, of course, start humble lives as God-fearing Christians; however, based on the history of e-mails and letters I've received from this person, I'd say probably not (given that old habits die hard, and all that):

NOTE | For more on this stalker and others, search for stalker on this blog.

Non-anonymous harassment occurs simultaneously with anonymous stalking
This reader (and others like him) tend towards conversations just like that shown below right around the time I receive a stalker e-mail like the one above. They are always the same, and there is usually about 3 of them each time the blog gets a few good pics or videos. This is just one of the dozens upon dozens of nearly identical conversations I've had with other readers like him.

They almost always accompany or proceed every time I have a violent encounter with demons and their people; they are always unsolicited, from people I don't know but like to pretend they do, and appear to be calculated to annoy and insult and taunt.

As you read it, keep in mind the other person knows full well about the attack, and is playing dumb about the existence of the demons, the scope of the problem, and the reality of my injuries (notice the avoidance, even after continuously being led back to the topic). This is about as disgusting as it gets to me, particularly because this person knows about my devotion to God, knows his own and demon peoples' aversion to Him, and decides to mock using that: 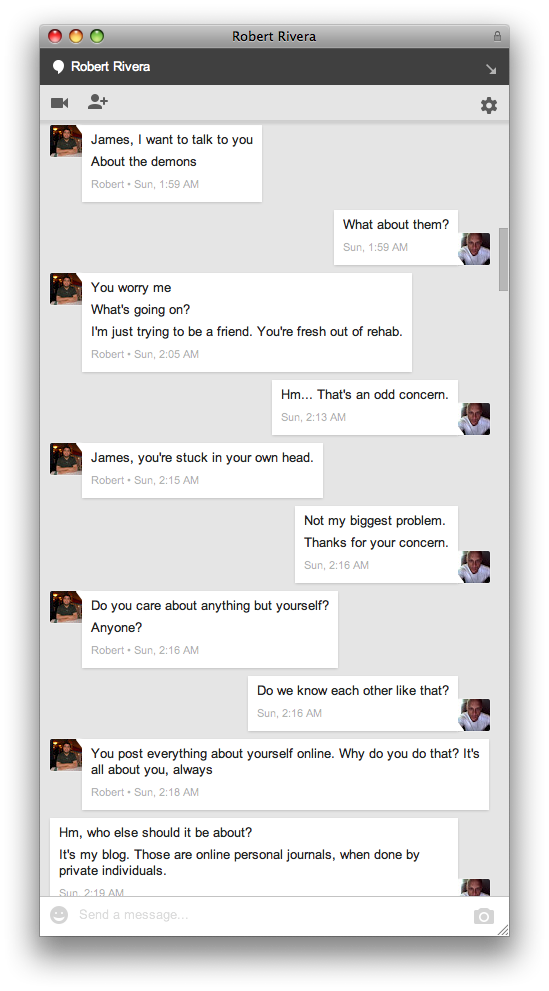 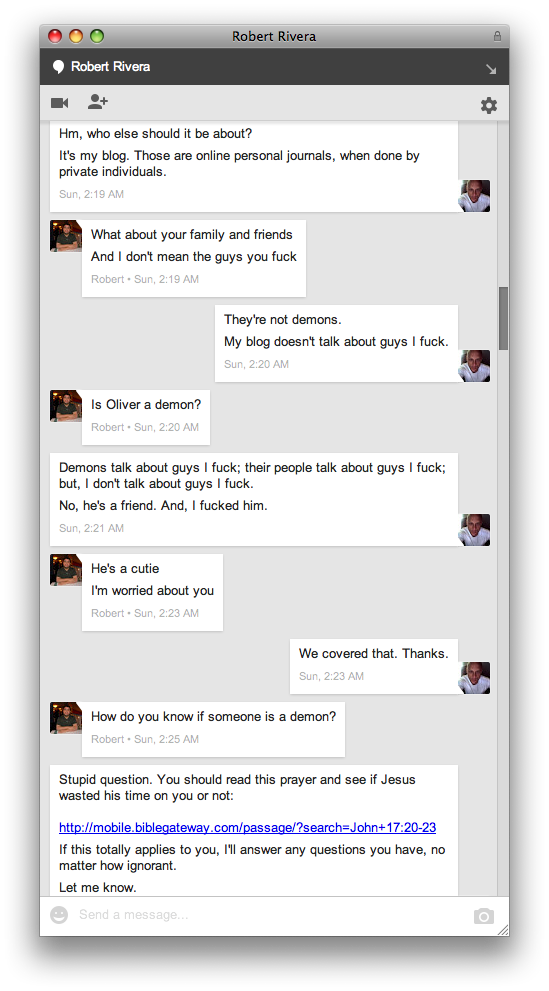 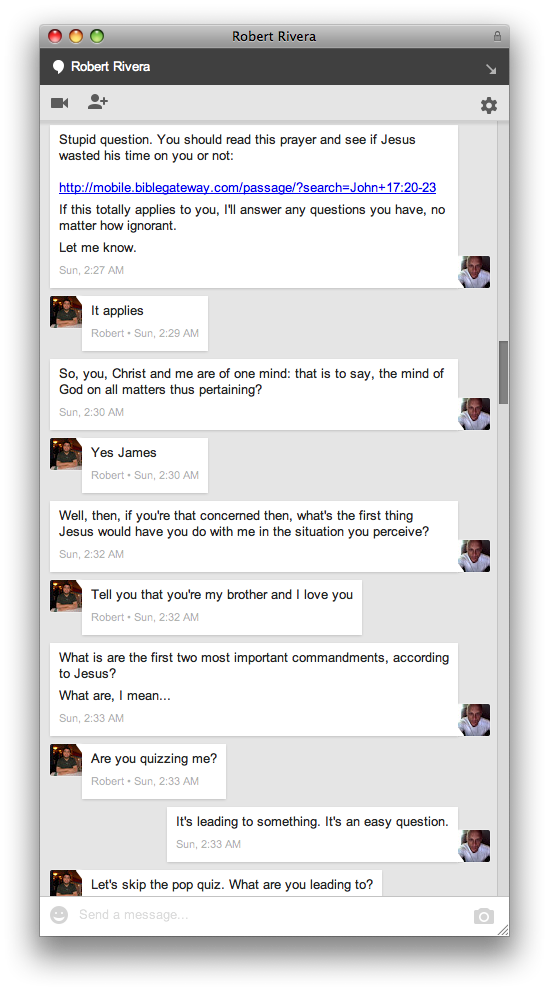 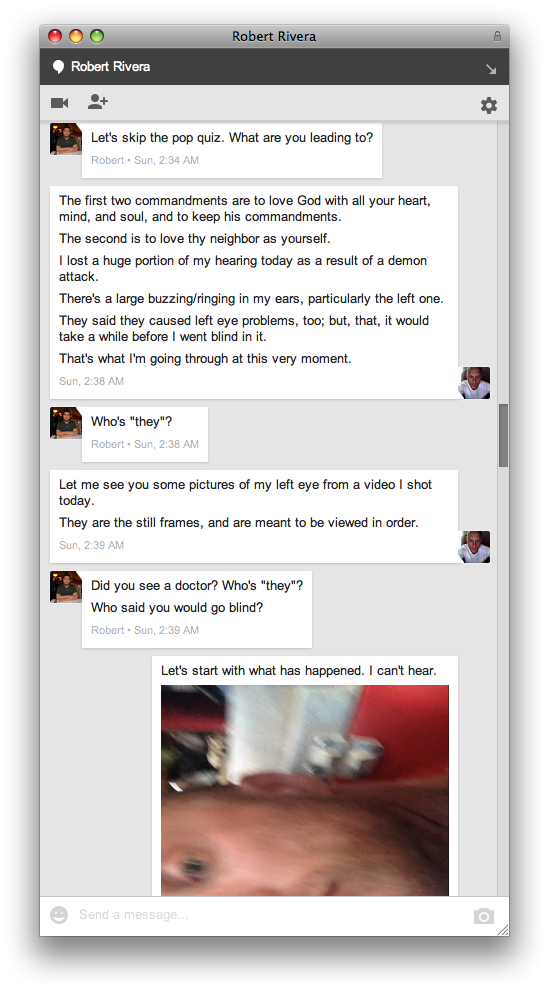 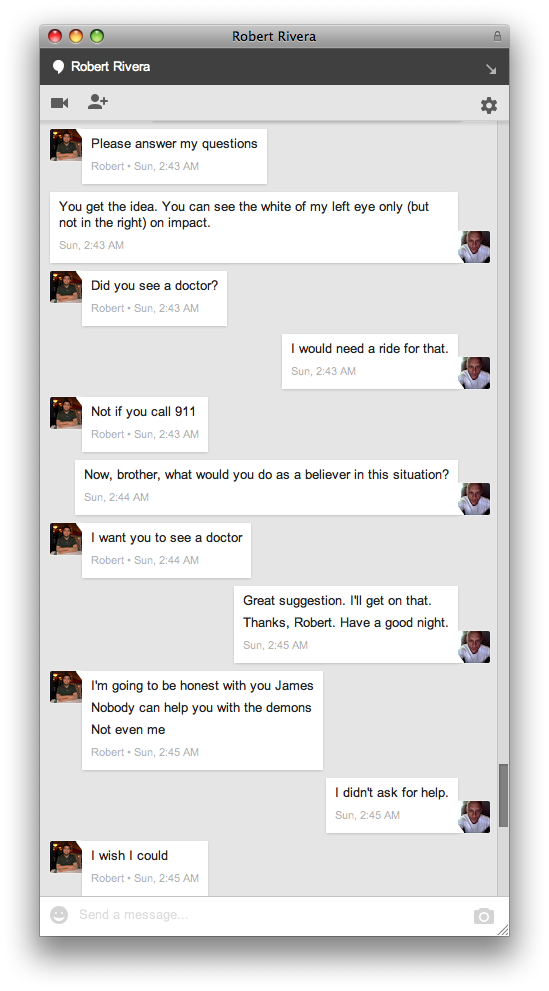 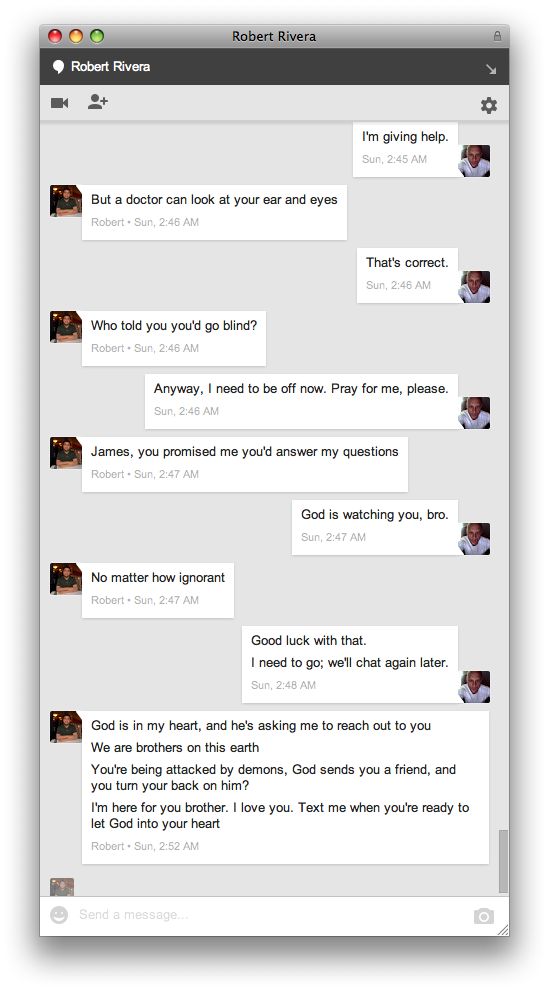 I omitted the series of body stabbing and slicing pics in the series of screen captures above; however, you can see one of them in Scores of demons reside in the Jungle Homeless Encampment.

The rest of the conversation is presented here. Notice the time of day God decided to send him to me as a blessing (after 2 a.m.).

A follow-up conversation with a "Christian brother"
On June 26th, 2014, I decided to give the reader above chance to be confused with a Christian, instead of the mocker I suspect him to be. I took the bait at every turn (lying about being on drugs, even, in order to put his claim of fellowship with God to the ultimate test). As you'll see from the conversation, his own concerns came before Christ's, as I was clearly in danger, needed help, and yet couldn't get what I needed until I completely denigrated myself to him.

This is the opposite of how a true Christian would act in real life; if you're not a Christian, then you may miss the point of this conversation, just as the reader did. Still, I'll risk it; it's at least interesting, if not educational and extremely telling: 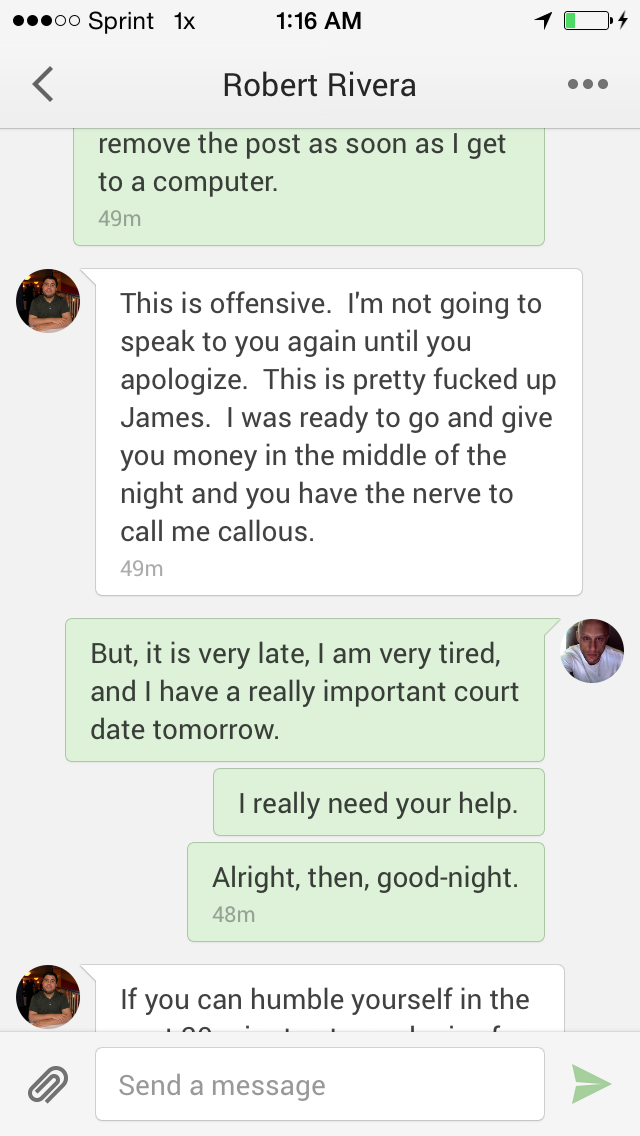 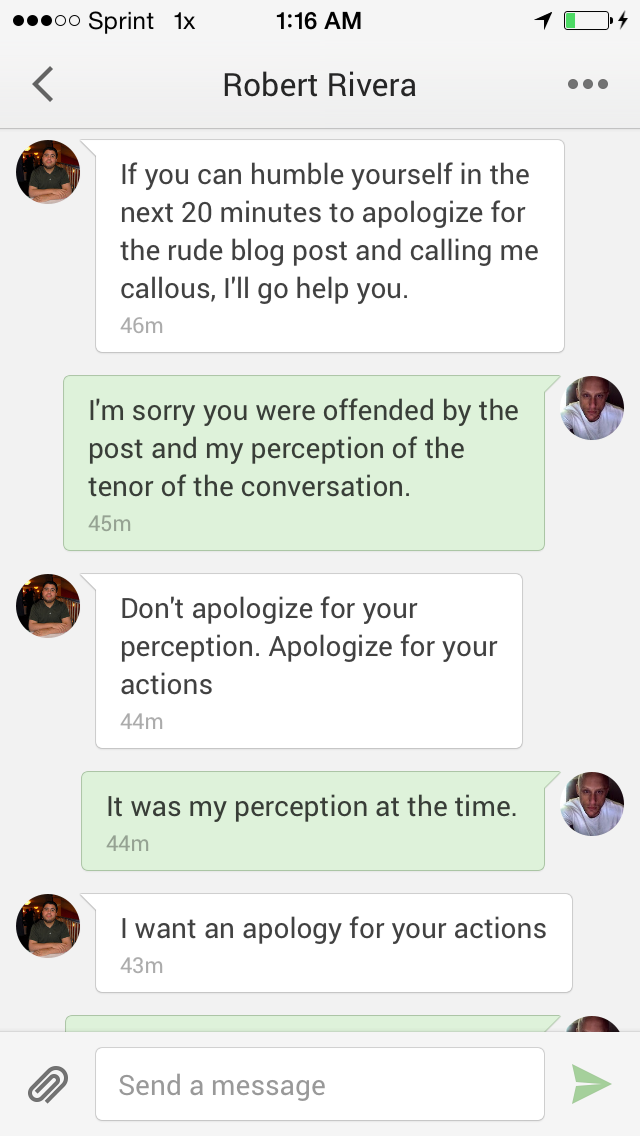 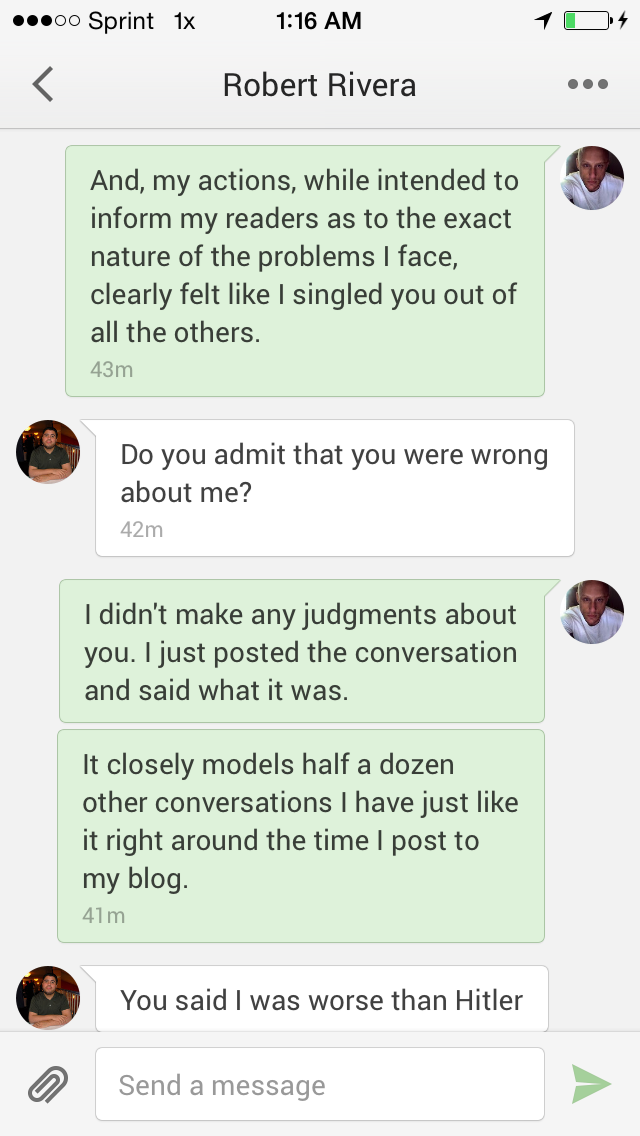 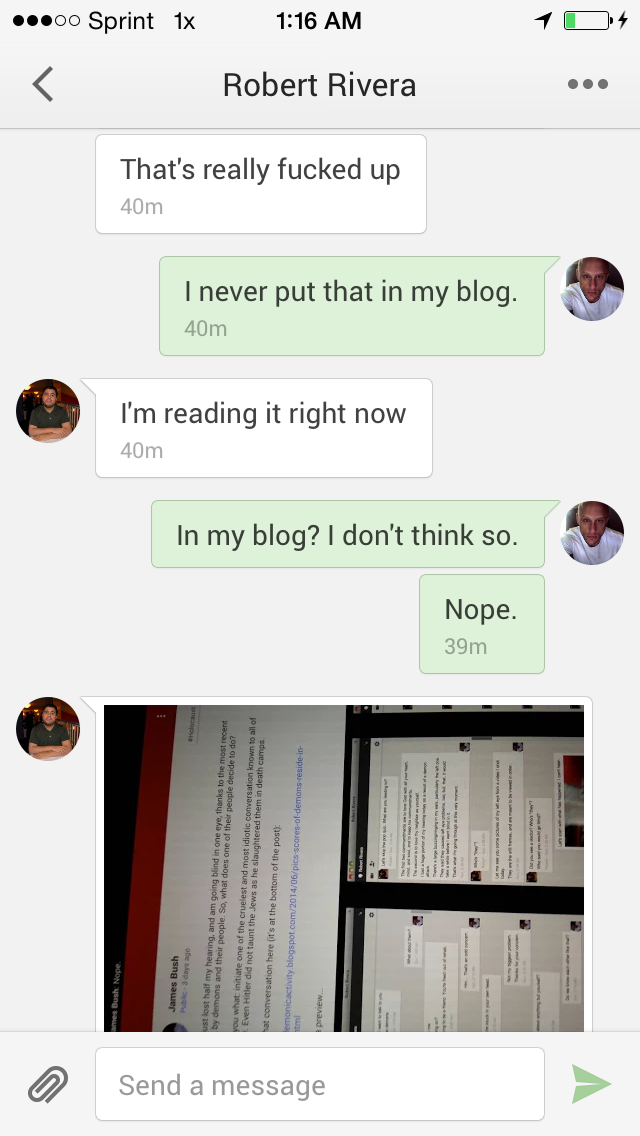 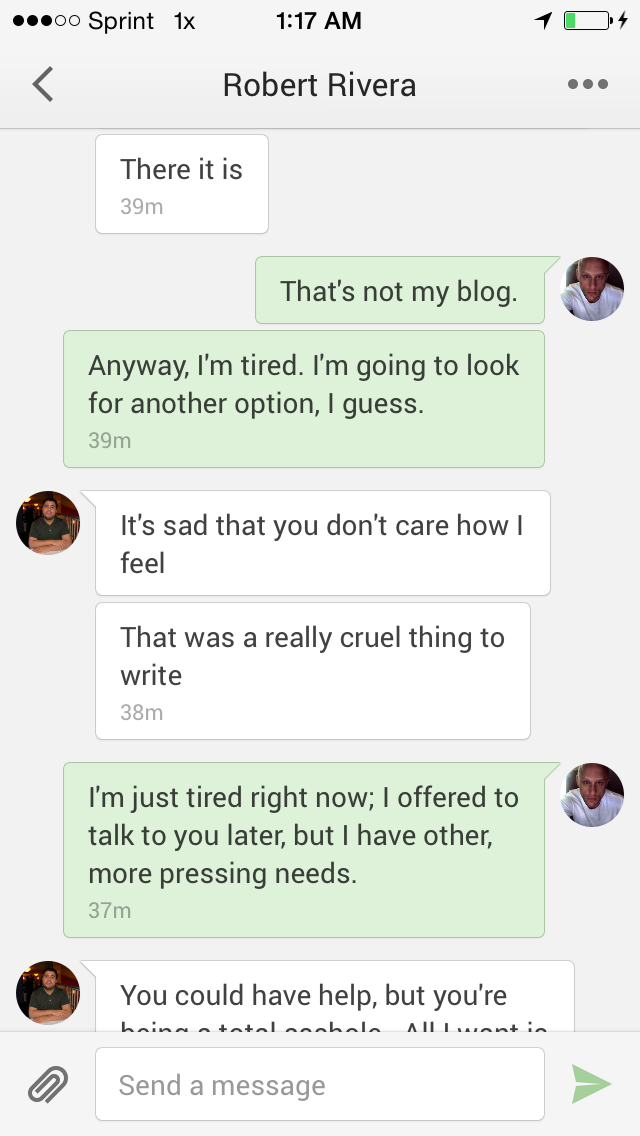 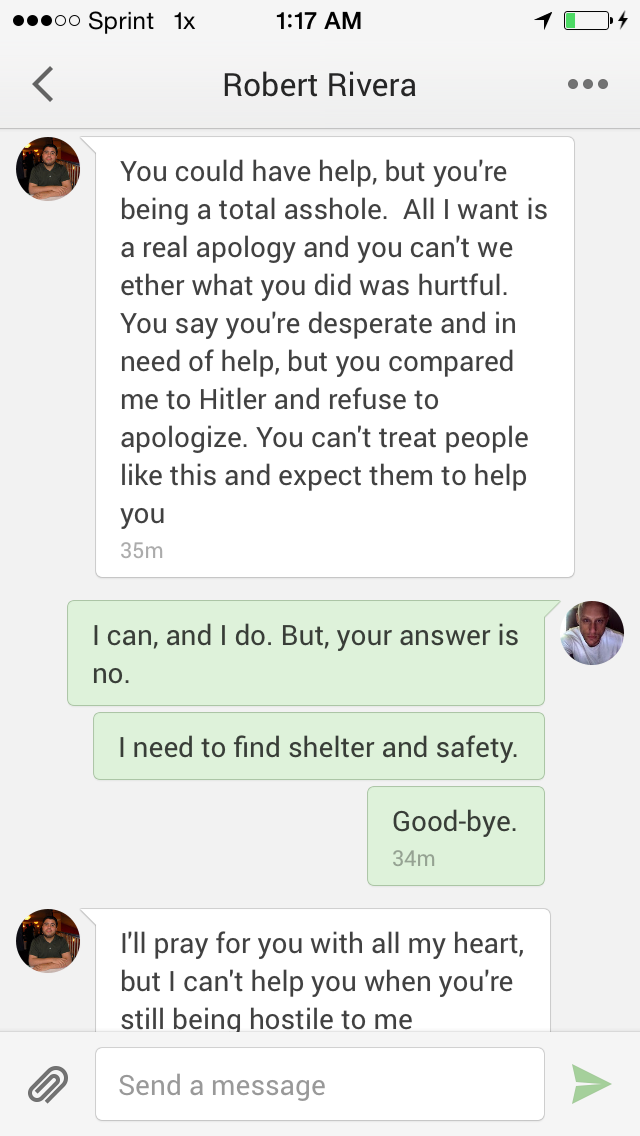 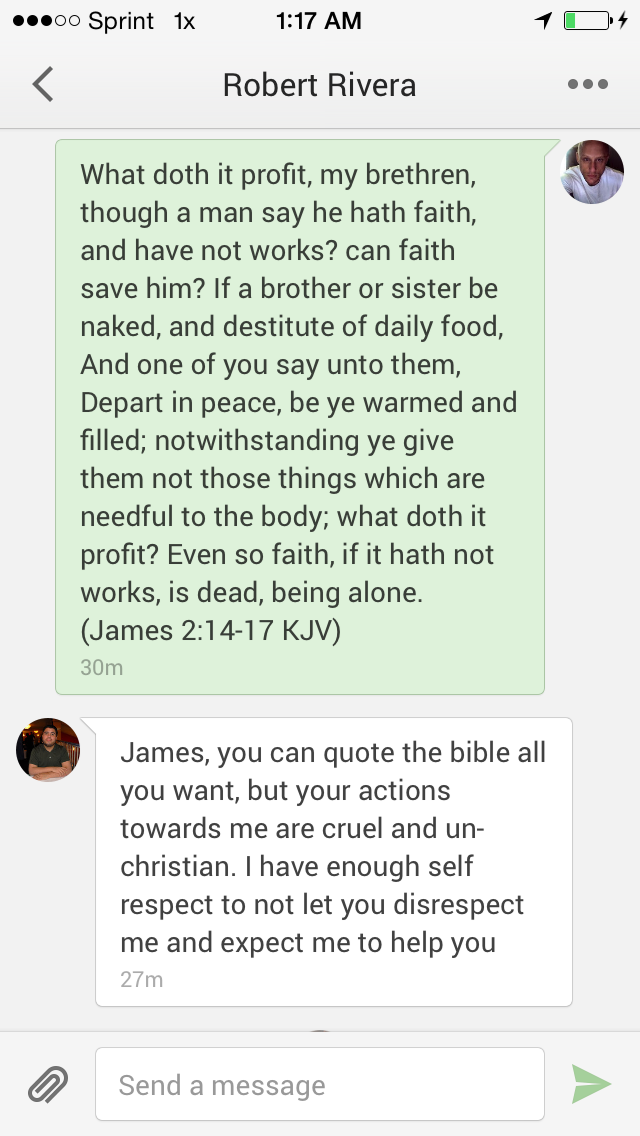 So, my point was, was that he had an opportunity to be Christ-like in the literal sense, and in every sense. He didn't notice. He simply wanted to fulfill his agenda for the "in-crowd." (demon vernacular)

Grandma threatens to cut imaginary funds over 'meth' conversation (above)
So, today (July 1st, 2014), I get an e-mail from my grandmother saying that she saw that I was on meth again. Wow. I'll just share the e-mail, and let people think what they think. Simply put, there's those in the know, and then there's the idiots. You're either one or the other:
This e-mail (unbelievably) implies that I solicit money from her from time-to-time. Never, ever happens. In fact, I was just feeling guilty the other day about not calling her and the rest of the family enough to let them know what's going on. The timing and content of this e-mail is just so suspicious...

I can't blame them.


NOTE | Some readers would ask, "Why humiliate yourself and others by putting their (and your) shame out there for others to see?" Because this is about a problem bigger than myself and others. Just as fear is no factor for me, neither is humiliation; the work must go on, regardless. By putting this stuff out there, I have encouraged others to come forward with their demon problem, who also experience the same kind of ridicule that was holding them back from sharing.

Demon peoples' anger rages on
What can I say? They are genuinely pissed about getting caught red-handed on video doing the slimey things they do. 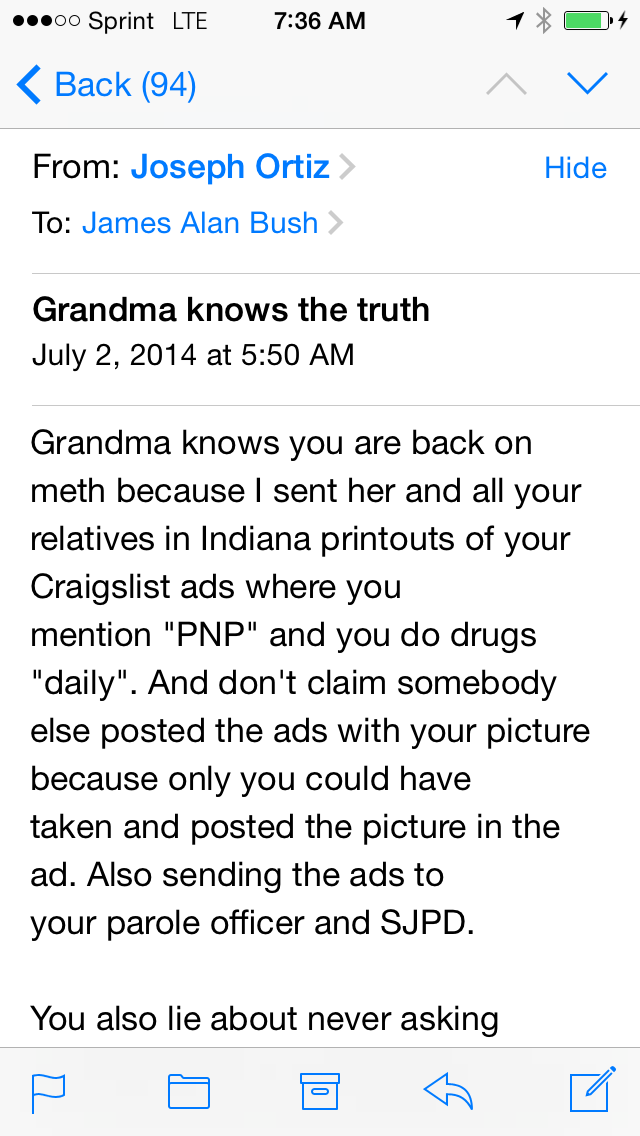 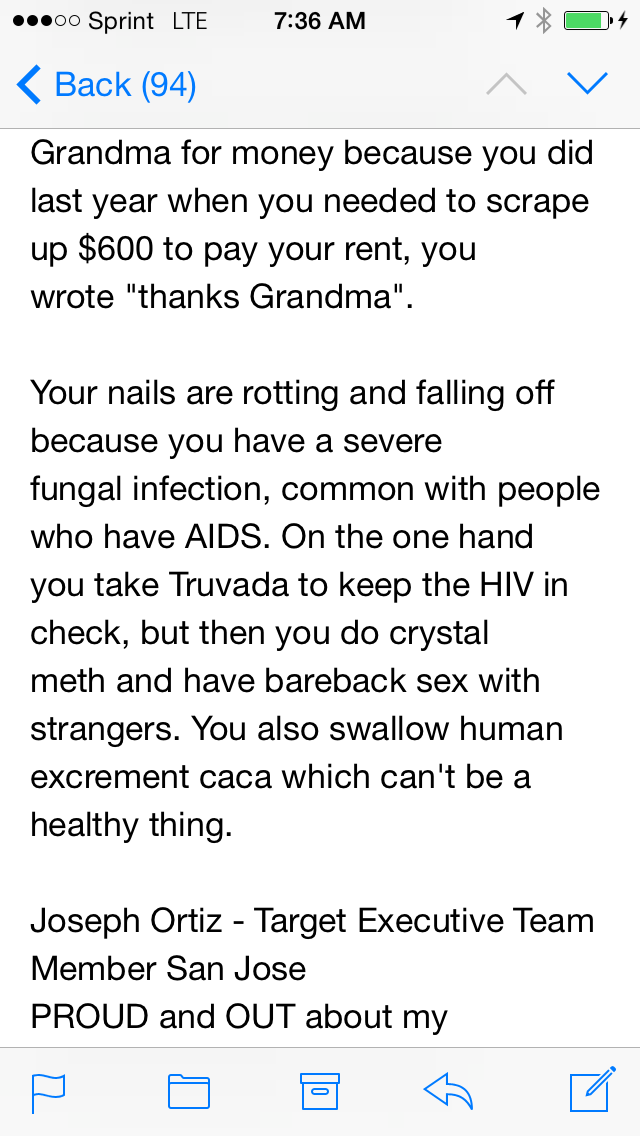 Grandma says nothing from stalker received on her end
I asked grandma about this e-mail; she denies receiving any mail like that described by the stalker above: 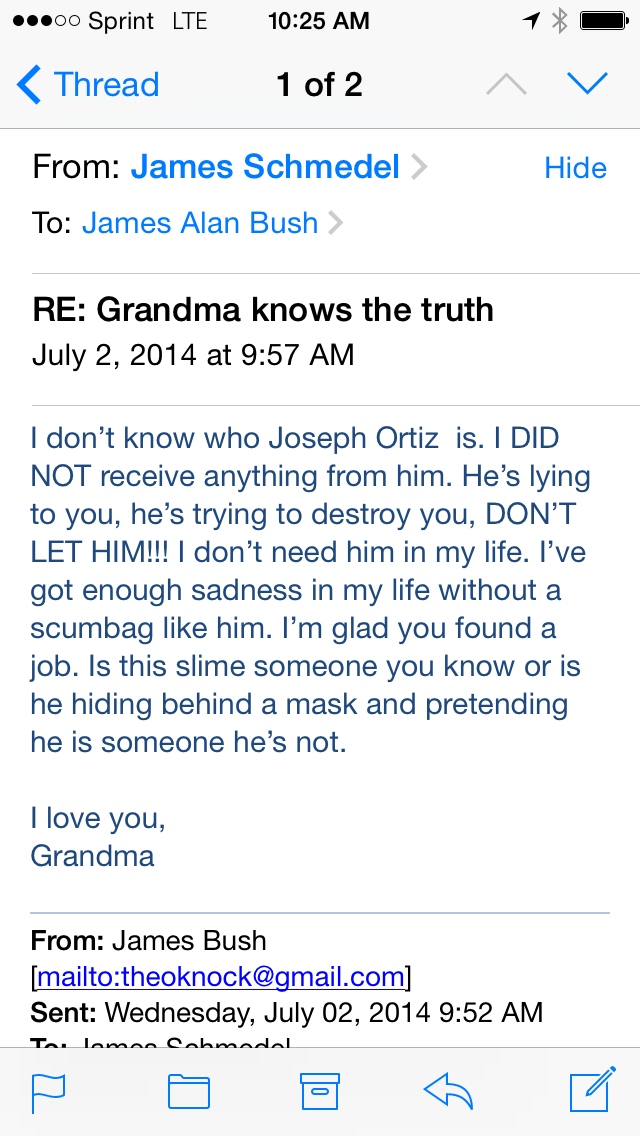 I wondered, though, because the stalker has been sending mail to every place I have lived in California for the past several years now (since the blog was first started, actually).

Facebook reader weighs in on stalker's free time
Long-time reader, Elizabeth Meiser, who was first introduced in READER | Michigan woman pens letter to jail, advises abstention from drugs, sex, wrote this in response to my stalker's latest series of e-mails: 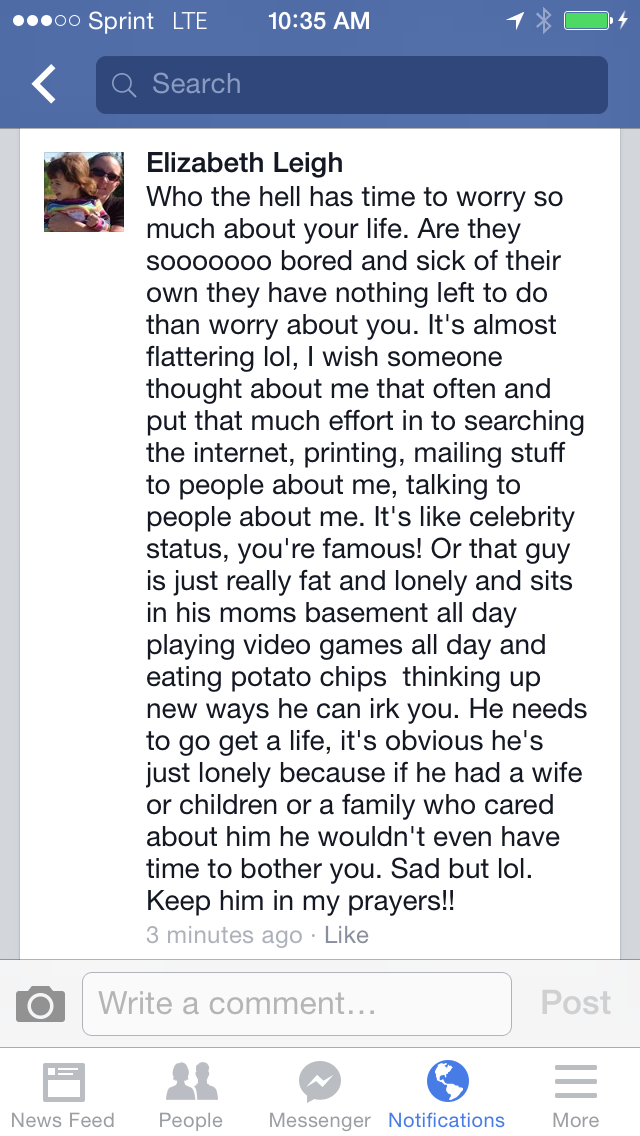 The Voices Demons expressed a similar sentiment, but in characteristically muted fashion: "I think he's trying to say you're not being ignored."
By James Alan Bush at 6/26/2014 09:39:00 AM No comments: