#492 - VIDEO | Another illusion of Scratchen's eyes appears inside new apartment

A video made last night suggests that the illusion of Scratchen's eyes appeared out of nowhere, glowing, and in the dark: 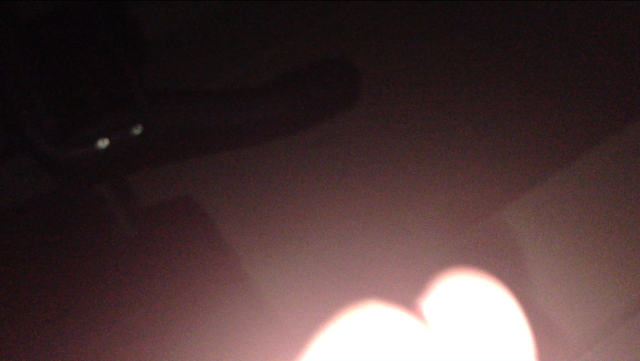 The video from which the above still frame was taken was made at my apartment, where lots of demons decided to shack up for the night.

Like the two other videos already posted to this blog showing this same illusion, Scratchen's eyes in this new video were also formed by objects made blurry by a camera in motion, specifically, two bolts on the side of a desk chair:

NOTE | In one past video, the eyes were actually buttons on a shirt hanging in a closet; the other, light-and-shadow play on a power strip, as well as opportune camera angle.

I didn't notice the eyes until I reviewed the video a second time (when I usually skim frame-by-frame), nor did I see them with my own eyes at the time. Also, there does not appear to be any bolts in the side of this chair at this time.

My phone probably changed hands a number of times between the first review and the second (as it constantly does during out-of-control demonic activity), so perhaps the eyes were added(?) by someone else who had it; but, even if they aren't the real thing, they look exactly as I've seen them before.

For example, late one night last year, when Scratchen was still living with me at my apartment on Julian Street, she ran suddenly and unexpectedly out the front door as soon as I opened it, and then hid in the jungle of a garden outside (pictured, below):
I spent the next two hours chasing illusions of her eyeballs, just like the ones shown above, before I found her. Her eyes appeared everywhere among the plants and trees, sometimes dozens at a time. Whenever I saw a pair, I would run up to them, only to have them fade into nothing as I reached down to pick her up.

There are two other videos showing Scratchen's eyes, both of which are shown in VIDEO | Scratchen's life threatened again by repeat of eye illusion.
By James Alan Bush at 1/21/2013 09:57:00 AM 3 comments: