This is a technology post that answers the most frequent questions posed by paranormal investigators and researchers pertaining to image-mapping cloaked (semi-invisible) demons in the dark in digital media [see TECHNOLOGY | Automating mapping of demons hidden in digital media] (the important questions, as posed and answered by me, follow, which supplement the instructions contained in the aforementioned post).

It is intended to serve a very underserved profession [see Paranormal investigators ill-equipped for demonic possessions] and to inform (strangely) somewhat uninformed professionals [see California paranormal societies, groups, investigators and ghost hunters asked to weigh in on demonic activity] among them, who I believe are the most entitled to both as willing and able full-time devotees to document the world's number one problem—the demonic plague; the information and instructions themselves are intended to validate and justify their chosen profession for their audience and customers.

The questions were compiled from the responses to an e-mail sent to hundreds of paranormal agencies, world-wide. To-wit:


I've adapted a way of mapping hidden demonic (and other) entities in digital media, basically allowing you to detect such entities which were otherwise invisible, and thereafter making them visible. This may be helpful to you, in that past footage you've discarded as worthless may contain a treasure trove of image data that you missed.

This post to my blog tells you how I can help you discover such things:

It contains examples of hidden demons in digital media, and describes (and shows) various processes for discovering them by image-mapping. You won’t be able to dispute the reality of their presence nor the effectiveness of my process for revealing them.

If you'd like a demonstration using your own media, I'd be happy to take any digital video you've made—especially, video made in the dark—and process it for you. Since I’ve automated that process, it takes virtually no time and no effort at all to uncover anything that might have been lurking in such footage, unseen.

Take a look at that post very carefully, and get back to me when you can; I’ll be glad to help you revitalize your business, and legitimize it at the same time. I have a sneaking suspicion that you have more data than you know.

Some paranormal researchers responded positively, some with well-disguised skepticism:

Now, on to the questions and answers:

Technique backed by existing applied sciences
Q: How did you develop a way to detect hidden demons in digital media?

A: I didn't develop a way, I adapted the way astronomers process image data from space satellites to finding hidden demons in digital images. The scientific theory, tools and processes to find hidden nebular and the like are the same, and are best explained in How to stretch the histogram using levels and curves at Astropixels.com.

Choosing the right kind of footage for image-map processing
Q: Which photos and videos in my archives are most likely to contain hidden demonic (and other) entities?

A. Those made by a digital camera, in the dark, where and when demonic (or other) entities were likely present—but not seen with the naked eye or in any digital image—at the time they were made, ideally, in RAW Image Format, if possible/when applicable.

Processing the wrong kind of footage
Q: Is there a way to uncover cloaked demons in images made in bright and/or natural light?

A: The blue-channel image-mapping technique introduced on this blog is not the only way to reveal cloaked entities in digital images, not even for those made under ideal conditions; however, applying it to images made in bright and/or natural light will not work.

For those, you can use an image-differentiation technique common to X-ray dentistry, by which dentists can track the progression of a dental disease using image-processing software to compare the visual difference between an X-ray made at its onset (or upon discovery) and any X-ray made subsequent.

To quickly and easily make vivid the otherwise subtle appearance of semi-transparent apparitions and cloaked demons—just to see if they are there—open a photo or sample video frame in Photoshop or GIMP, screen the blue channel with an equalized copy, and then compare the equalized difference using the inverted results and the original; disable and enable the screen copy of the blue channel to alternate the shadows and highlights. 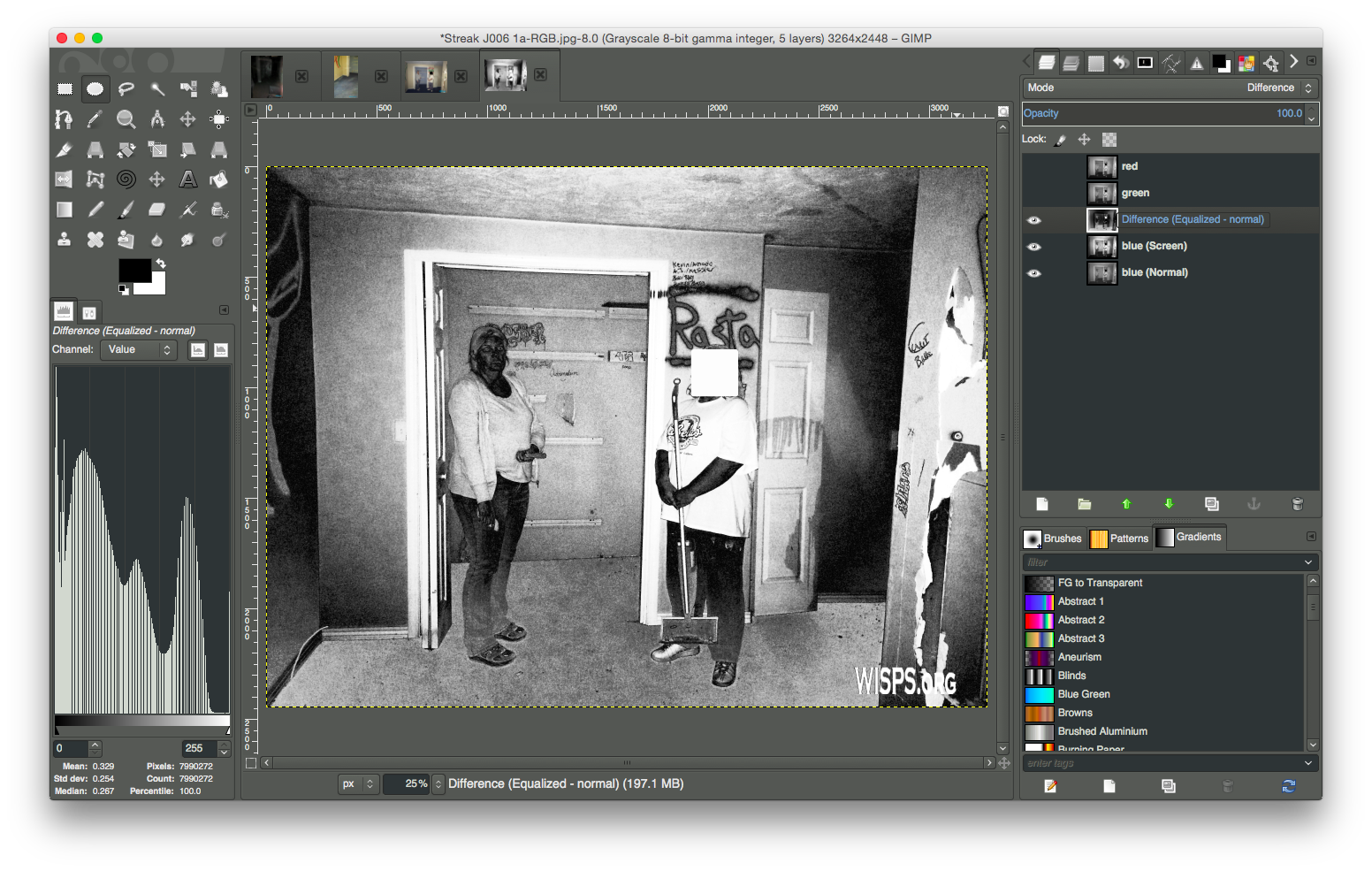 Blue is the most likely channel containing image data impressed on a digital image sensor by a demon's cloak [see Enhancing demon faces made anywhere, at anytime, from anything]; however, red is a close second [see TECHNOLOGY | Highlighting demons possessing a human as shown on video, and green a third [see Photoshop action for revealing demons in the dark (or not); see also TECHNOLOGY | Capturing and revealing hard-to-see sucker demons in a digital photo].

Gary Carter, Wasatch Investigative Society for Paranormal Studies, who estimates that 90% of his caseload involves demonic activity, sent three images to be evaluated, two of which "I know have demons in them," he said. Applying the aforementioned quick-search method, wisps—as he calls them—were found in all three images, and made a sure-fire case for reclassifying wisps as sucker demons (a very serious problem), underscoring the importance of and need for post-processing digital media using scientific image-mapping techniques:

In the image of above, the wisp in front of the chair reveals a sucker demon similar to the one shown flying into my home from the entry hall in VIDEO | Sucker demons launched into home by demons, their people:

The aforedescribed method worked for the other two images, as well, by uncovering wisps in each, especially, the following:
The image on the left demonstrates the need for a image-mapping technique suited for bright-light images very effectively, in that the wisps hovering over the blue-tinted flooring look like streaks in the original, and may have been construed as such were they not so easily identifiable as wisps in the composite of differentiated images, as shown on the right.

Entities overlapping shadow and light. While the technique used in the image above made the wisps easily distinguishable from floor streaks and walls, had those wisps overlapped a shadow area, they might have been missed. In such cases, a second differentiation composite that alternates light and shadow will uncover any entities spanning the border between a light and shadow area in an image:
Generating the reverse-differentiation composite is simple: just disable the screen layer, and light and shadow are instantly flipped (shown above, below):
About my combined experience, exposure to problem, opportunity
Q: What skills and experience qualify you for this type of work?
One researcher-investigator
A: asdf:


Imaging science is new to me, although old-hat to most professional and amateur astronomers; I never made a connection between the two until I was looking for new ways to enhance demon-in-the-dark images, and read how satellite-telescope images were processed to find "hidden" galaxies.

The same concepts are used here.

So, there are decades of research and practice behind imaging science; and, there are 16 years of professional employment as, in part, a graphics designer. I am also an Adobe-Certified Expert in both Photoshop and Illustrator.

I've been making videos of demons ever since I first captured the Spectre of Death flying into my apartment—late at night, while I slept—by mounting my cellphone next to my bed; that was in October 2011, if I recall.

Since that time, I have consistently put in full-time weeks documenting demonic activity (the blog is three years old now); and, am now in a position to develop ways of detecting demonic cloaks, demonic-weapons fire, and the presence of both (demons and their weapons, that is).

What's hella cool about all this is that it's the world's biggest problem, and (for some reason), I am able to give live demonstrations on-demand, which enables me to prove the efficacy of my solutions.

Of course, if you are already encountering demons on you end—like you said—you can try these things out yourself.

If you don't want to mess with complicated scripts and the like, but want to see whether the core of the process is sound, simply screen the blue channel in any RGB digital media footage made where demons were, and you'll be able to make out whether you have something quite easily.

If you need instructions for doing that, I will provide them. I am motivated to find those willing and able (provisioned) to document demonic activity as thoroughly as I have. (People will be shocked by the answers they find to questions they never thought to ask—that's all I'll say for now.)

Also, keep an eye on my blog; I'll be posting frequently-asked questions by other paranormal researchers, which you'll find interesting; it'll include yours.

By the way, if there's a lot of demonic activity in your area, and you don't mind late nights and early mornings, by yourself, in the dark, you stand a good chance of revitalizing and legitimizing your trade.

Lemme know what I can do to help; I'm at your disposal.

About my experience advantaging opportunity, exposure

Q: Can you demonstrate that scientific-imaging principles are applicable/transferable to mapping hidden demonic (and other) entities in digital media?


Yes, I do. In the post, there are before and after screenshots, plus a video clip that was processed with the script, all showing positive results.

The way you phrased your question concerns me that you are misinterpreting what I'm offering. So, make sure you understand what this is about: it's almost identical to scientific imaging of astronomical data acquired by telescope. Things that can't be seen by the naked eye, but are picked up nonetheless by CCD sensors, are simply brought into visibility in image-editing software.

It's hardly revolutionary; it's done everyday, by everyday people. In my post, I'm merely pointing out a fact about demonic entities and digital cameras (i.e., the fact that demonic entities that can't be seen by the naked eye still leave a footprint in digital images that can be made visible in image-editing software); there is no invention here or anything like that. I wrote a script that makes it fairly easy to get started detecting demons you did not see, but were there, and, accordingly, left their mark on the digital camera's sensor, but that's hardly anything to get excited about—unless you just have tons and tons of video footage that you want to scan for demonic entities.

In fact, the process is so simple to do manually that a script would be overkill we're not for the number of images that need to be processed in a video (30 frames per second comes out to 30 images to be processed – my script does all 30 for you, whereas, manually, you would have to do the process 30 times yourself. So, the only benefit to the script is batch processing of video frames—again, nothing revolutionary at all.)

Applicability to ghost hunters
Q: Can the imaging-science techniques you applied to the process of mapping hidden demons in digital media be used to find ghosts in same?


You bet. And, checking it out is really easy. Just upload some video you want processed somewhere where I can get to it (I can provide you online storage space, if need be), and I’ll get to work on it right away.

Doing so not only helps you, but helps me, too, as I am actively working on a sure-fire way to spot demons (and the like) in video using just an iPhone (for example), and I know I’m really close to doing that.


As many test samples as I can get speeds things up all the more...