The Life of a Demoniac: Selected Posts (Preview) now available on iTunes/iBooks Stores

I am in the process of publishing selected posts to ePub format for all the reasons why an iBook is better than a blog; specifically, video playback quality: 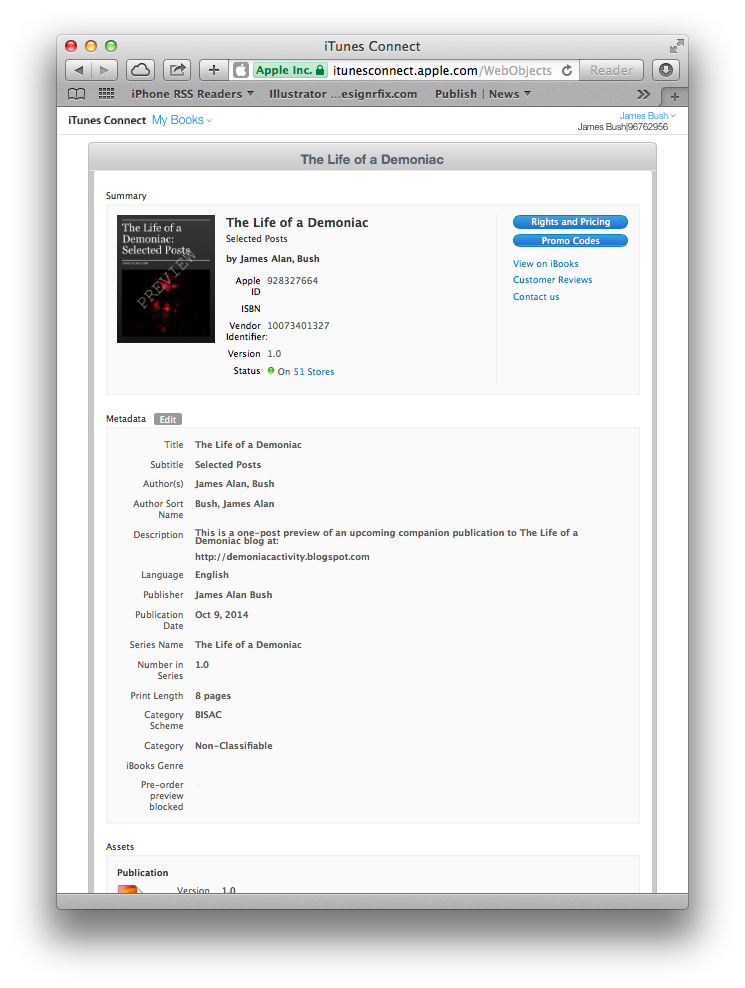 The blog is written around videos (and photos, I guess)—the writing itself being secondary—but, due to their large size and the inability to force HD quality playback, much of the significance of each piece of media is lost. Most people aren't watching the videos because they are too large, or are watching them at low-quality playback rates, thereby missing the good stuff.

Hence, the iBook, a preview of which is now available for download on iTunes: 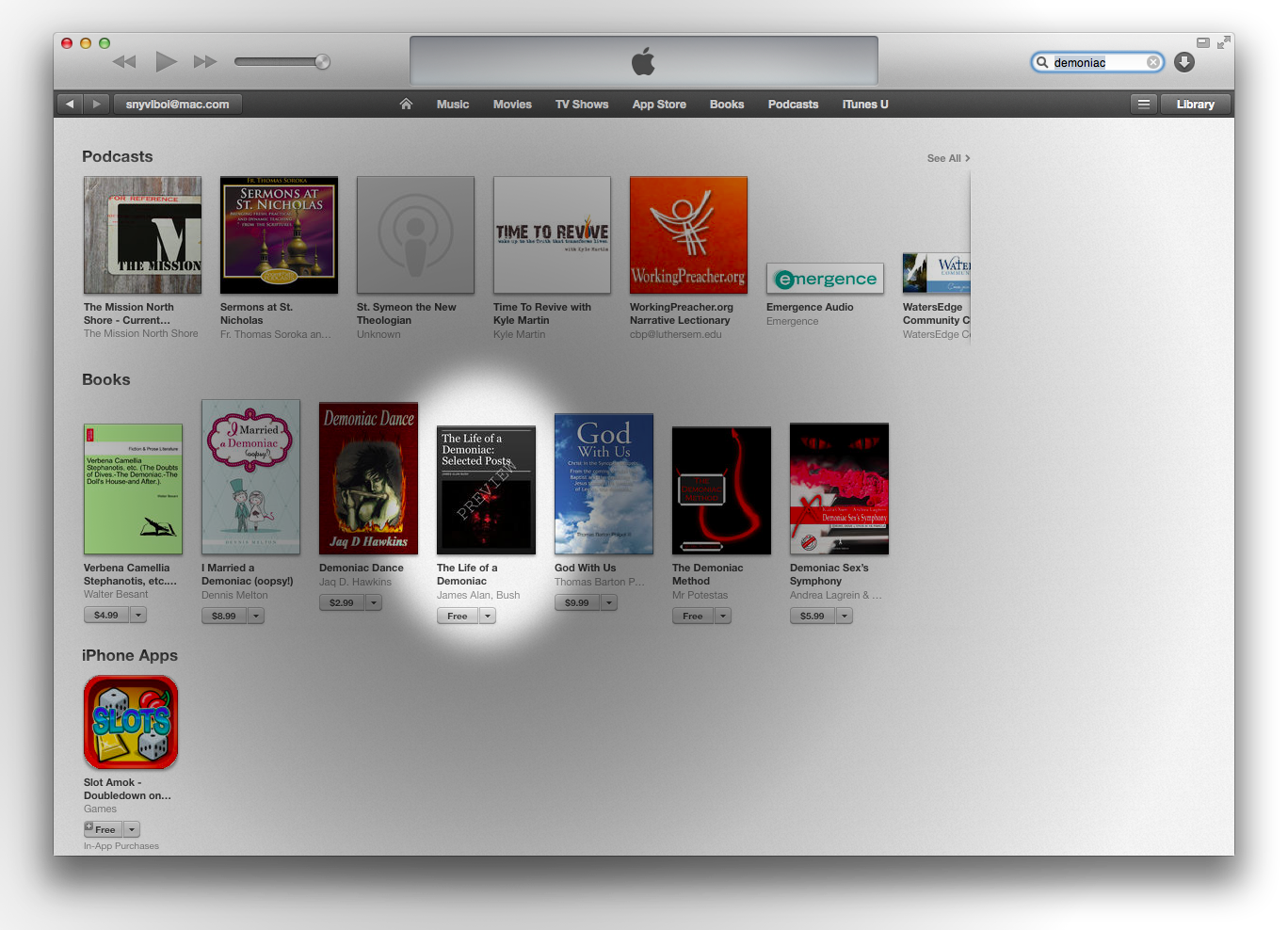 The book is also available from iBooks Store: 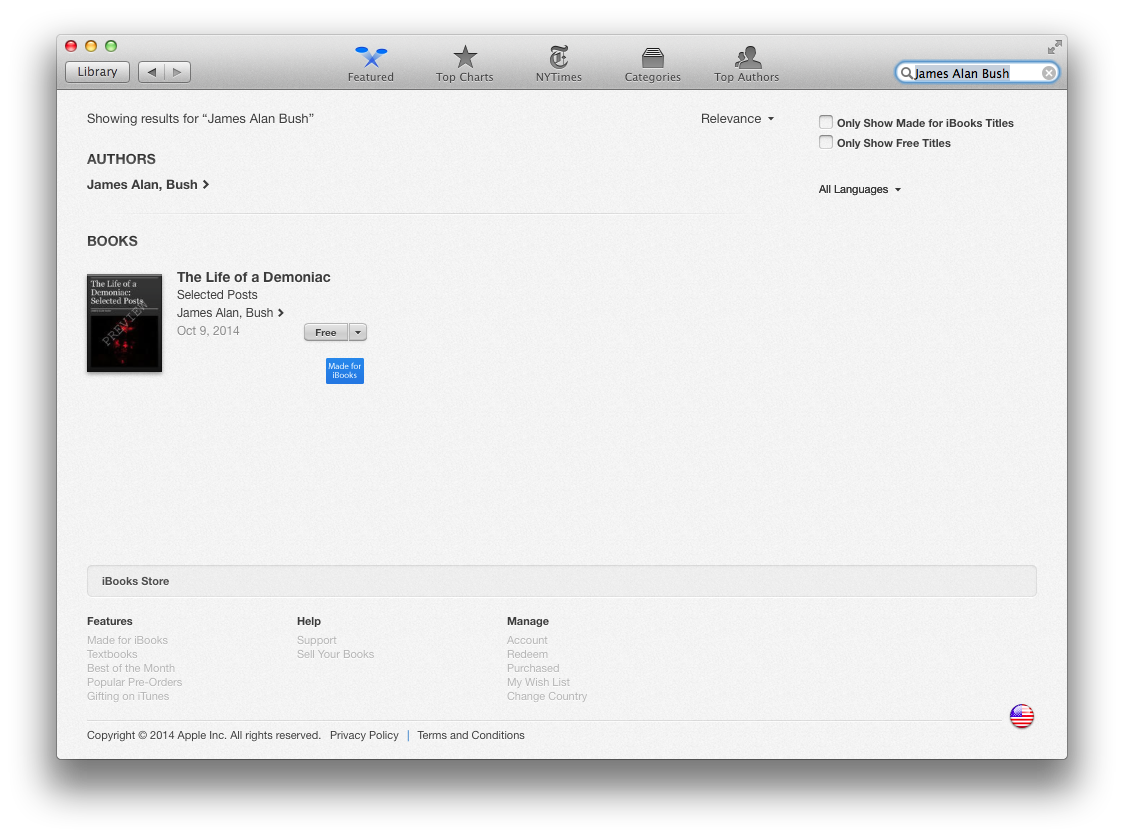 
I dedicate this publication to God, and, of course, Jesus Christ.

To God, for answering my oft-repeated prayer: “Please help me take a bite out of evil today.” [Psalm 140] He answered that prayer every time I prayed it; the number of posts and the date they were published coincide with how often and when each prayer was answered. The posts themselves show the results [Proverbs 15:29].

NOTE | This dedication also serves as gratitude for a life of constant sorrow and torment, in that it always results in godly wisdom [Ecclesiastes 7:3-13].

Some may ask: isn't that a little trite, being about God and all, while suffering a problem like this? To them, I would say this: my fight is against evil, whether I like it or not—and I just happen to like it, by the way; but, that's neither here nor there. This is:

Jesus came to draw two lines in the sand between good and evil. One line declared war on evil (not just bad behavior, but the same "kingdom" you see on this blog):


And I tell you, you are Peter [Greek, Petros –a large piece of rock], and on this rock [Greek, petra –a huge rock like Gibraltar] I will build My church, and the gates of Hades (the powers of the infernal region) shall not overpower it [or be strong to its detriment or hold out against it]. [Matthew 16:18]

With the other line, He declared himself commander-in-chief:


Then Jesus said, I came into this world for judgment [as a Separator, in order that there may be separation between those who believe on Me and those who reject Me], to make the sightless see and to make those who see become blind. [John 9:39]

Based on this, one can infer that the function of a Christian soldier is to recognize Christ's declaration of war against evil, and to be vigilant in the fight against it. Whether or not you define me as a Christian soldier notwithstanding, let me proffer this in support of my argument that I am on the Lord's side:


John said to Him, Teacher, we saw a man who does not follow along with us driving out demons in Your name, and we forbade him to do it, because he is not one of our band [of Your disciples]. But Jesus said, Do not restrain or hinder or forbid him; for no one who does a mighty work in My name will soon afterward be able to speak evil of Me. [Mark 9:38-39]

My faith in action—my Abraham-like faith, you might say—is to recognize that declaration of war, and pledge allegiance to the commander-in-chief, regardless of the cost.


Now the Lord had said unto Abram, Get thee out of thy country, and from thy kindred, and from thy father's house, unto a land that I will shew thee: And I will make of thee a great nation, and I will bless thee, and make thy name great; and thou shalt be a blessing: And I will bless them that bless thee, and curse him that curseth thee:and in thee shall all families of the earth be blessed. So Abram departed, as the Lord had spoken unto him; and Lot went with him:and Abram was seventy and five years old when he departed out of Haran. And Abram took Sarai his wife, and Lot his brother's son, and all their substance that they had gathered, and the souls that they had gotten in Haran; and they went forth to go into the land of Canaan; and into the land of Canaan they came.

And Abram passed through the land unto the place of Sichem, unto the plain of Moreh. And the Canaanite was then in the land. And the Lord appeared unto Abram, and said, Unto thy seed will I give this land:and there builded he an altar unto the Lord, who appeared unto him.

This is Abram’s faith: He trusted that God would deliver. He paid gratitude to God, even before God did anything more than relocate him with what would seem like nothing more than a bunch of promises to anyone else.

Have you ever felt God at work in your life during a period of upheaval, and just couldn’t get upset at the upheaval like you might have otherwise? You have God to thank for that, because it means He’s been at work in your life in so many ways, and so often, that you’ve come to trust Him, even when things look really bleak.


Abraham believed God, and it was imputed unto him for righteousness:and he was called the Friend of God.

That kind of insurance comes from reading your Bible daily [Romans 10:17] and by unceasing prayer [1 Thessalonians 5:17]. But, remember, though: insurance doesn't prevent disaster, it just helps you through it.

Why just a preview?
It takes a lot of time to move posts over to an iBook, in that the transition from the scrolling page layout of this blog to a fixed page layout of an iBook is not an easy one. Just the one post in the preview iBook took over two days to get just right, and I'm still not completely satisfied with it: 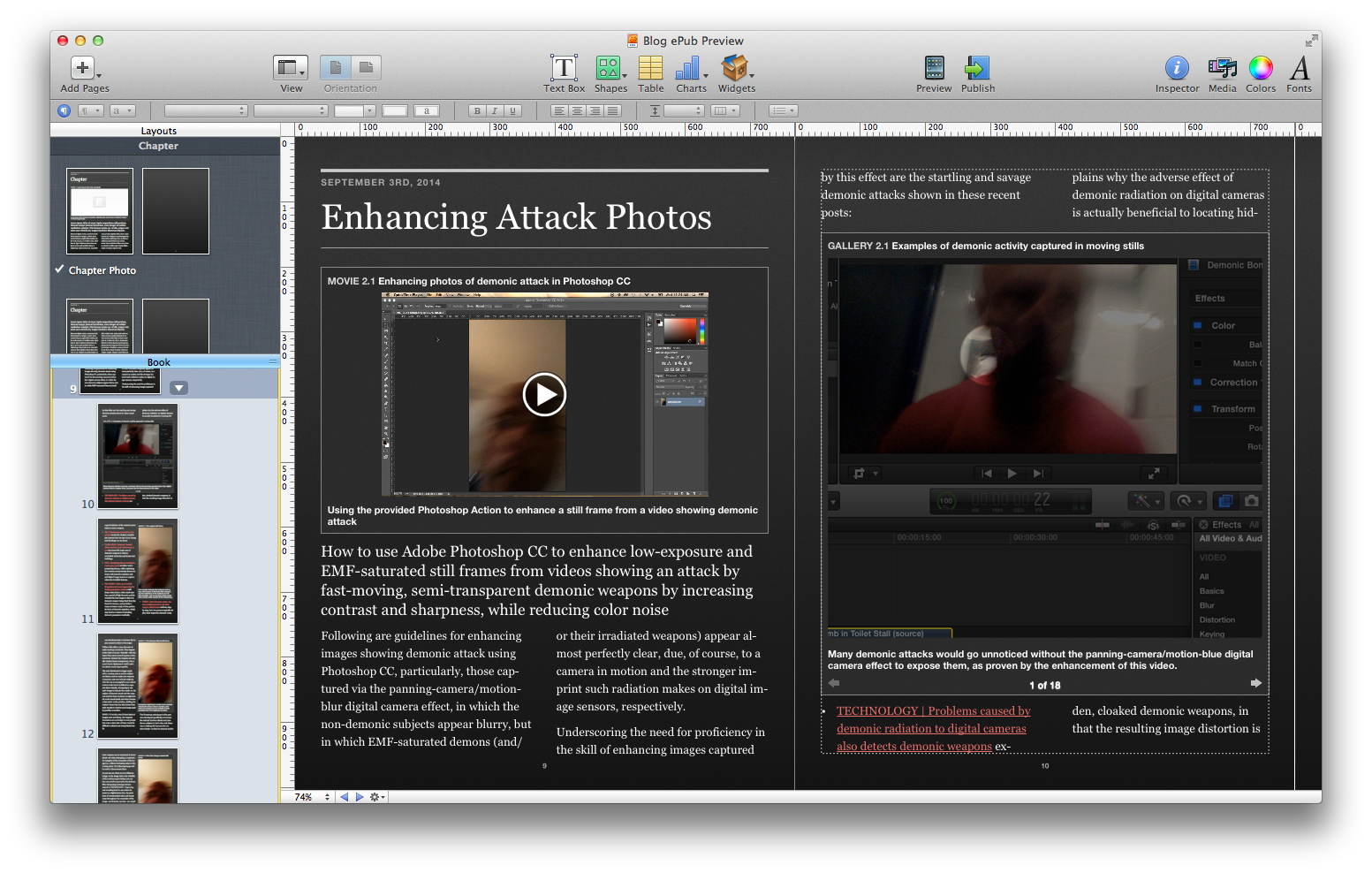 Not only is the change in layout formats a challenge, but, with the iBook, there are more presentation options—and, therefore, more decisions to make.
By James Alan Bush at 10/11/2014 11:07:00 AM No comments: Links to this post