Psalm 140 sums up most earnest prayer

Psalm 140—it helps to know someone else has been through my situation and was able to write poetry about it later. And, it really helps to know God takes these kinds of problems seriously.

My most earnest prayers mirror this completely, and it asks for everything—everything—I need right now:

Keep me, O Lord, from the hands of the wicked;
Preserve me from violent men
Who have proposed to trip up my feet. The proud have hidden a trap for, and cords;
They have spread a net by the wayside;
They have set snares for me.

I said to the Lord, "You are my God;
Give ear, O Lord, to the voice of my supplications.
O God the lOrd, the strength of my salvation,
You have covered my head in the day of battle.
Do not grant, O Lord, the desires of the wicked;
Do not promote his evil device, that they not be exalted.

Annotations
4,5Humans collaborating with demons, who have been violent, as well, are planning even more violence, and have otherwise made my demise their goal (hear the gang-stalkers' mandate, "We prolong peoples' inevitable demise," in Gang-stalkers warned of upcoming violence, death).

6I feel the need to explicity state to God that my allegiances lie with him—and not to Satan. On a daily basis, that means being cognizant of where the devil is at work in my life and the lives of others, and what work I am doing that it asked of by God. Of course, as is the case in this Psalms, I indicate to God that he is my God by asking Him to provide for my needs.

7My head could use some more covering (read Skull disfigured in just two days by demons); but, let me assure you that things could be way worse, as the limit of what these demons and their human collaborators can do has not been reached. They are adept at medical science, and they use their ability to enter the body without leaving a trace on the skin to full effect.

8The Voices Demons desire acceptance within the community of the Bay Area, and seek this by first attempting to gain validation for what they do, i.e., torture. They devised a way to gain at least complicity and/or participation of people by portraying their victims as persons deserving of their well-honed craft that is mental and physical torture. This has several advantages for them, such as isolating their victim from society in order to better control the victim's external and internal perceptions; but, as to their goal of integration, it's just another technique of torture intended to cause mental and emotional harm to the victim, and to expand their arsenal of weapons in their torture war chest via the means by which a human can harm another. Why would I ask God then for help with this, when working with demons is clearly a choice that He allows humans to make? The reason is simple: many people do not understand what it is they are working with. The Voices Demons, for example, are always the first to introduce themselves to a new person because they can't be seen. Invisibility allows them to say that they are whoever they are good enough to pretend to be, such as an angel. Since they can read minds, they know what a given individual's idea of an angel would be, and can meet those expectations handily. Some people in San Jose think they are doing good by being bad to "bad" people.

9Slander is a common tactic with gang-stalkers, a group of demon-led criminals, who target selected individuals as part of the demons' effort to cull society. I pray not for protection against the fallout from slander—that's what keeps this problem alive, and a solution possible—rather, I pray that those who are being lied to do not commit acts for which someday they will feel guilt or remorse.
By James Alan Bush at 4/20/2012 02:31:00 PM No comments: Links to this post

My new apartment, which is about half full of demons as compared to the old one, albeit with new faces, is located at 3311 Princeton Way #5, in Santa Clara.

The star on the map below happens to point to the exact location of my bedroom, believe it or not:
This apartment found me, in that the very hour of the very day I needed it, my phone rang in response to a roommate ad I placed two months ago. That sounds lucky, unless you factor in all the demonic activity, as well as the fact that I received no calls at all in response to my roommate ad in the two months it was posted.
This apartment is a temporary landing space until I can find a less demon-infested location, if possible (as it turns out, Satan apparently can roam anywhere [Job 1:7]). Like my old apartment, this one is plagued by demons, too.

Most of these demons new to me are of the spectre variety (in other words, they look like ghosts, but are clearly demon by merit of their looks). Following is an example of what a demon spectre looks like when illuminated by the glare of a lamp:


Thankfully, these demon specters are not yet violent (Psalm 140), but seem more curious than anything. They are not friendly, and enjoy making noises from time to time. They also like to push my bedroom door open at night. And, while there are fewer of them than in my old apartment, they are much more visible. Instead of just a head mounted in the collar of my jacket hanging in the closet, you see whole bodies. Not only that, but one of them doesn't just hang onto a corner and peep around it (although all the others do). One of them actually walked from my closet into full view last night.
By James Alan Bush at 4/20/2012 02:13:00 PM No comments: Links to this post


Permission to file one of the two my small claims suits against my former landlord was granted, which one, I don't know; what I do know is that it's case number 1-12-SC-048666 per the court's case info site.

The small claims suits ask, separately, for damages from the unlawful refusal of entry (the landlord locked the gates to the apartment grounds, so I had to climb nearly eight feet high, at least three times a day, for nine days), and for relocation expenses (by state and federal law, and by city ordinance, a landlord who unlawfully poses as a landlord—which happens when you rent a building without first obtaining a certificate of occupancy from the city—you have to pay three months fair market rent, plus moving expenses to the tenant you evict).

Documents related to my eviction are posted on Scribd.com.

Want to take up demon-watching? Follow me on Google Latitude

If you want to track demonic transit or know where demons are at any given time, follow me online using Google Latitude (google.com/latitude) from your desktop or on your GPS-capable cellphone. After all, they go where I go, and most of the time, wait for me at whatever location I intend to go. 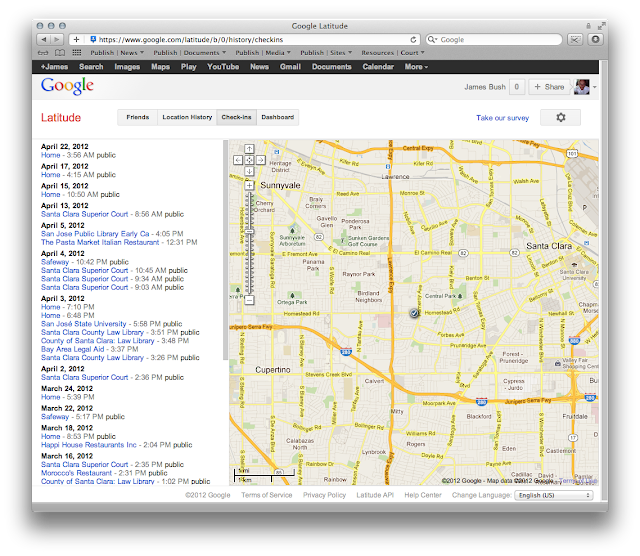 To be added to my Latitude friends list, just send me your e-mail address to theoknock@gmail.com; then, follow the instructions in the invitation e-mail you receive.

Once you're signed up, watch my Google+ page for announcements on where I intend to go. You can then go there yourself to watch cloaked and camouflaged demons lie in wait, or watch them trailing behind as I arrive.

Khoa Nguyen, my former landlord to the most widely known nexus of demonic activity in San Jose (aka my apartment), leaves me a drunken voicemail.