It finally made its appearance in the flesh, a Juggalo Demon, as shown in this series of still frames from a video recently made at 650 South Fifth Street, in San Jose, California:


This Juggalo demon had eluded to its upcoming appearance as far back as 10 months ago by blending its face with the windows and stairs of the house at 471 East Julian Street, also in San Jose, California—the nexus of hyperdimensional portal activity:

These types of demons, which are easily identifiable by the clown-like markings on their faces, are the violence-inducing demonic peers to easily influenced young males, who already have a predilection towards—and an innate thirst for—violence.

They encourage such youth to commits atrocious acts, such as hacking another man's head with an axe, just as Josh once came very close to doing to me one night in July 2006 (read Gang-stalker confesses, describes criminal agenda to victim and Gang-stalker eludes to demons in confession to crimes).

A Mexican family recorded itself in a video speaking in the manner in which demons taught them to do during a demon attack, and in a way that is designed to make their victim feel unsafe and without help during a time when a victim feels as if their life is truly in danger. Even if you don't speak Spanish, you can make the connection with demons by the only word spoken in English—pedophile—and the timing of your "overhearing" of the conversation—during a demon attack.

The person playing the videos of his family(?) aloud for me to hear is also seen in this video, looking as if he is going to steal items from my dresser.


NOTE | This person was recently discovered to know a blanket demon. To see what a blanket demon is, watch the video in Blanket Demon, Face-to-Face. I'm not real big on blanket demons because of my negative childhood experiences with them.


NOTE | Incidentally, this is what happened with respect to the above video; the person entering the door is Lee Ayers, the house manager. I wasn't trying to record him; but, it should be comforting for readers to see that the situation ended well.

The first time this tactic was mentioned in this blog, which is employed by the demons' human collaborators during an demonic attack, in which actions range from frightening appearances to actual physical assault, was in Demonic Attacks.

This video had to have been made well ahead of the time it was finally played in my presence, which required more foreknowledge of my living whereabouts than I did at the time; that conclusion is based on the current appearance of one of my current housemates, who has clearly aged and gained weight since the time of the making of the video to a degree requiring more time than the three weeks since moving in, which is the first time I met said roommate.
By James Alan Bush at 7/12/2012 10:49:00 PM No comments:

As a VTA light rail passenger, should I report all unattended parcels, bags, and luggage—and giant demon heads?

This past weekend's demonic attack was precipitated by the usual parade of giant demon heads blended with natural objects, light and shadow—and, luckily, I was able to capture (and keep) two more photos to add to my collection.


NOTE | The blending of a giant demon head is so subtle, the demons that comb my videos to remove the parts they don't want me to have miss them.

On the far end of the light rail platform, you can see the outline of a rather normal-looking face:

This, and the arrival of half-a-dozen phantoms to the far end of the train platform, is what two men tried to hide from my camera, as shown in this video:

As you can see in the video, the man closest to the camera has his bag raised conspicuously between my camera and the far end of the platform; then, as soon as he lowers it, another man jumps in the way. Finally, when the second man leans back and out of the way, the man has just raised his bag to block the view.

They are being instructed by Voice Demons to do this, who tell people during a demonic attack to do oddball things which are meant to annoy, anger and frighten their target. The have little regard for the danger they place people in by doing this, and the people who do it seem to have no regard for their personal safety.

Anyway, this isn't the only face that I have on camera, blending in with something else, a technique that is demonstrated in the well-known Chica o Vieja (Is it a young lady or an old woman?): 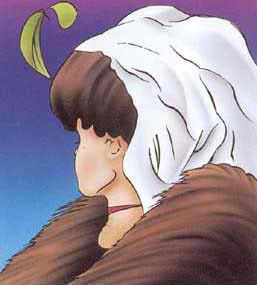 The most poignant example of demonic blending I have in my photo collection is taken from the first frame of a video showing the Spectre of Death, semi-cloaked in my entryway:

For more videos and information on demons blending with objects, read:

Sometimes, it's the letter 'S'; other times, it's the number '8'. Rarely, but when it's not 'S' or '8', it's 'J', as it is in this still frame from a new video made two days ago:
I wouldn't think much of this ordinarily—in fact, I didn't even notice it until I reviewed this video two days later—but, it always happens on the same and at the same time I capture demons on video, so I know that it's a message, and that it's from them whenever I see one of those three characters formed out of something that wouldn't normally form itself into one of them.
There's that reason, and the fact that, even though you can't see it in the dark, there was a cloaked demon in that tree, and I was pointing the camera at it in the hopes of catching a glimpse of it flitting off into the air or dropping to the ground (not that I would get to keep that for very long, of course).
The number '8' is, by far, the most prevalent character created by demons, and is usually accomplished using power cords or shoestrings, and made by sucker demons, who attach the length of their worm-like bodies to the length of the cord, etc., and then coil themselves into a figure-eight:

This phenomenon started in late 2006, and continues today in more than just the ways shown here—some of them astonishing and unbelievable. In the kitchen of my apartment at 1211 East Santa Clara Avenue #4, in San Jose, California, you could stand in one location in the kitchen and simply turn your head from side to the other and see almost every letter in the alphabet made out of something—a hook on the wall was the letter 'J', for example.

This kind of planning and effort is typical of demons. Consider the Spectre of Death, who, after visiting my closet three days earlier, arrange a set of coat hangers so that, when viewed from a certain angle—and only a certain angle—and in a certain amount of light, formed his face:
Demonic artwork can also be realistic, as shown by this combination of a power strip, light and shadow, which forms Scratchen's eye: