This morning, I received an all-too-familiar response from a paranormal investigator to my plea for help with demonic possession, one in which they basically implied a distinction between ghosts and demons, and thereby washing their hands of the latter.

No one, including me, knows the difference; and, no one—especially me—can afford to make one; but, that's another story.

Here's the e-mail I received, and here's one reader's agreement with my point (and just how irresponsible people can be with others' lives): 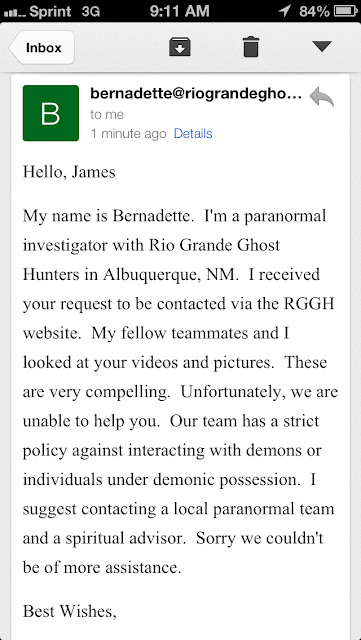 After posting this e-mail to my Facebook page with the heading, "You're screwed. Good luck!", Ms. LaBarbara Cook, a former high school classmate, wrote:

LaBarbara Cook ...well what do they DO then? smh. Hope you have luck finding a paranormal team or spiritual advisor And that they are able to help you.

James Bush I didn't really think they could help; and, quite frankly, I am "the help," if there's any.

What I wanted to show here (eventually) is that these operations are meant to make greater attractions out of local landmarks in the towns they live in. Bed-and-breakfast inns get more business if an "expert" deems them "haunted."

What I'm doing is kind of funny, in that I'm putting the real thing in their face and then asking them to deal with it.

That's when they point out the all-too-convenient "distinction" between ghosts and demons, and wash their hands of the situation.

LaBarbara Cook I was thinking the same thing (you are the help)...you are somewhat of a guru just out of necessity. What is the difference between a ghost and demon? Is it there intentions?

James Bush I wouldn't know the difference from experience; but, I'd say ghosts are a non-problem, yes.

I'd say the best person to answer this question to would be a real exorcist; I'd like to, anyway, as it would be a good addition to my list of qualifications of such, which I started in READER | What are the qualifications to be an exorcist? But, although I've never knowingly met any real exorcists or even know if there are any out there right now—they could not possibly be at all like the ones you've seen in movies, and, even then, do not all invoke the name of Jesus Christ as their sole means of exorcizing demons, having that ability only by righteous living [read Matthew 7:22]—I'd say they don't know this fact like I do, or else they would have shared it by now:


The presence of chroma in an image showing a paranormal event indicates demonic or ghostly activity. 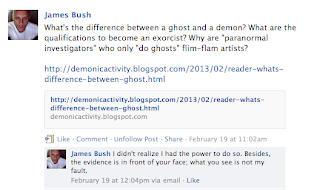