My hands are injured from a recent spate of attacks by sucker demons and eye spider demons, which lasted over three days this past weekend, mostly at night while in bed.

As a consequence of near-constant fighting, my fingernails have white-colored stress lines, which extend from their tips to the middle, from having been bent back while prying at these incredibly strong demonic entities; the pressure from the bending of my fingernails have caused tiny blood spots to appear underneath the fingernails, too:


The damage can not only be felt, but seen, as well.

For example, the nerves in the first finger and thumb are almost completely number from having pinched both types of demons until their cloaks collapsed and bodies explode in a dim flash of red or yellow light (a video of a leg of an eye spider demon, pinched between my fingers, can he seen in Eye Spider Demon, Flailing Leg).

And, two nights ago, the top of my left first finger turned a yellowish-green color, and felt extremely cold and numb. This reoccurs every time the weather is chilly, especially at night. The top layer of skin on both thumbs and first fingers is number, although there is still some sensation beneath the surface.

Sucker demons and eye spider demons are not only lighting fast, but can evade capture by sinking into your skin:
They can also evade your sight by becoming virtually invisible, as shown in Sucker Demon Slinks Down Back of Neck on Vimeo.

Also, touching one for too long results in extreme pain from either heat or electric shock.

For more on sucker demons and eye spider demons, read about one months' worth of injuries and news caused by and related to these demons:
By James Alan Bush at 4/25/2012 05:40:00 PM No comments: Links to this post

One method of exposing a demon's cloak, and determining some of the physical properties of both the cloak and the demon themselves, is with a can of hairspray and a lighter.

The faces of two of the red-faced demons can be seen on Vimeo:

The faces in these videos, however, are difficult to view, at best, due to lighting conditions and the nature of a demon cloak (it's very faint); and, that's where the hairspray and lighter come in.

By spraying a stream of fire directly onto a cloaked demon, it will be exposed for a camera when it hits the cloak.

The first time, before the demon has had time to adapt, it will wrap around the shape of his body, or, in this case, his face:


TIP | For those endeavoring on such a scientific mission: the hotter the fire, the more physical properties revealed. Opt for old formulas of hairspray, which have plenty of alcohol.

After the demon adapts, the flame, when it hits them will stop abruptly in a hard line when viewing the profile, as shown in the picture above, and in the picture below:

NOTE | The fact that the fire sparks and blue flames occurs when fire comes into contact with a demon narrows the possibilities of what a demon is made of when in physical form.

What was also discovered about fire and demons: they are susceptible to fire when in physical form; but, not for long. If you are going to burn them away, you have to act before they adapt, and with the hottest fire you can find.

My new roommate, apparently still unhappy about his encounter with police three days ago, following his obscenity-laced tirade over a locked front door, locked me out three times yesterday and once yesterday (read Demonic plan to oust me from new apartment backfires on roommate) for more about his near-arrest by police).

He did this by locking the deadbolt, knowing as many as four days ago that the key he gave me for it doesn't work. According to the landlord, who I called for assistance once I discovered this fact, my roommate hasn't given him a key to any of the locks at all since changing them.
Without a working key or the landlord's spare one, I had to spider-crawl up and over our decrepit patio fence, and then slink through the open patio door the first time. 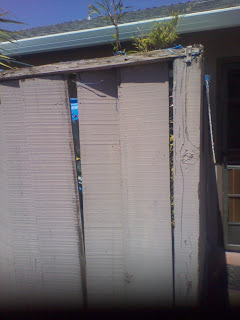 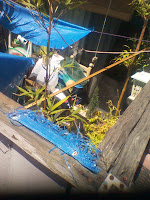 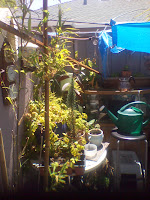 The second time, he locked the patio door, so I had to trudge through the foliage planted alongside the building to reach my bedroom window, tear a hole in its screen, and then crawl through it. 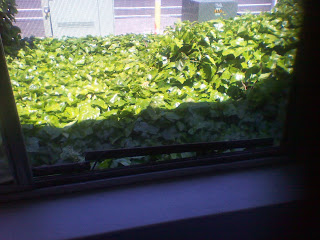 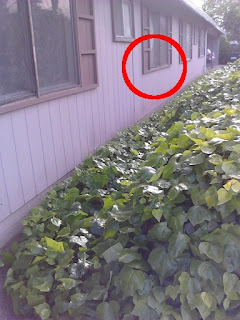 For some reason, that was harder, but less dangerous. The other two times, I crawled through the window, as well.
On the fifth time, I beat the front door with my fist about five times. Apparently, it was loud enough to rouse a neighbor around the corner, get noticed by the Voices demons, who talked about it for an hour afterwards, and, luckily, my roommate, who had ignored my door knocks and phone calls all previous times.
During this, I was pretty surprised to learn how easy it is to break into my apartment. If it weren't for the horde of demons' constant presence and occupation of the place, I'd worry about burglars.
By James Alan Bush at 4/25/2012 03:31:00 PM No comments: Links to this post