Following are guidelines for enhancing images showing demonic attack using Photoshop, particularly, those captured via the panning-camera/motion-blur digital camera effect, in which the non-demonic subjects appear blurry, but in which EMF-saturated demons (and/or their irradiated weapons) appear almost perfectly clear, due, of course, to a camera in motion and the stronger imprint such radiation makes on digital image sensors, respectively.

Underscoring the need for proficiency in the skill of enhancing images captured by this effect are the startling and savage demonic attacks shown in these recent posts:
Without this effect, many demonic attacks would go unnoticed. They happen in the blink of an eye—literally—with the injury they cause covered up just as fast; moreover, the weapons are usually cloaked (semi-transparent), so even a slow deployment would make the attack nearly imperceptible.


The only drawbacks to images made with a moving camera and/or subject are blurry, hard-to-make-out weapons or demons, and even blurrier subjects, with the two so entangled in each others' motion trails that it is difficult to separate them visually. Attempting to use such images to educate the reader on the subject of demonic attack and the weapons used for them is almost as nightmarish as the attack itself, and often become a distraction to the problem, shifting the readers' focus from the duty borne from such attacks to whether poor image quality justifies cowardice.


NOTE | To be fair, even if these types of images were not blurry, the weapons themselves are so foreign to most people that even a clear view of them would be difficult to absorb and comprehend easily.

The Photoshop techniques in this post were developed specifically to increase the contrast between demon and non-demon subjects in both color and sharpness to distinguish between the two more clearly—so that the demons and/or their weapons can be examined in better detail—all while attempting to maintain the integrity of the remainder of the image (i.e., without increasing noise or distorting color). The following image will be used to demonstrate them:

As you can see, these are two different things. In the image below, the visibility of the metal prongs latching onto my face was much improved by the Emboss-filter sharpening technique demonstrated in TECHNOLOGY | Capturing and revealing hard-to-see sucker demons in a digital photo; but, the problems of oversaturated color and excess noise throughout the remainder of the image—particularly, my face—are amplified:

This is a big problem when the goal is to convince skeptics that a problem exists. While the enhancements are sufficient to point out the difference between a random blurry object that might appear in any image and an object that is piercing the side of my face, the imperfections surrounding the weapon suggest CGI-chicanery to those unfamiliar with this problem.

The solution, then, is to tone down the enhancements in the areas where sharpening and brightening were not necessary (or were unavailing). Using a skin tone mask to prevent the sharpening and brightness enhancements from being applied to my face prevented the over-saturated colors and excessive noise, while increasing the contrast between my face, the metallic prongs, and the background; the result is a much more realistic image.

Although subtle, the changes to the sharpness and contrast of the demonic weapon make it much more visible without the original image appearing altered at all.

Step-by-step instructions for enhancing demon-weapon attack images in Photoshop
For those new to Photoshop, and for those looking for more than just general guidelines on enhancing images of demonic-weapon attacks captured by the panning-camera/motion-blur digital image effect, detailed instructions are provided below:

A.  Brightening the image
B.  Sharpening with Emboss 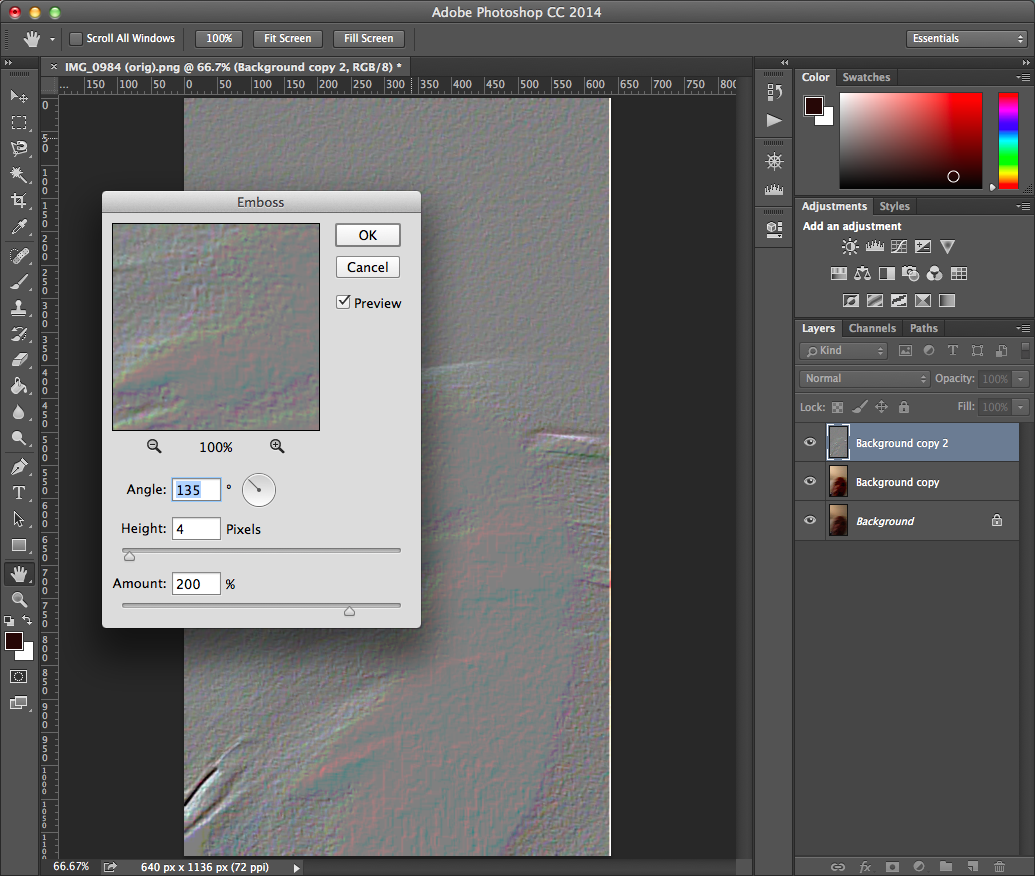 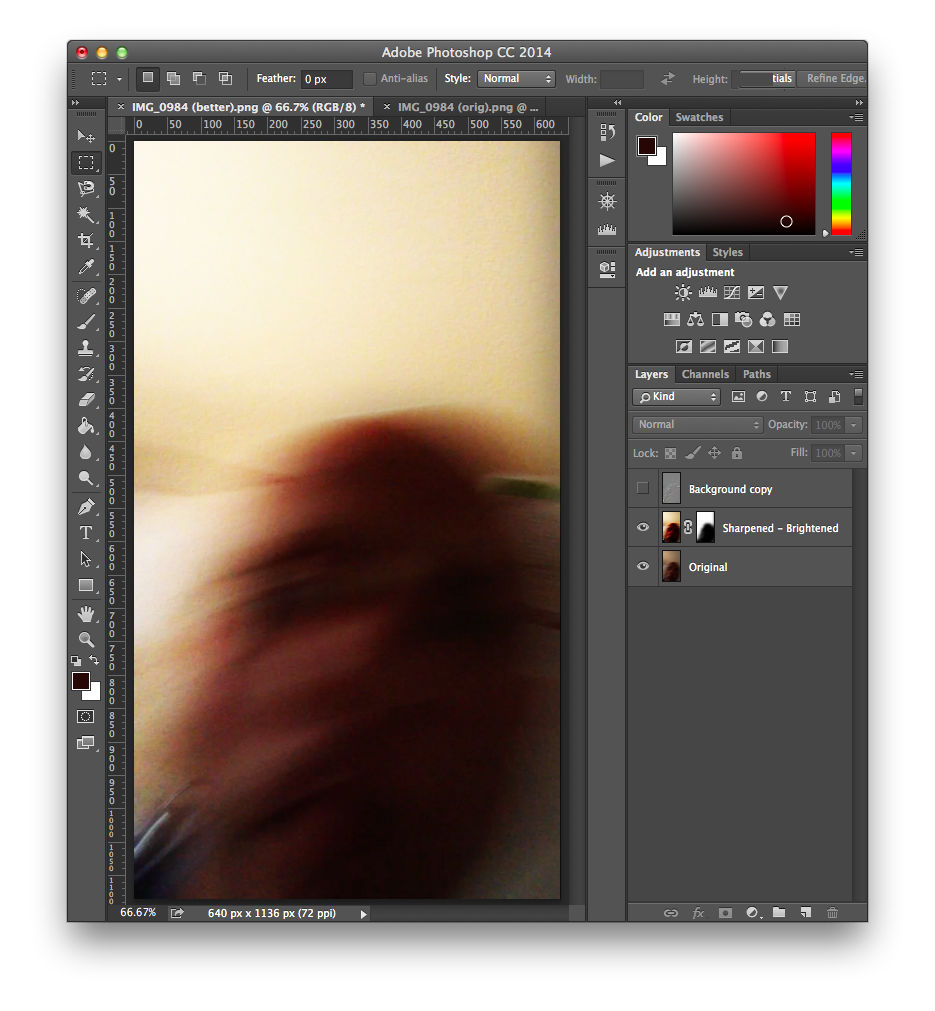 Automating demonic-attack image enhancement in Photoshop
To see these guidelines implemented on the example image in Photoshop CC, download and install the provided Photoshop Action script and the source image:

After installing the action in Photoshop CC, open the image and run it to see all of the instructions provided above applied to the image:


NOTE | For even greater contrast and sharpening, run the action again on the enhanced image.