A sexual interlude that was recorded on video two nights ago at The Watergarden shows multiple demons harassing me, while ignoring my partner.


Over a dozen different demons appear in just under two minutes of video; the presence of countless sucker demons, attaching themselves to limbs where they (supposedly) rapidly atrophy muscle tissue, can also be seen. 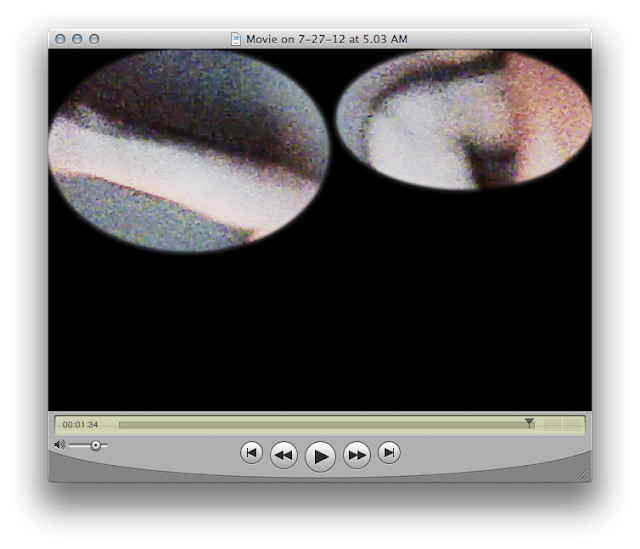 NOTE | The Voices Demons do this on a daily basis, claiming on an hourly basis that they want to take away all my "muscle mass," so that, "in the future, nobody likes [me]." The also claim that they "can make someone look like they have HIV disease, even when they don't." Moreover, they have stated time and again that the goal is to make me look so, in addition to rendering me blind, incapable of using my arms and legs by degenerating the ligaments in my knees and elbows, and damaging internal organs, particularly, the kidneys. They hurt my left eye, knee and elbow joints, and the area at and near the base of my skull, everyday. We don't think we're taking anything we don't have a right to take, they have said.

The video, which is available by e-mail request to all persons over the age of 18, and who consent to viewing sexually explicit material, helps solidify my theory on how demons modify a human's appearance in order to ostracize him from society, as was discussed in Demons give people HIV to endanger, ostracize.

The sucker demons, which look like black, wavy lines on video, are attached to the very places in which muscle tissue is rapidly dwindling, and where I sometimes pull off cloaked sucker demons.

This is the fourth video from The Watergarden that shows demons; the other three include:
For authenticity purposes, the full, uncensored video can be downloaded from MediaFire. You will need to increase the brightness of the video and then skim it frame-by-frame in order to see the demons for yourself.

Another demon lives inside his stomach cavity—almost like a conjoined twin—but remains cloaked and enveloped in an outer layer of skin to avoid detection. I saw it come out in the reflection from a pool of water on the floor between two bathroom stalls on that night. Conjoined human-demon pairs have congregated to the Bay Area, and are particularly common in San Jose.
By James Alan Bush at 7/29/2012 09:53:00 PM No comments: Links to this post

Approximately one week ago, I was kicked out of my home, two days after paying $700 to the house manager, Lee Ayers, Heaven's Gate Recovery Homes, without any of that money refunded. Left homeless, without food or money, without transportation or shelter, I've been relying on the kindness of strangers, while hoping for the best.

That may seem like a vain hope, even if you only consider what you've read on this blog (because you haven't even read half of what's happening yet); but, just when I think life has hit rock-bottom, I find this in the mailbox at my now-former home:
Why might I consider receiving a death threat by mail hopeful for my situation? Because I could use the   help from those whose job it is to handle these types of things, and I am sure that this, in combination with other things, should lead to such help.


NOTE | To learn about the law enforcement's blasé attitude towards issues like these, see Two thieves discuss cops refusal to address constant burglaries.

In that past, it has been impossible to get the help I need without bringing trouble on myself. As is told in Night of the Gun Chase, a man with a "working handgun, with readily accessible ammunition," who chased me with a gun in my home, did not get arrested for that, and retaliation for having called the police went unfettered for months afterwards.

The reason why I was kicked out of my home at Heaven's Gate was simply because I called the San Jose Police Department to report multiple thefts of my property. At that time, I also reported multiple death threats by Alberto Gomez and his family.


NOTE | To hear the death threat song, and to read more about the thefts and my residency at Heaven's Gate, read House manager issues three-day lockout.

On December 6th, 2006, Jonathan Wong eluded to being shot at "Gate of Heaven," or Heaven's Gate.


NOTE | To hear about my future death by bullet at Heaven's Gate, which was prophesied during a job interview, read Job interview from Hell.

The letter, to which a bullet was taped, was supposedly sent by Joseph Ortiz. He has been a periodic figure in this ordeal since 2006, when the gang-stalkers first attacked. He was listed in the phone book belonging to Daniel Anthony Napolitan, one of the original gang-stalkers, who "infiltrated" my home in Sunnyvale.


NOTE | To hear two gang-stalkers discuss their implied affiliation with demons in an audio recorded conversation between them, see Secret recording of conversation reveals demonic agenda.

An e-mail was purportedly sent by him a month or so ago, seeking same-sex encounters with men. This is one of three I've received with his name in the From: field of the e-mail.

This death threat not only follows on the heels of the ordeal at Heaven's Gate, but yet another "Anger Management Ritual," in which demons and their human collaborators engage in demonic assisted gang-stalking tactics (which, this time, didn't go quite as they'd hoped. I won't say why, but let's just say some of them looked a little "jumpy," like they got shocked by static electricity).