As I road back in a speeding SUV back to San Jose from San Benito County on the very same night of the two incidences of forced sodomy/oral copulation I reported just last month, I captured another flying demon on my cellphone video camera. As the blue-headed flew up to the passenger side window, it briefly peered inside, and then quickly drifted back into the darkness.

Although flying demons outnumber birds in San Jose (did they eat them?), they are typically of the flimsy, wind-blown sheet type of flying demon (the rare exception being the Spectre of Death); but, this demon, whose absence of hair typifies all demons of the flying kind, clearly has a heavier constitution, judging not only by the size of it head, but the fact that he flew alongside the vehicle, instead of directly at it.

A lightweight flyer does not have enough mass to withstand winds at such a high rate of speed, at least not with the control and grace of this flyer. In order to reach the car, the flyers of the flimsy kind would have to dart directly at it and then latch on in order to peer inside.


NOTE | On this night, the highway trip was like driving on the inside of an haunted house; demons were everywhere. These were new demons, that I had never seen before, and have not seen again. This was but one fact that formed my theory that demon hordes are bound to one location (near the point of origin of arrival—they literally crawl out of hellholes), and are restricted in range. Voices Demons are the most vulnerable to range-restrictions; sucker demons are highly transportable.

IAccording to Detective Craid of the Santa Clara County Office of the Sheriff, my complaint for forced sodomy and forced oral copulation was hand-delivered to the San Benito County's Sheriff's Office on July 11th, 2012; however, a representative of that office could not confirm its receipt.
The crime was reported on June 19th, 2012, to Detective Noe Cortez. 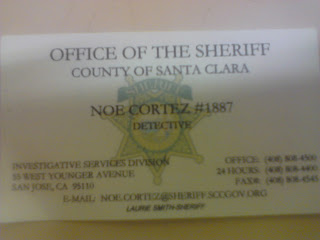 I left a voice message with a detective working in the sex crimes unit this afternoon; however, so far, my call has not been returned. So, as things stand so far, nobody in either sheriff's office knows where the case is.

UPDATE: A detective from the San Benito County Office of the Sheriff called me back at 4:24 PM, and, at first, stated that she had received a fax from the sheriff's office in Santa Clara County, but was still waiting on the audio recording of the interview from them. When I told her that I had just talked to Detective Craid about the case, the aforementioned detective said that she hand-delivered everything to San Benito County on July 11th, 2012. She was able to confirm that, and stated that she had been on vacation, and just returned to the office yesterday.

Once we were both on clear on whether she now had everything she needed, I asked her how she preferred to proceed. Long story, short: I have an interview tomorrow at 1:30.

Finally, I asked her if she had received anything from San Jose Police Department, which also is conducting an investigation, since part of the crime happened in San Jose and the other part in San Benito. She said she was unaware of that, and said there were no notes on it the file that came from Santa Clara County.

I asked her to get the files, then, but she said I had to do it because San Jose PD will not give information over the phone (or something like that).

So, I went to San Jose Police Department, who said she could call, and then gave me the number.

I tried calling her to give her the number, but she didn't answer the phone, and her voicemail didn't pick up. I called the main number, but, instead of transferring as they said they would, dispatch put me on hold. After about 6 minutes or so, I hung up.

UPDATE 07-20-2012: Today, I received a call from the San Benito County detective; she wanted to cancel the interview for today, and then reschedule for Wednesday. After explaining that it was next to impossible for me to find a ride to the far-off sheriff's office, she offered to meet me at my current residence.

The voices of evil don't want to be heard by everyone

I am not a sound specialist. And, apparently, I suck at trying to be one. But, the situation is calling for audio recordings of the Voices Demons at work, so that is what I'm going to try and give it, even though my success at getting anything that I've produced to other people has been almost nil up to this point.

The problem isn't just know-how or whether you understand the science of sound or are an expert user of sound-editing software—I have produced some pretty good edits; rather, that's just part of the problem. The other part is trying to get something done that's really hard to do, that really powerful demons don't want you to do, and that you really don't know how to do (for me, that sometimes applies to eating a decent meal).


ONLINE | A growing collection of audio files processed to boost the dialog of the voices demons' and their human counterparts will be available soon.

It seems like almost every time I try to get something done, I get attacked—or at least really bothered—by demons, and the work I did is taken. 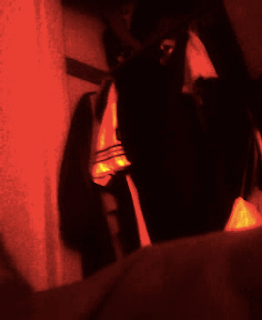 In spite of this, I will always try to get these audio files processed and out the door; but, even if I succeed, there's still the problem of a receptive audience.

NOTE | The above reasons for the lack of interest in the audio files also apply to any situation that you're trying to bring interest and attention to. And, let me tell you, having a really, really interesting problem does nothing to get around them.

Still, the fact that there is nothing in this world like these audio files should be of interest to some. So, I will post as many as I can, as often as I can, make new ones, for as long as I can, and hope that I will find a way to educate as many people as possible about these particular types of demons and how they work—the latter being the final part of the problem.

There's just plain ol' kicking your ass; and, then there's messing with someone's mind until they go insane, permanently. That takes time and know how. It is a science to humans, and a religion to demons. They worship it, literally. It is the ultimate desecration of God's image to hurt mankind in this way.

But, in spite of its complexity, it is subtle, meaning that you may not recognize it in others or yourself when it's being done to you. That's why I want an interested audience to educate. If you knew the things they do to obtain their goal of making someone insane, how they do it, and what the results look like, you would never wish it on anyone.


NOTE | After seeing the depravity that is the Voices Demons' work, I no longer wondered how Jesus could really be all-forgiving. After all, there's some awfulness out there, to be sure. I figure that He knew more than He told us—He saw how some people really go bad, and why some of their choices are really made. Now, as long as someone asks and means it, it is easy for me to forgive because of the things I've learned through this experience. I can honestly say I have no grudges or resentments towards anyone at all these days because of it.