This is a draft of a post that will describe and show the demonic inhabitants of the attic above the apartment I rent at the house of demonic torment, also known as 2967 Sherbrooke Way in San Jose, who, among other things, have been sculpting faces and demonic figures out of insulation, as is shown in the upper-right corner of this still frame: 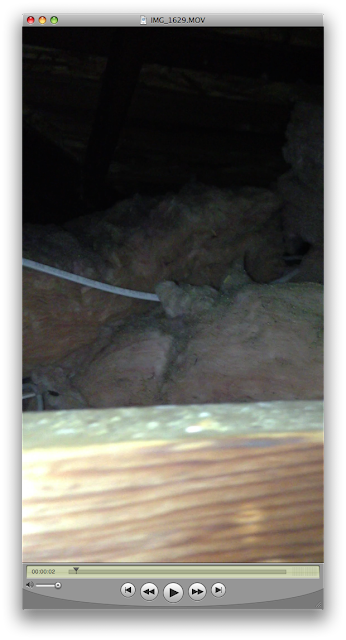 For now, I'll show just a few photos from a video I made with my cellphone, which I made by standing on a recycle bin, poking my camera through the attic hatch, circling it around, climbing down, and then looking at the video (I'm not going up there by myself):
Some readers had difficulty distinguishing the head from the surrounding insulation; this series of images attempts to rectify that:

The video these images came from show demonic faces sculpted out of insulation (you're not going to see much for yourself; the low-res copy streamed by YouTube makes it look like an ordinary attic): This is a video made just before that one, in which, at the end, show Scratchen's eyes, glowing in the dark, which has occurred with alarming regularity at this house and others' within the past several months:

#511 - PHOTOS | Troll-like demon hides, torments from behind my toilet

Although I could hear and feel something behind me while sitting on the toilet two days ago, I couldn't get a good look at what it was. Even while I twisted and turned as fast as I could, all I could catch was a glimpse of the tail-end of a fast-moving blur, which kept dodging back and forth beneath the toilet tank to avoid my gaze.

My suspicions were that it was a demon of the imp kind, which were quickly confirmed by the painful poking and burning that ensued shortly thereafter.

To get a better look, I grabbed my iPhone video camera and passed it around the bathroom and toilet. I knew from experience that trying to record a video of demons this quick was impossible, in that they use magic(?), if you will, to avoid being recorded. To the one holding the camera, these demons appear to be intuitively evasive, moving as if they were the one holding the camera. They can cloak, too, and seem to know just which spots are out of reach of both the camera and your eye, even if they are looking from two different directions. It even physically alters the camera's angle and zoom, if need be. In short, you simply can't outsmart this magic.

It isn't perfect, however, and, if you record enough video of the area in which you spot a demon, moving it back and forth, and up and down, for as long as the demon is around you, you'll eventually pan it across the demon. When you do, the demon might be moving too fast to be seen well (or at all), or it might be cloaked. Either way, you won't capture an image of it unless the camera is in motion.

That was the case with this image, which shows a bearded, troll-like demon, wearing a cone hat, with a painted line across both cheeks and around the eyes, stared upwards me from behind the toilet;
it appears in only one still frame in a video made in my demon-filled bathroom, standing at an odd angle from the floor:

NOTE | If you're viewing this image on an LCD display, tilt it up or down 5 to 10 degrees and increase the brightness to the highest setting. That will smooth out the jaggedness of the lines in the troll's face, making it easier to find.

To get this image, I pointed my camera towards me while I sat down on the toilet, moving it from top to bottom. When the camera reached waist level, I quickly pulled it towards me to switch hands with it; in the video, that motion looks swift and blurry:
A subsequent frame-by-frame skimming of this segment of the video, revealed multiple troll- or gnome-like demons. My iPhone does not allow for one-by-one frame skims; but, as soon as I can get my laptop screen replaced, I'll update this blog with those images, as well.

By the way, the painted lines on its face serve as camouflage for demons blending with the patterns on fabric and wallpaper and upholstery, but is also a fashion statement of sorts that is common among all demons possessing such items as blankets and pillows [see VIDEO/PHOTOS | The Pillow Demons and VIDEO/PHOTO | The Bathhouse Blanket Demon]: