Right from the start of their six-year campaign of seemingly unending torture by violence (and other means), demons have targeted my fingers [see Nerves, fingernails damaged from fighting sucker and eye spider demons]. They are not only trying to induce pain, but also loss of functionality (sensation, flexibility) and, eventually, the loss of my fingers.

In the past, their efforts were a little less deliberate than they are now. Before, the damage came from removing, fighting and otherwise touching any of the demonic entities sent for attack—entities that one simply cannot ignore due to their well-known and -honed ability to continuously compel removal until they are, in fact, either removed manually by their target (which is usually done with the target's hands, of course) or removed naturally by the cessation of the period of high demonic activity that brought them into contact with the target. Now, they have transitioned to a more direct approach, specifically, adhering themselves to your fingertips while cloaked. Just like the cloaks of the demonic entities formerly used, the shadow-cloaked demons (so named because their cloaks look like shadows) are harmful to human tissue. Not only that, but their cloaks can be modulated to cause even more damage than they would under normal conditions.


NOTE | I'm not sure whether a demon cloaks its molecules in closer relation to their native state or to ours to accomplish this; but, it's one way or the other, as the only variances in a demon's cloak lie between fully tangible to us and fully tangible to their original environment.

How I discovered the demonic culprit connection
Although I could feel the pain inflicted on my fingertips as demons burned them and could also see the resulting damage, I've never actually seen the demons until I inadvertently captured them in a video made during this latest period of high demonic activity.

At first glance, I noticed unusually shaped, positioned and colored shadows cast by my fingers by the camera torch in this portion of the video:


Evidence of demons revealed in the video
After skimming the video frame-by-frame, though, I discovered that those shadows were actually cloaked demons. They were easy to spot, in that, unlike real shadows:

Two other give-aways were (1) the actual faces of the demons, shown in frames in which they are decloaked (i.e., a state of molecular naturalization, which causes them to exhibit characteristics of molecules native to our environment—in this case, visibility); and, (2) the absence of any shadows in still frames where they should appear by nature (I don't know how that works; but, I know if something appears to deny or lack its usual nature, demons probably did the deny or caused the lack).

NOTE | Because all of the demons whose faces are shown always appear between two fingers in the still frame, it is likely that the proximity of the fingers contributed to their visibility as much as the demon's partial decloaking (light concentrates as it passes close to surfaces; a demon near my grip would never fully decloak, as that would make them tangible and therefore squishable).

Following are a few still frames taken from the aforementioned video that show shadow-cloaked demons on and over my fingertips as they burn them:

Other demons that cloak into shadow
The fingertip-burning demons are not the only demons whose cloaks resemble shadows; Google Shadow Demons for others.

Having the same problem?
Here's a solution that works every time, all the time: oil-based products—in this case, surgical or cleaning gloves and Tea Tree Oil:

The gloves and the oil both provide a barrier; but, the gloves won't dry or rub off, and the tea tree oil keeps bacteria from growing on your hands when wearing gloves over the long-term.

Why does oil work as a barrier and other materials (probably) don't
For reasons I can only speculate, oil is difficult for cloaked demons to both adhere to and pass through (at least pass through while adhering to another type of surface. My thoughts are that, because oil is very dense at the molecular level, it is difficult to adapt their cloaks to accommodate such a wide variance in the density that exists between oil and all other materials.

For example, a demon can easily adhere to one kind of paper and just as easily handle passing through another kind of paper should another kind fall on top of him. The differences don't require much modification; however, I'm thinking that difference between oil and anything else is the difference concrete and water.
By James Alan Bush at 11/18/2017 09:57:00 AM No comments: Links to this post

You shall have no other gods before Me. You shall not make for yourself an idol, or any likeness of what is in heaven above or on the earth beneath or in the water under the earth. You shall not worship them or serve them; for I, the LORD your God, am a jealous God, visiting the iniquity of the fathers on the children, on the third and the fourth generations of those who hate Me. Exodus 20:3-5

Let me start this post by emphatically stating this: the reason God stated for His ban on graven images is the only reason there is and that need be, and that, in spite of a title that suggests otherwise, there is no unmentioned or cursory or derivative reasoning that exists.

So, why suggest that there is another reason—an objective reason in addition to God's "subjective" reason? It's because I doubt anyone has this problem anymore, and yet the danger (or punishment, if you will) still very much exists—and that coming from demons. Let me explain.

As recently described in Second upside-down laundry-basket demon, demons prefer certain materials over others for possession [see also Strangest things, places demons possess]; it is their primary concern, in fact. Secondary to that, however, is the shape of the object to which the material belongs. The closer to the likeness of a given demon (e.g., head, arms, legs, etc.), the more suitable the object is for possession. In other words, carving wood or chiseling stone in the shape of even a human solicits or invites demonic possession into the carving or chiseling. Obviously, that's not what you want to do.

How does that factor into today, though? For one thing, it explains the possessed-dolly phenomenon, which started last century, and which is still going strong. The following conversation, which started with a post to Facebook by a reader concerned about a possessed baby doll, elaborates:


...lest ye corrupt yourselves, and make you a graven image, the similitude of any figure, the likeness of male or female. Deuteronomy 4:16

DEMONPAPER | The Life of a Demoniac Wallpaper Gallery (for iPhone)

This gallery is a collection of toss-away (useless) still frames, taken from videos made during periods of high demonic activity; even so, they were too beautiful not to post. Although they do not pass muster for posts that show demons as notable or newsworthy evidence of demons or demonic activity, they are unique and completely irreproducible—and stunningly beautiful. They contain color combinations and scenes that not even the world's top artists could ever reproduce; that's because they were made under circumstances that only I can reproduce, and the light reflected from the objects is reflected from cloaked molecules, which are only present under those circumstances.


NOTE | An even more comprehensive set of images like those found in this post can be found on Behance.net in my Social Media 2017-2018 Blog Promos Ad Gallery. 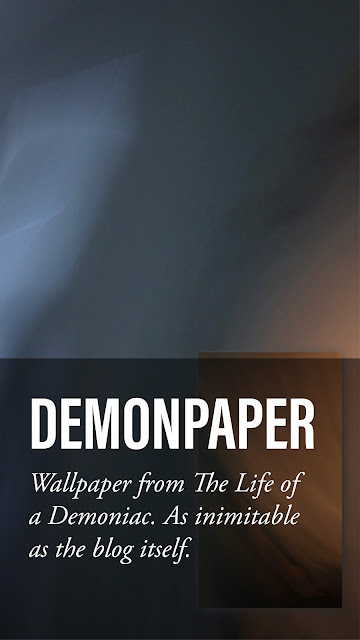 Accordingly, they are one-of-a-kind—rare jewels, if you will—that are not just praise-worthy by any standard, but fit for use as wallpaper on any plus-sized iPhone.


NOTE | This gallery is still growing; there are thousands of still frames to sift through. Check back periodically for more. Also, click an image to enlarge it before downloading it to your device.

How these were made
I made these by setting the exposure duration of my iPhone camera to maximum and, depending on lighting, by adjusting the ISO (usually, lowering it); then, I twirled the camera while recording video. This is one technique I've used for seeing demons that cannot be seen with the naked eye [see Finding demons with iPhone X, from start to finish].

Why these were made
It's one thing to figure out how to capture demons on digital media; it's another to figure out how to sift through the layers upon layers of them. Demons don't appear one-at-a-time; rather, hundreds at-a-time; and, they don't come one-by-one, choosing instead to blend with and overlay each other, so that you can't tell them apart without squinting.

Rotating (or otherwise moving) the camera at different speeds does that for you, in that different speeds captures more of one frequency of light than another; not only that, but the faster the movement, the fewer frequencies captured. That eliminates most demons from being captured by the camera, leaving only a few (if any).

You're free to enjoy (but not sell or otherwise lay claim or copyright—they belong to me) any of the images below:

A pair of still frames, taken from the same video; one for the Home Screen, one for the Lock Screen:
If these look like streaks of light from street lamps while my camera was set to a high-exposure duration, you'd be half right. The whole truth is that they are also life forms that exist in the light, as well (don't ask me how it works; but, they communicate using a written language, as shown and more fully described in CHALLENGE | Decipher the Demon Code):

NOTE | An example of the "writing" from these life forms on the night the images above were made follows:

A vortex, created by setting the exposure duration of my iPhone's camera to its maximum setting, and then rotating it; made in the bedroom of Casa de Scratchen. Several of the still frames show demons:

More vortex photos, this time from the kitchen at Casa de Scratchen (the middle of the vortex forms a demonic face in some):