Video footage taken while inside the home in Santa Clara where I stayed for almost an entire day during the most recent "Anger Management Ritual" demonic/human attack shows not just a demon blended with a bed sheet, as is typical for a blanket demon, but shows two blanket demons merged into one bed sheet, which is a first for me:

But, the best part is this: the video also shows a specter of a half-breed demon that looks like an African woman merged with blanket demons, essentially joining the two types of demons, for a total of four demons, to the same object and, consequently, to each other. In other words, if you focus your eyes in one particular area, the bedspread carelessly tossed on the floor reveals three blanket demons in a row, all facing the same direction; but, if you look at the bed sheet at another focal point, you can see the faint image of the specter of a demon half-breed that looks like an thin, African woman clothed in a knee-length toga-like robe, sprawled on the floor, as if in mid-struggle to crawl. She is shown in the beginning, moving very slightly and slowly, mostly facing downward, with a marginal tilt of her head to the side:
Taking another view—and rotating the video 90° counter-clockwise—you can see two blanket demons, from their waists and upwards to the tips of their hooded shroud; one is facing the camera, the other with its back to it, and with their cheeks pressed together in an apparent dance, their arms extended, hold each other hand-in-hand: 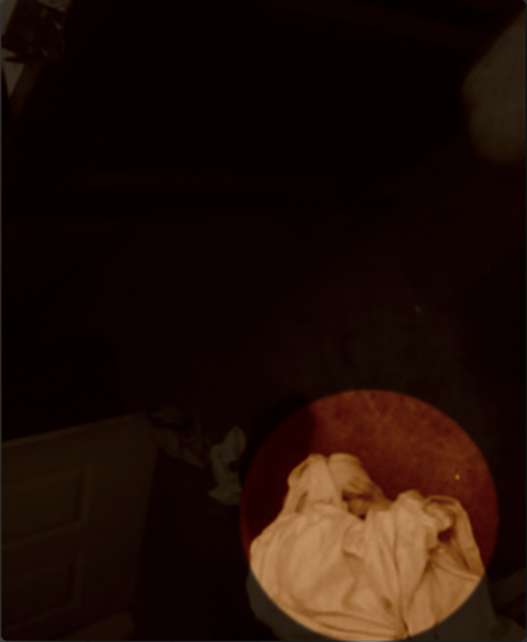 While these are not the only demons merged with this bed sheet, they are the most prominent and active.

Videos shows hundreds of demons participating in Anger Management Ritual attack
blended with every knick-knack and piece of furniture in every house or building I entered, and
By James Alan Bush at 8/07/2012 11:46:00 PM No comments: Links to this post

During today's ongoing Voices Demons-led Anger Management Ritual, which started three days ago, and has continued around the clock since, I used the sepia color mode on my cellphone camera, as usual during this type of attack, to locate and visually enhance cloaked demons; and, while staying overnight at a former acquaintances' house in Santa Clara, there were plenty to detect in his house.

In this still frame taken from a video clip made there, you can see the head of a demon blended with the drawer handles on his dresser:

This is not just any of the hundreds upon hundreds that can be seen in still frames made during an Anger Management Ritual; it is the same demon shown in Specter of Demon Illuminated by Light Glare:
Following is a preview of the video showing this demon, the very same who was also a childhood tormentor:
It may sound silly for me to be afraid of dresser drawer handles, until you consider that this is one of my childhood tormentors that I had thought until very recently was nothing more than a nightmare. Today's appearance, then, means that the same demon who terrified me as a child is still doing so nearly 30  years later.
That's a sick kind of obsession, and it's no wonder those who work with him, such as the Voices Demons, who spend all of their time only doing evil things, daily, for years on end.