With the help of a screen window, I was able to capture on video a phenomenon related to demonic possession, which is otherwise very difficult to see without, and which is a rare sight, anyway, including for those to whom demon possession is their constant reality. Specifically, I captured somewhat watchable video of my hands and forearms and face replaced by that of a demon possessing me, and then back again. You can actually see my hands and forearms make a step-by-step transformation between human and demon; and, in one still frame, you can see my hands and forearms actually disappear altogether at one point:
This isn't the first image in which my arms and forearms appear to be missing; one still frame from a video made in the fall of 2011 (since deleted) showed both hands and forearms amputated, as well as both eyes white from blindness. That was different, in that the image was created by demons as a terror tactic.


NOTE | If the absence of chroma in the image showing future injury at the hands of demons didn't indicate that the image was modified by demons to be a threat, the actual threat made out loud by the Voices Demons did. Every demon expressing itself in a human generates chroma.

In the past, I have only been able to capture a still frame or two showing the final transformation (or one or two interim steps too spaced in sequence to envision the full process), which I have to glean by skimming frame-by-frame videos of persons demonically possessed; and, that's only from video made while the camera (or subject) was in motion, resulting in blurry images that required extensive sharpening and other enhancements to be passable as evidence of demonic activity. In this case, the screen in the window achieved the same effect of revealing hard-to-see signs of demonic possession in a person as an in-motion camera, but without the motion—and, of course, the blur, save that from the transformation itself.

Ordinarily, the light emitted by a possessing demon is too faint to be seen on camera; in fact, it is so weak that it almost cannot be seen by the human eye in daylight. However, as light waves emitted by a possessing demon passes around the wires in the screen, they are diffracted, thereby amplifying the light to a level that, in the right lighting conditions and at a certain distance, renders an otherwise too-faint-to-see demon bright enough to capture on camera.

Unveiling the demonic cloak is pure science
This works because there is no such theoretical thing as a perfect cloak, meaning that no demon can achieve 100% invisibility by cloaking, and reflect at least some light. Nearly every demon that can cloak reflects enough light to reveal them by means that apply certain principles pertaining to the science of optics in their design. Such means, and the scientific principles on which they are based, include:


NOTE | These means are demonstrated using real-world images of cloaked demons revealed by them.

Mysterious role of light and shadow in demons' appearance, power also shown
This video also demonstrates the so-far unexplainable—but oft-observed—role light and shadow plays in demonic visibility and power. In the video, as I recede into the darkness towards the end of the driveway, you can see the demon's face and hands and forearms emerge, formed by a gradually increasing concentration of chroma (red, flame-like light) on those body parts; as I walk back towards the light, the chroma dissipates, and my body parts resume their normal appearance:
This has been seen before.At least two other videos made recently not only suggest that light and shadow have some sort of effect on the visibility of a demon possessing someone, but also that they govern whether a demon can use its powers for itself and the person, such as shadow demon "speed-walking." In one video I made of two persons seemingly possessed by shadow demons walking along the sidewalk in front of my house at night looked like shadow demons and walked at about 15 mph, a normal pace for such demons, right until they stepped into range of my floodlight in the driveway, at which point they instantly slowed down to a pace normal for humans; then, they just as quickly resume their usual appearance, whereas, while in shadow, they looked like shadow demons (e.g., darker than the shadows around them, and a flat, 2-D appearance like a real shadow, but standing upright—not on the ground).


NOTE | To see what a shadow demon looks like, go to VIDEO | Shadow demon revealed by inability to cast beer bottle's shadow.

In VIDEO | Neighbors and shadow demons prowl, fight late night, neighbors congregating in their yard late at night were alternating between their shadow demon halves and their regular form as they walked in and out of the shadow cast by their house.

As is typical of all media showing demonic possession, this video shows a concentration of chroma on my hands and head—the only two body parts to show a transformation. That is also typical of media showing demonic possession, in that, if you look back at all the photos and videos I've made of such, the head and hands are the first two body parts to morph into their demon-half, and are usually the only body parts to do so [see PHOTOS | Underlying demon revealed in video in motion; see also The most comprehensive collection of demon possession media ever]: 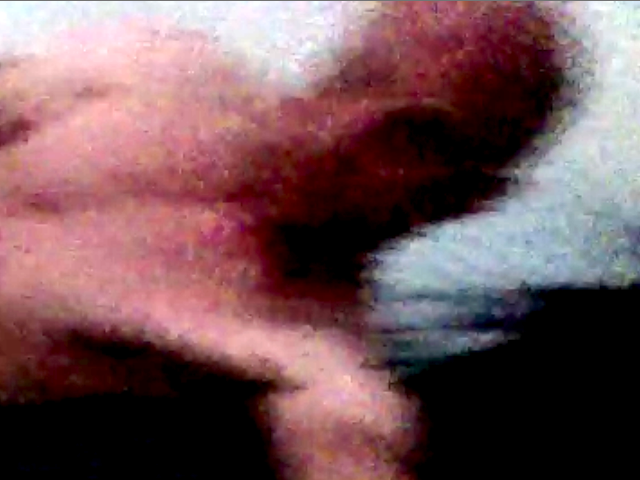