I call it a zap, while the Voices Demons call it flicking a booger; but, no matter what it's actually called, it amounts to this: a tiny ball of glowing energy, shot from my own hand, which, on impact with its target, bursts into a tiny, whitish-yellow micro-dot of an explosion about the size of a pencil lead; and, the result: on a demon-possessed person, a very angry, (sometimes) dispossessed demon. In fact, a demon so accosted will literally leap out of the person and head directly for me, but that's another story for another post.


NOTE | A zap from my fingers is not to be confused with what I long ago called a zap from a demon's fingers in SCIENCE | Why some demons wear clothes; why others go naked.

This post focuses solely on what the finger flick and the resultant glowing dot look like using a video made just an hour ago. The following images show you where to look for the dot (click to enlarge). In the first column is the frame right before the finger flick; the second column, right after. The second column images show the tiny, glowing dot; the first column, of course, does not:

In the video, the clip showing the glowing dot is replayed several times, which have enhancements applied to it; the original, unaltered clip is played at the beginning. In one replayed clip, playback is paused for better viewing; it is following by a zoomed version, for the same reason:


This isn't the first time I've indicated my ability in this regard. In ASTROLOGY | 'Planetary hour' determines flow and strength of demonic power in humans, I wrote:


As each fight raged on, I would note the relative strength of demon peoples' power next to the opposing power (which is sort of like an exorcist-type power, in that usually one hit to a person knocks the demon right out them; you can actually see it rise from the top of their heads).

At the time, I intended to be vague. I never specifically described the opposing power or ascribed it to me because, as a general rule, I rarely post information about demonic activity I cannot show in photos or videos—and, even then, only if there are at least two pieces of media evidence made at two different places at two different times (this case being the exception due to the rarity of capturing the dot so clearly in a video).

Planetary hour linked to strength, availability of demon-fighting power
According to the video file metadata, the zap was recorded at 10:23 PM, the exact time the planetary hour passed from Mercury to the Moon in Greenwood, Indiana [see ASTROLOGY | 'Planetary hour' determines flow and strength of demonic power in humans]. Neither the Mercury nor the Moon planetary hours are optimal for zapping; in fact, they weren't working at all right before the transition, and did not work again afterwards, either.


NOTE | During periods of high demonic activity, certain types of demonic activity and weapons use are compared to the planetary hour at the time they are observed. A pattern was established long ago, and has never failed to be 100% consistent, with no exceptions.

Power not found in demon people
Demon people do not possess the ability to zap. It is likely because a zap doesn't do just one thing; it's contextual. Depending on when you use it, how you use it, where you use, and why you use it, it will do a different thing—none of them being simple variants of the other (rather, wildly different things). Although demon people have a wider array of demonic weapons at their disposal, they are all pretty much the same energy simply repackaged over-and-again for various reasons and purposes.

By contrast, I now possess both, as shown in PIC/VIDEO | Close-up of tendril-firing demonic hand weapon key for finding possession victims:


Update: out-of-loopers difficult to convince
In spite of over 700 posts of unerringly convincing proof of demonic activity (not that this is a blog about proof—it's just my personal note collection that I share), paranormal enthusiasts who are members of Facebook pages where I am the newcomer are difficult to persuade.

That's not my goal; I'm just saying, is all. I mean, if you claim to want proof of paranormal and/or demonic activity, you have to be willing to make an effort.

On my blog, hardly any effort is required. There is material in abundance, right at your fingertips.

I think that, at first, people in these groups see themselves as beauty pageant judges of a kind, and nothing more—at least not anything like the kind of problem-solver that's needed to address the demonic plague. I say, give these people irrefutable evidence by dropping a demon right on their heads, and they'd find something to criticize ("Why, that's not a demon; that's an evil spirit! There's a difference, you know..."). Not one of them is actually ready to accept the very thing they purport to seek. Sort of like some Christians I know. And, not one of them actually sees themselves as handling a problem with paranormal aspects. They want to be entertained, and you better damn well put on a show: 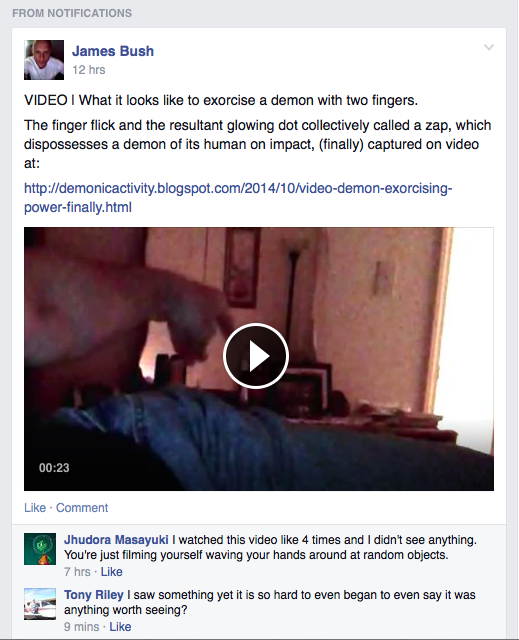 To that end, I have the following suggestions for persons with problems similar to the ones I just mentioned:


NOTE | I generally don't rant on my blog for three reasons: 1) my audience is a wide variety of sentient life, and addressing issues like this makes people, i.e., humans, look really, really stupid (you'd understand if you were me, a member of the only race that is kept in the dark, and who is trying to look otherwise); and 2) this blog is not for the public, it's for people with a penchant for the scientific. There's no customer service department, and you're not a customer; and, 3) it makes me look like I have time for things like this—like the problem is only when I perceive it, and not a truly pressing one. Nevertheless, the four pointers above needed to made to everyone, scientific or not.

A further update: demon peoples' jealousy unveiled
Another reason why I don't usually rant on my blog is because people—real people—aren't stupid or blind. I can always assume that only a demon person would object to the clearly presented, top-notch posts to this blog in the way as shown above.

It's jealousy. They thought their power would make them the stars of the show; but, the blog revealed them for who (or what) they are. Here's a peek at that jealousy: 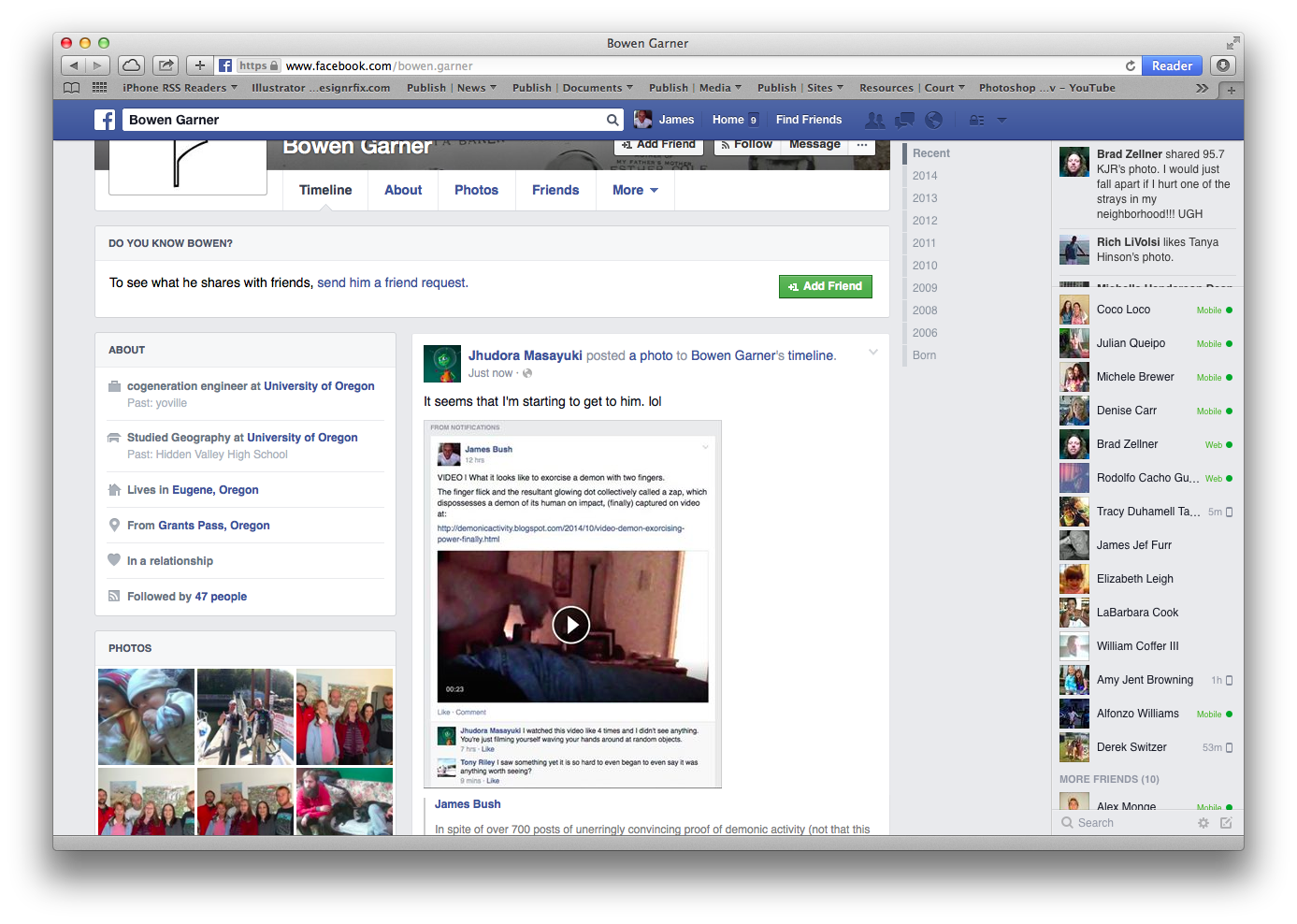 This was obviously not meant for me; but, God is on my side in one respect: that this ilk should get away with very little.

Here's my (and others') responses so far, including that of the poster who criticized my posts in order to "get to [me]":

Monthly performance stats
A little number-crunching helps balance the picture when things like the aforementioned goes down, and thanks to Google Analytics, that's easy to do.

According to this amazing Google product: Over the past month, I doubled the length of time I kept users on my blog and the number of pages they viewed while there; moreover, I halved the number of users that leave the site after viewing only one page:


There was also a 25% conversion rate from new user-to-returning user, month-over-month (1 out of 4 new users became returning users).

Oh, I'm the stalker now...
"It seems this James Bush guy is stalking us." Check out this Facebook Timeline post and the Messenger window: 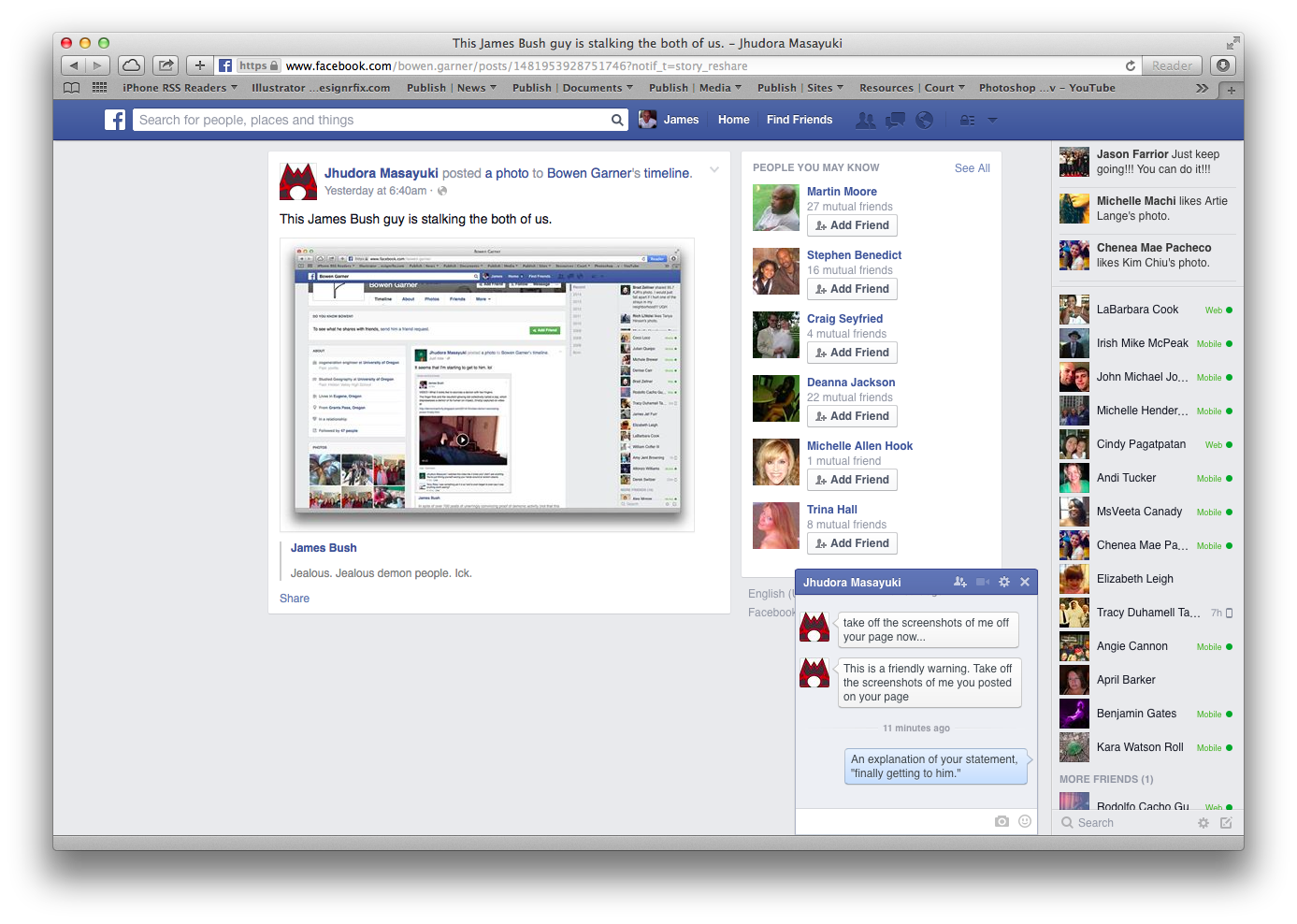 Can you spell panic at having been caught with your pants down or what? Well, I can; but, anyway, here's demon-people backup tactics at work, i.e., turning the blame around in the most incomprehensibly illogical way possible. They think it's funny, actually: 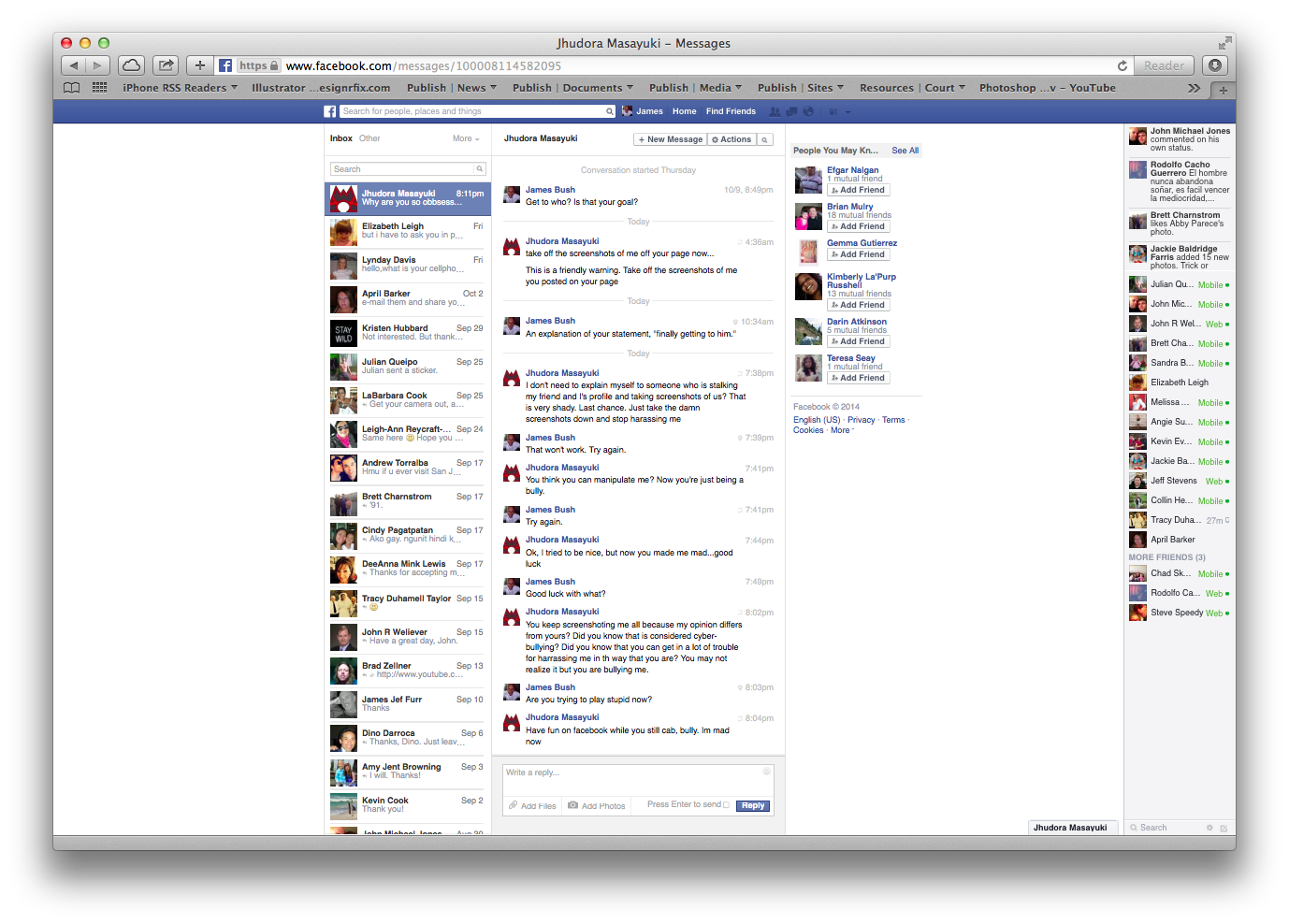 The best approach I've found after dealing with people like this for so long is to never give them what they want—no matter what. They think they're powerful, and can have everything. So, you simply show them otherwise.


NOTE | For the record, I never contacted this guy ever. No one is stalking him. The only thing I've done is answer his messages and questions, and only posed one question to him, and that was to explain a post he put into the public eye.

"Get to [me]" plot not new to demons and their people
Why is this guy not seeing how things really happened? Why is he not answering the question that started the whole thing for him?

This morning, I got this comment from him to my post [see below] that described his plot to "get to [me]": 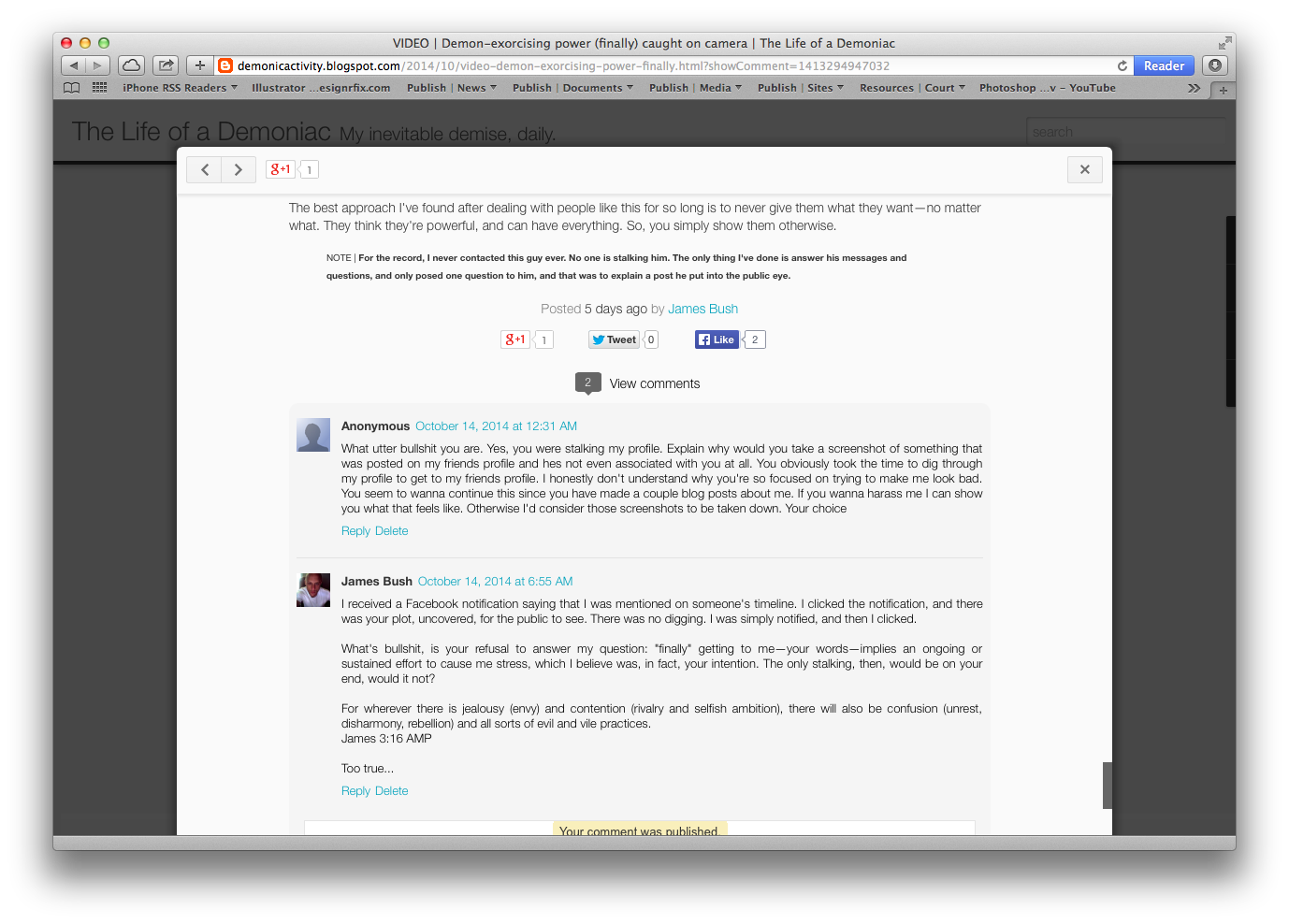 This is a plot explicitly stated and laid out years ago by people like him: