In this great example of demon animated street art from a video made during the most recent demon-led Anger Management Ritual, a demon blends with a nearby fire hydrant, appearing as a green-headed, white robed figure.

If you watch the high-quality, double-sized version of the video, you will see the tail lights of a faraway vehicle(?) form its head, which, when placed on the neck of the demon/fire hydrant, looks down at the sidewalk before its shoots straight off along the horizon, and then off of the screen.

Following is a preview:
The preview above is not really sufficient to see what I just described; you must download the enlarged original from MediaFire at:

Later in the video, the demon's head is replaced by another one made of car tail lights, and, this time, looks down on the sidewalk on the other side.
By James Alan Bush at 8/06/2012 03:32:00 PM No comments:

During the most recent Anger Management Ritual, the demon-led campaign of harassment and terror perpetrated by human collaborators—albeit with demonic leadership and assistance—a spot-check on Scratchen's welfare, which is constantly threatened by the Voices Demons, revealed a large Spectre of Death-like demon guarding the entrance to the apartment building she lives in right now:
In the video, it slowly fades into view as the car pulls up to the entrance:
While most people would probably stay in the car, all I can say is that Scratchen is my baby girl: 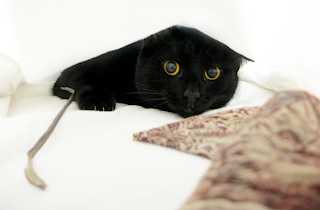 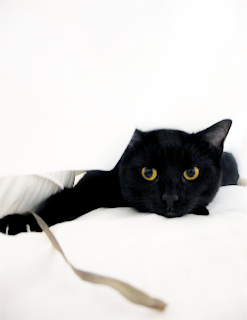 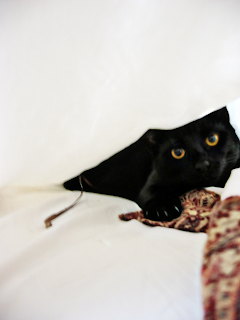 The actual Spectre of Death can be seen in several video on this blog, with the greatest similarity between this newly recorded demon and said Spectre:
The Spectre of Death also held a meeting of demons in my entry hall last year, and looks similar to the new door-blocking demon:
The very first video shows the only the cloak of the Spectre of Death, as it flies into my apartment to disable a cellphone video camera being used for nighttime surveillance at my apartment:

More tree art, but this time you have to watch the stills in which it can be seen one-after-the-other (i.e., cartoon flip book style) to see a demon-borne tree monster leap from the side of the video and grab at my USB cable, which was connected to my phone, and hanging in front of the camera lens:
This is not the first time a demon or something-or-other was caught on video grabbing my USB cable; the same miniature hobgoblin demon shown in VIDEO TIMELINE | Miniature Demon Pulls and Shakes Pillow briefly pulls on it in VIDEO | Hobgoblin Demon who shook pillow shakes cord, as well.
By James Alan Bush at 8/06/2012 02:20:00 PM No comments:

During the latest "Anger Management Ritual," I found myself face-to-face with a tree sculpted by demons to look like a skull, which I did not even notice until I began recording scenes from the area I was standing in with my video camera filter set to sepia color mode:
As it turns out, the demon-highlighting sepia color mode filter was not needed, nor was the usual requirement of camera-waving and still-frame culling, as was necessary in PHOTOS | Tree-shaping trend grows more sophisticated. You can see the skull in full color while keeping the camera motionless (and with the naked eye):
Here is the video in which I first noticed the skull:
And, for authenticity verification purposes, here is a full color version:
By James Alan Bush at 8/06/2012 02:10:00 PM No comments:

PLACES | Houses I lived in and sustained recurring demonic attacks

These are some of the places in which demonic attacks occurred (or still occur) on a regular basis:

I lived other places; but, these are the residences with the most demonic activity.


COMING UP | Businesses and other peoples' residences where demonic activity occurs regularly.

By mere coincidence, my laptop video camera got a fairly clear shot of a spiked instrument of torture used by the Voices Demons to inflict sharp and sudden pain in my neck and shoulders, which was used repeatedly on me yesterday, day two of the around-the-clock Anger Management Ritual:
The speed at which it is moved is usually much too fast to capture on video, which is evident by the fact that there is only one still frame with a clear shot:
It is also likely to be cloaked, which means that it can only be seen on video if the camera and the instrument are in opposing motions. This is the only way that hobgoblin demons are detected on video, as described in What does a hobgoblin demon look like.

Where did it come from? Demons of the elongated, sucker-demon type simply transport to whatever location you are via human collaborators—either in their ears, noses, mouths, anuses, or armpits.


NOTE | For more on where sucker demons are put in people in Demons put "eye spiders" in eye sockets, nose and ears—and worse). To learn how people transport sucker demons and the like to their victims, read Sucker Demons Fly, Ride in Backpacks and watch VIDEO TIMELINE | Oliver Conceals a Sucker Demon.

They then slink to the ground, slither to a hiding spot, and then attack from their position.

A still frame taken from an older video made at my old apartment at 471 East Julian Street in San Jose, California, shows that other devices have been used against me:
I do not know what the device does; but, it's safe to assume it's not intended for my health and well-being.


COMING UP | Demons use electronic devices that cause fear on children during "nightmare" sessions.

During yesterday's two-day long "Anger Management Ritual," the Voices Demons sent hordes of sucker demons (the dust-broom/mophead variety), purportedly, to atrophy muscles in my neck, shoulders, arms and buttocks and legs, as has happened without explanation. These sucker demons are generally cloaked and, therefore, cannot be recorded on video, although I do have one video showing the faint outline of a cloaked sucker demon sliding down the back of my neck, as well as one traveling underneath my skin and in my eye sockets. Poor camera equipment further complicates the task of acquiring good images.

Even still, I was able to catch one traveling down my neck and onto my trapezius while under my shirt yesterday, mainly, because this particular sucker demon was uncloaked at the time, which means that the interference that emits from their cloak, which distorts images made by digital cameras, was not present; moreover, there was plenty of light, whereas I usually encounter these creatures at night, in my home.
You can see part of a de-cloaked sucker demon sitting on my left trapezius:

Prior to this type of assault, a Voices Demons will always announce aloud to an audience I cannot see (but, can hear, if speaking), "Take his muscle mass away!" Following that, some kind of creature,  similar to the one shown above—and, usually more than one—climbs onto my body. This one feels like I have lint under my shirt that is crawling around. This attack is sustained in 24-hour increments, while both demons and their human collaborators taunt and threaten around-the-clock. Today marks the third such day in a row that both have occurred.