It must be close, then, because they have been putting their hands in and on me all day and night—sometimes waking me up with an electric jolt that sends my limbs flying.

As we speak, I am barely able to see the screen, or concentrate long enough to type a complete sentence.

I have a video of an invisible hand warping the side of my head as one of them touches my eye from behind. It looks like the light behind me is bending the shape; but, the contrast between the portion of the video in which I am being touched and when I am not is too great to attribute to anything but what it is.
By James Alan Bush at 3/13/2012 10:57:00 PM No comments: 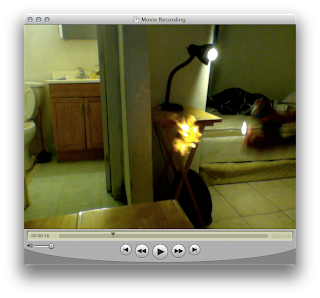 Threats received in the middle of the night:

From the Voices Demon that sounds like Jason Fisher (and has claimed to really be Ray Feldmeier): "We will hurt you bad, man."

From Boopsie, the Voices Demon in the upper register: "We will hurt your cat (pictured, below), if you don't tell us how to help you."

They have been ratcheting up their "game," as they call it, more and more as I get closer to a key milestone in a very important lawsuit, which happens to involve a significant number of their people (see http://www.scribd.com/theoknock). 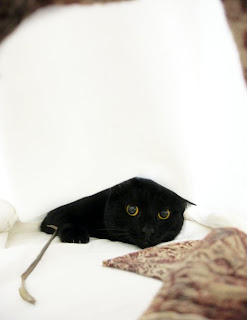 Earlier this year, during one of their many episodic displays of terror, the demons trotted out an old childhood demon that calls itself, "Beatrix."

The significance was supposed to be that they were a party to the demonic terrors I experienced from ages 5 through 8 (which I had thought were nightmares), whereas before they constantly "reminded" me since they arrived (or, rather, rearrived) wnearly six years ago that they came because I was "not a good Person."

Obviously, that won't work now; but, once they belatedly realized that they effectively admitted to terrorizing a child--and that they are quite experienced at it--they refused any and all questions I had regarding this.

Naturally, I wanted to know why they didn't tell me before then. That wouldn't be most people's first question; but, they spent (and spend) most of the 24 hours a day they "punish" me telling me the "reasons" I deserve it, and those reasons would never apply to a five year old.

But, putting the insane rationale of demonic thinking aside, the most logical question I could pose is to myself and others is, "How do we defend ourselves against them?"

After all, I don't care about a demon's reasons for doing anything: they, and their human (and other) counterparts are Satanic filth, and that is my reason for taking them on.

And, now, it would seem I have a second reason: all my childhood fears, and any effects lingering into my adulthood, were likely caused by these vermin, who obviously regard people, including children, as their enemy.

Still, I consider one of the luckiest of all their victims. I have witnessed their interactions and relationships with a multitude of people, many of whom do not see the way they are being molded by evil.

For example, many persons in touch with these demons receive gifts or some other benefit from them, including what appear to be magic-like abilities; the catch is that such persons become "indebted" to those demons.

At this point, the demons will ask for favors, which invariably profits any given evil agenda they may serve. Favors range from providing bad customer service to a particular person, and even raping them (which has happened three times to me by their hand since their reemergence at age 32).

And, those same people have been undistributed by these demons to believe that what they did was right, for those that need justification (not everyone does, obviously--who should be raped?).

Going forward, I intend to introduce such indebted persons on this blog. I'll describe what they were given, or threatened with, or how they were otherwise compelled to do what they did or were asked to do for demons.

But, for now, I'll just be thankful that I am under no illusions as to what they are, and what they do, even if I am being hurt, instead of receiving "powers" or gifts, or, in some cases, information or the withholding thereof (usu. related to crime).
By James Alan Bush at 3/13/2012 04:17:00 AM No comments: Links to this post