Clicks, pops and squeaks in videos are actually demon chatter

Demons not only come in miniature sizes, but from places with very different environments, where, for example, air pressure and its chemical makeup may require a different way of projecting sound than we are used to (think dolphins and whales).

In this original recording of the Voices Demons conversing with humans somewhere in my apartment (the attic?), you can hear a rustling sound that sounds like my hand moving across the trackpad on my MacBook Air; but, when played at a slowed rate, lowered pitch, amplified and cleaned of some of the background noise, it reveals much more than a squeak:

The demon repeats the same remark made in the recording of a secret conversation, in which Danny Napolitan says, "Fucking fag!" It is also repeated in another recording on this blog and in Noise Harassment on Vimeo.

Demons: 'We own this town'

The Voices Demons reminded me today—as they do quite often—that they "own this town," namely, San Jose, and that, by using their alleged connections to the Bay Area police agencies, I would be brought back immediately if I ever tried to "escape."


NOTE | Certain police officers have indicated their involvement with—or at least their awareness of—Voices Demons and the like by using demonic vernacular (see [link]), which is the way all humans indicate their complicity with the demonic agenda to intimidate a demons' target.

Now that they are overtly and routinely violent, they must have felt it necessary to broach the topic yet again. Just before then, they moved a toilet sitting outside my former landlord's house into my path while I was carrying a moving box (see Demons can and do move walls to cause injury). The result was a lot of pain, as well as a scrape with swelling on the lower part of my right knee—one of the Voices Demons most often targeted part of my body:

Aside from the obvious implications, such as corruption and kidnapping, their warning also implies that the demons now tormenting me day and night cannot, or will not, travel beyond the boundaries of the Bay Area.

The reach of a Voices Demon was first discussed in Characteristics of the voice of a Voices Demon. Nothing in this latest threat suggests that the limited-range theory presented in that blog post is incorrect, which is that a person harassed by Voices Demon can distance themselves far enough from a Voices Demon to break the connection. I have already determined this for myself.

But, it's not just their connections they could use; in my case, it's simply a matter of law that would apply to any law enforcement agency in any state without the complication of certain questions.

In April 2006, I was arrested for presenting a stolen check to a bank, which simply did not happen, and which was set up by the Voices Demons themselves (hear the secret recording of a conversation of two persons discussing the demons' plan to incarcerate me for life in prison or a mental institution, even before any crime was alleged to have been committed by me, ever). Back then, in my ignorance and inexperience (not that any knowledge would have mattered), and based on the way things were going and were likely to continue going (see Gang-stalkers warned of upcoming violence, death), I pled no contest in a plea deal to avoid a costly trial and prison time—or worse, as defense attorney Kenneth Pinto warned me at the time that I "wouldn't last an hour in prison."

The plea deal specified five years of formal probation, which severely restricts the distance I can travel, and all-too-conveniently keeps me in range of the Voices Demons that not-so-coincidentally appeared just before I was arrested for the first time in my life. If I left the Bay Area—and the range of the Voices Demons—criminal proceedings could be instituted that would empower any law enforcement agency in any state to extradite me back to California if they found me.

This is not an uncommon occurrence in the Bay Area. In fact, it's a widely known tactic for keeping someone within the Voices Demons' "sphere of influence," particularly in the gay community, where not only is it relatively easy to find persons in the criminal justice system biased enough to bend rules or break laws or otherwise exercise their discretion against a person, but is safe to assume that familial and other social connections to that person are weak at best. A plague of riffraff in all sectors of every industry helps, too (I'm pointing to the bank teller and the "victim" here).

Color banding is the most common problem in videos exported by iMovie '11 to video-sharing web sites, such YouTube, Facebook and Vimeo, using its Share feature; this also applies to iMovie '11 video exported with Quicktime using the H.264 compression type. It appears as thick bands of color instead of a smooth, tapering gradient in portions of an image where light recedes into shadow or when one color blends into another.

Unfortunately, the most commonly used compression type for video on the web that iMovie '11 supports is H.264 (or MPEG-4). This may seem odd for anyone who knows that web videos exported by iMovie purportedly use the same Quicktime rendering engine used by Quicktime Player X to export desktop movies; even still, web movies exported by iMovie '11 look as if the color-bit depth was reduced from millions of colors to thousands.

You can eliminate color-banding by exporting your iMovie '11 video using one of the higher quality compression type Quicktime offers, namely, Apple ProRes 422; however, the size of the exported movie will probably exceed the limitations imposed by most video-sharing sites, including YouTube, Vimeo and Facebook—sites to which iMovie '11 provides direct uploads. Even without this limitation, the lengthy download times will likely frustrate your online audience. 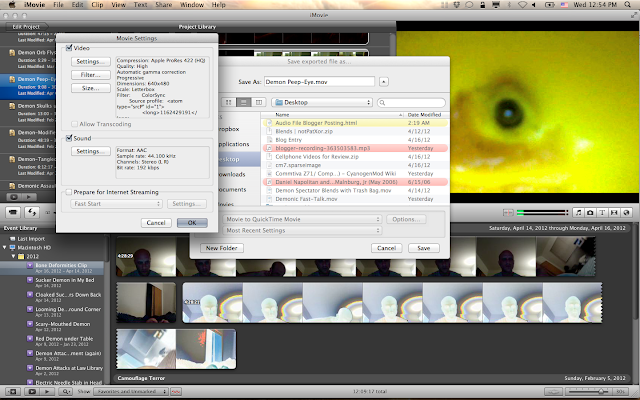 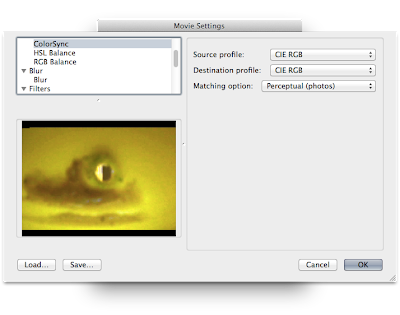 
NOTE | One reader, namely, kiplanttnoreply@blogger.com, had the following suggestion: As explained by Carlos Gonzalez, here is how to install the ProRes codec and others: "The problem is iMovie and Quicktime default codecs, probably the AIC (Apple Intermediate Codec) and iMovie itself, which export to 8-bit format only. You can get the ProApps QuickTime Codecs v1.0.1 from Apple. To get the codecs from this package, download and use the free app unplug, and then copy them to Macintosh HD -> Library -> QuickTime to see a radical difference.