In addition to burning my left eye, as discussed in Demons Burn Left Eye as Previously Threatened, the demons and their human counterparts have inflicted several other injuries lately.

Prior to the demons' involvement in my life, I never had any serious injuries of any kind, let alone from violence; however, since 2006, however, when the demons first announced their arrival (for the second time since age 5), I've had three broken bones, four lacerations, and once was electrocuted, just to name a few.

And, what's even more disturbing than going from no serious injuries to so many—over 30 in less than 5 years, to be exact—is that most of them were sustained by violent demonic acts.

Following are a few of the injuries sustained by and through various incidences of violence within the past several months (the Taser prong photos are from 2008): 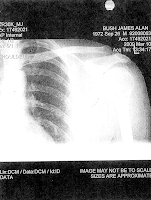 These injuries are in addition to those not shown here, and those that are virtually undetectable until they have accumulated to something that can be detected. This includes, but is not limited to, multiple poisonings and frequent penetration into bone, muscle tissue and nerves by the needle-like appendages of various entities.

It is unknown if the electric-like shocks that emanate from demons, which I experience frequently, have any cumulative or adverse effects; it is also unknown whether touching any given demonic entity is harmful in any way. When I touch eye spider-variants, in order to remove them from me or my bed or clothes, they feel like fuzz that pushes back a little. When they are torn or crushed, they make a popping or cracking sound. Only dust is left behind; but, unlike dust I know, this dust evaporates. You can feel it between your fingers for a few seconds, but then it feels just a little wet before disappearing.

There are also overwhelmingly powerful smells that precede and accompany certain demons. I've had breathing problems and dizziness with it before. It makes me tired, too; but, I'm not sure if that means it's harming me or not. I do know that there are many people in San Jose who spend considerable time with these demons that do not necessarily consider them an enemy. That, of course, does not mean a demon is being mindful of the effect its presence has on such persons, though.
By James Alan Bush at 4/13/2012 10:48:00 AM No comments: Links to this post