#434 - Voices Demons take a second and third swipe at freedom

The Voices Demons, which vowed to incarcerate me falsely just three days ago, took a second and third swipe today at my freedom. In Voices Demons' rumor mill at work, these nefarious demons discussed with other demons—as well as Bay Area citizens—their intent to incarcerate me; and, less than one day later, they made their first attempt, as described in Voices Demons make good on yesterday's threat.

The exact wording of the intent of at least one of the Voices Demons was:

This morning, I found out that a pawn of her own horde of Voices Demons, my probation officer, had intended to ask the D.A. to incarcerate me at my next court hearing for a violation of probation; just like from AUDIO | Voices demons harass visitor to my apartment, she is also harassed by these insidious and foul creatures, and had apparently been cajoled into helping them incarcerate me.

NOTE | Once, after leaving her office, I heard at least 5 Voices Demons screaming in unison, in the most shrill voices I've ever heard. I'm assuming she didn't do as they had asked in her meeting with me that day.

It appears, however, that this issue has been resolved in my favor; however, on my way home, I was stopped by a deputy of the Santa Clara County Sheriff's Office and cited for crossing against the light. 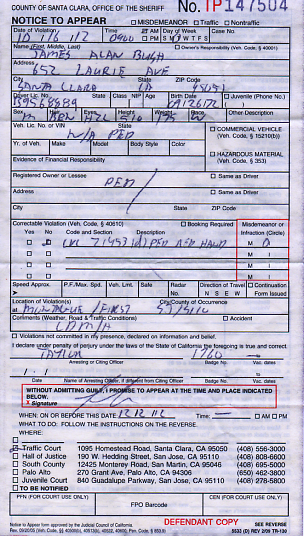 I intend to fight this in court, as this alleged violation of law was not even witnessed by him; rather, it was reported by a demon-allied VTA light rail operator, who are all blatantly and unabashedly allied with demons, specifically, Voices Demons.

This particular alliance is crucial for demons, as the very first thing demons do to their human victims is deprive them of their mobility, i.e., steal or wreck or repossess their vehicles. This forces them not only to stay within a general (and manageable) area, but also pushes them into the demon territory that is public transportation. There, employees operating buses and trains and the like are used to make false implications against victims in order to progress the agenda of demons.

Sounds weird, and is weird; but, it's true. It's simply how demons do it, and how it works.

In my case, the light rail operator told the sheriff's office that I was walking along the tracks, and that I had crossed the street into oncoming traffic. Simply not true. Had the officer believed the light rail operator's story, I would be in jail right now, facing at least two misdemeanors for railroad-related violations, including trespassing, and one felony count for a violation of probation. Given the trend in sentencing structures lately, that would be at least one month in jail.

This is not the first time someone has lied in an attempt to incarcerate me, as described in these posts:

The number of attempts to deprive me of my freedom in such a short amount of time makes it clear that the Voices Demons are in a panic about something. Their reputation notwithstanding, I believe that it is directly attributable to the pending suits against several of their human collaborators, which I am all but assured to win.

NOTE | Read Voices demons say, "They'll offer you 105 (years) to life [in prison]" for the most comprehensive background and summary on the Voices Demons' intent to incarcerate me.

UPDATE | A regularly scheduled follow-up hearing went smoothly yesterday; the judge was pleased with the reports he received from probation, the treatment program in which I am enrolled, and the fact that I tested clean on my last round of drug tests. I walked out of court a free man, and to applause by the judge and the audience in the courtroom. The demons, and, in particular, the Voices Demons, have been near silent and non-visible since, although their connection remains.

#433 - TECHNOLOGY | Highlighting demons possessing a human as shown on video

These instructions show you how to use GIMP to highlight demons that are possessing you, which are sometimes revealed in video shot in partial darkness. A real-world example is used, particularly, a still frame from a video shot of me in the dark about a week ago:

The above is a demon possessing me at a time when a hyperdimensional portal was opened in my apartment.


NOTE | To see what a room looks like when a hyperdimensional portal opens into it in the daylight, see VIDEO | A room in which a portal from Hell opened.

Why can I see the demon's face, but not yours?
The demon is both reflecting light and emanating it at the same time. Polarized light combined with reflected light is more light, and makes the demon's face more visible than my face, in that my face is only reflecting light. This was more fully explained in SCIENCE | The ethereal glow and semi-transparency of cloaked demons explained.

Following is a portion of the video the still frame used in the example (below) was taken from, including both the original and a slightly "enhanced" version:

Instructions
The result is the chroma mask of a demon in possession of a human, as captured on video:
Following is the video from which the above still frame was taken: 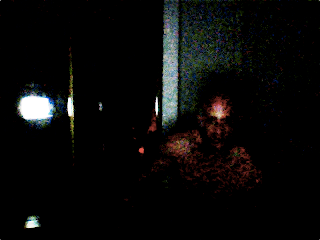 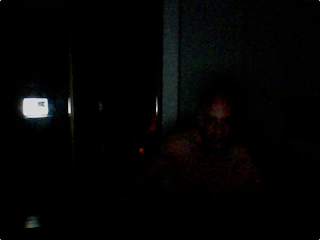