He's wearing the same clothes I've worn any number of times since the (overt) attack by demons and their people, the very same clothes I wore four out of the past six years, and the clothes they continue to vow I will wear again in the near future—that is to say, jail clothes [see Voices Demons' weigh options to deprive me of freedom].


NOTE | To that end, they are inducing sleepless nights and perilous days via the kind of attacks well-described and shown throughout this blog; but, not only am I'm holding up [see BIBLE | Fighting the Good Fight: How a demoniac fights like a Christian], but I'm continuing to make progress in my efforts to stunt and otherwise quell their agenda of evil [see The Death Wish of a Demoniac: Fighting the demon-allied drug trade].

The following video shows the stalker entering the courtroom of Judge Paul S. Grewal for his bail hearing:


The video also shows another victim seated in the courtroom next to the FBI agent who arrested the stalker; but, that victim is not the same one who originally filed the complaint for stalking with the FBI [see Victim of same cyberstalker suggests joint complaint to FBI:
I'm loathe to make assumptions but, clearly, the stalker has/had the same agenda as those shown in AUDIO | Homeless shelter staff fag-bashes via loudspeaker, in which "fags are being targeted for expulsion from society," as the Voices Demons put it.

I find it ironic, then, that he is wearing brown, the color assigned to inmates who have requested to be housed in protective custody, where homosexuals are automatically housed in order to keep them safer than they would otherwise be in the general population of prisoners.

The arrest of the stalker is detailed in FBI arrests stalker, detention hearing in federal court next Monday, and the links therein describe his history as it pertains to his crimes against me and others.


Just prior to the hearing, I received this e-mail from my grandmother, who apparently reads this blog: 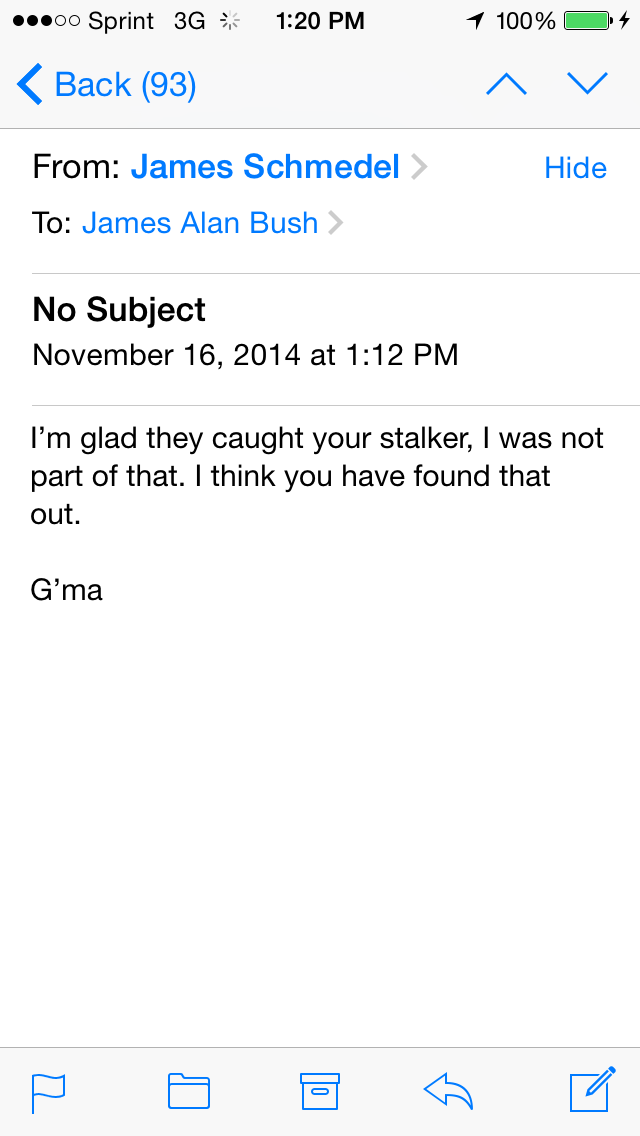 The arrest suggests no such thing, as I've made clear in Voices Demons: "Your family will be arrestable".