Back home again in Indiana

My day today was supposed to look like it has every other day for the past month and a half (or so):

Primarily, it would have consisted of wiping and mopping and washing and scrubbing at the homeless shelter where I also live. And, like many, many of the other days I spent at Little Orchard, I would have been doing so in a literal minefield, where even the restroom could result in bombardment in the form of multiple blows to the head, neck and shoulders from demonic bombs planted inside the stalls [see PICS | Demonic "bombs" define territory and confinement areas].

Instead, I'm at SFO airport, waiting to board a flight to my home state of Indiana:

NOTE | My last trip to Indiana was in November 2012, and is recounted in Voices Demons harass, threaten United Flight #44 passengers, pilot [search for Indiana].

It was a spur of the moment decision; but, it seems like the right thing to do. Mistakes were being made that people can never walk away from—mistakes like these, which are just but a few of the many, over just but a small amount of a much larger portion of time:
It would be cruel to let them continue, unhindered, and a little distance might do just that. After all, who would want to be responsible for having done this to someone in only a few months' time:

And yet, they are responsible for what you see in the pics above, and would have done much worse had I stayed in California much longer (in fact, much worse, as so threatened in Cyberstalker advises pending death].

Still, I have no regrets about acquiring as much data as I have on the demonic plague in the Bay Area of Northern California; moreover, I look forward to organizing and disseminating it while in Indiana, in spite of the future consequences, as I consider the future reward well worth the trouble:

The only regret I do have, of course, is not being able to save my little family. Long has swayed with the crowd, although he is still a tremendous blessing to me; but, Scratchen remains in danger. Just yesterday, they threatened to "hurt her little head," whatever that means specifically.

Getting on an airplane and leaving those two behind is agonizing. It feels wrong to the point of being sinful; but, I'm no good to them dead, and I continue to work on the problem in earnest, as will be evident in further posts to this site. That, plus prayer—...man and beast you save, O Lord [Psalm 36:4c]—is the best I can do for them for now, for what it's worth (perseverance, as I have deftly demonstrated throughout the years based on the number of posts and what it took to write them, is sure evidence of my sincerity).


Here's a reader comment in re the photo of Scratchen, above: 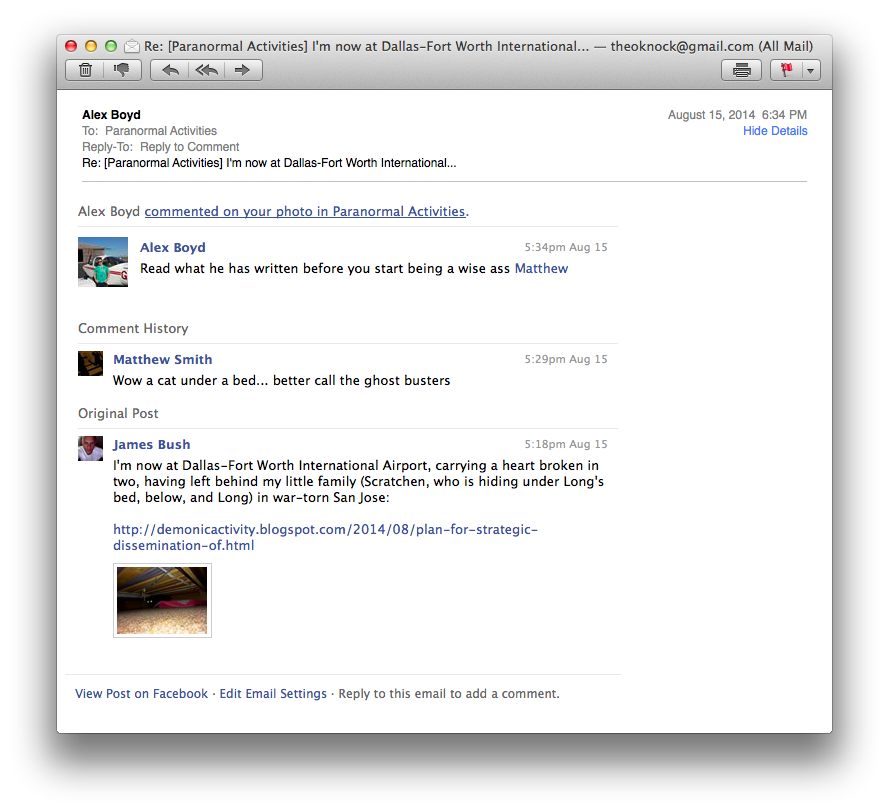 The follow-up response by Alex Boyd is absolutely right; you have to follow the story before you read any other post. This blog is like a soap opera; you can't just jump in and get everything that's going on in one episode.

I'd also remind readers to get and be in the right frame of mind before reading any portion of this blog, a method for which can be learned in BIBLE | The Word on demons.

Update at 10:12 PM, Indiana time
Upon my arrival to Indianapolis, my mom and I went straight from the airport to McDonald's—the first business name I could pronounce as a child, and my favorite restaurant ever since:

And, quite frankly, my favorite eating partner, too (ever since).