I want one of my last acts on Earth to be pleasing to God, something I've been thinking about since my last battle with demons, which has left me in extreme pain and barely able to function [see PHOTOS | People—not just demons—taking part in repeated spikes to the brain, head, neck and vital organs].

Helping a church stand up to the gates of Hell is what I've decided on.

Before my grandmother was killed by demons and replaced by the unfeeling, heartless mocker you hear and read about in CRIME | Bogus attorney freezes mother's, crippled 8-year-old nephew's bank accounts, she left me with the best advice anyone could give another person in a problem like mine and like the entire Bay Area of Northern California's:

It sounds like a simple thing to say to someone engaged in battle with the Army of Darkness; after all, how is that going to stop the Spectre of Death from killing me? He can pierce his bony claws right through that Bible I'm holding, and then through my heart, in a matter of less than a second.

Still, though, I can't argue with the fact that I'm not dead yet, and I can't say for sure that going to church didn't help. After all, I couldn't count the number of times the Spectre of Death has failed to kill me, he's tried so many times. And, even if I could, that number would pale in comparison to similiar attempts by many, many other demons [see ESPAÑOL | Demonios ardientes con el fuego]. 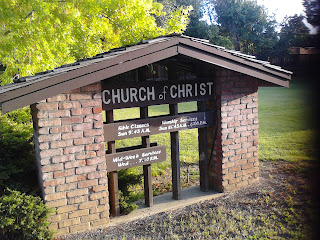 It's safe to say, then, that Godly wisdom and heartfelt prayer on my behalf, all of which are benefits of church attendance, are likely responsible for the protection I receive, and which comes only from the mighty hand of God.

I believe that fearing God brings protection like that. And, what is fearing God? It is the practice of true religion; and, that practice means regular church attendance, and spreading the Gospel.

To keep a good thing going, I decided to help a little church in Mountain View—the very one my grandmother meant for me to attend when she told me to go to church. They need help. Bad. At least, according to preacher Richard Watkins. 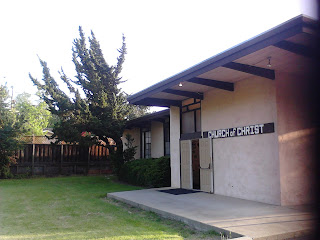 His congregation has been ravaged by demons. Once filled to capacity, the Miramonte Avenue Church of Christ is down to but a few. They are absolutely no stranger to the demons that haunt the valley, and they are every bit a victim of demonic activity as I am.

I can personally vouch for them, too. I have sat through several Sunday morning services during which demons have perched outside the windows of their church building, howling and knocking and prowling, while the poor souls inside did their level best to pretend they could hear and could see nothing, as they were warned to do by the Voices Demons themselves.

After having lunch with Brother Watkins several weeks ago, they have championed me to their cause: to ensure they are not forgotten as the Light to the Valley they've always wanted to be. Using me (of all persons), they are reaching out to to the world, specifically, to victims of demonic activity everywhere, as people who have met the Devil face-to-face, and not just as people who have simply tasted his wares at the subtle level most people in the world have. They are reaching out to say that they are still alive, they are conducting services, and they are every bit the disciples of Christ they ever were, Satan be damned.
Accordingly, I'm starting by sharing four of Richard Watkin's hand-picked sermons. These are how a preacher from the Church of Christ preaches while standing on the edge of the fires of Hell itself:
These sermons are everything they should be, in that, no matter what was going on outside the building, they remain scriptual, simple, apt and relevant.

Listen to them, and, send your questions and comments about these sermons to preacherrichard_watkins@yahoo.com; and, as always, words of encouragement are welcome, too.

The Bible on this blog
See these other posts about the Word of God and the Bible as it pertains to demonic activity and this blog [search for 'bible' on this blog]: