Taking advantage of tonight's heavy cloud of chroma permeating the air during this latest period of high demonic activity (three days in the making now), I prepared a video showing evidence of EMF radiation emissions from my zaps, the moniker assigned to the burst of demon-repelling/annoying energy emitted by the flick of my fingers.


NOTE | The energy burst and the finger flick are shown in VIDEO | Demon-exorcising power (finally) caught on camera.

That radiation is made more evident by the presence of chroma, which acts as a superconductor for the energy produced by demonic weapons and the opposing versions of same; chroma not only increases the strength of the weapon, but creates detectable signs of use (i.e., aiming and firing). One sign that a demonic (or opposing) weapon has been aimed and/or fired is EMF-based interference with the operation of the image sensor in a digital camera, which manifests itself on video as excess color noise and distortion. By contrast, environments absent of chroma insulate the surrounding area from EMF radiation from demonic weapons energy, making it virtually undetectable.


When recording video with a digital camera, aiming and firing a zap in a chroma-filled area will add color noise and distortion to the picture that is not present otherwise. To demonstrate this, such a video was made, and the following two still frames were taken from it in order to compare the difference between a frame showing the occurrence of the aiming and/or firing of a zap and a frame showing otherwise:
Because, by viewing individual still frames, the difference is more subtle at a glance, here are enlarged cut-outs from the still frames above for easier comparison between the two: 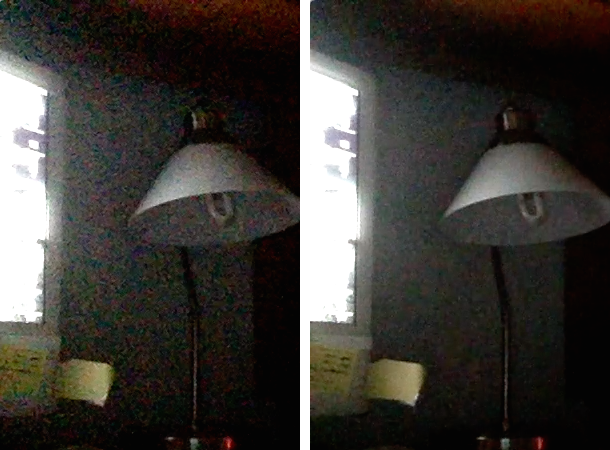 Concentrated and focused bursts of energy from a zap or demonic weapon create a level of EMF radiation high enough to ignite chroma—for lack of a better term—which is not only responsible for the golden-white burst you see on the contact point of the target of a zap, but, also the occasional red ambient glow that fills the area near the contact. This glow can be seen in the video, appearing right on top of the color noise and distortion added by one of the zaps. A side-by-side view of two still frames compare a frame distorted by excess red color noise produced by ignited chroma to a frame without:
While a still frame comparison-analysis is helpful, both of these type of EMF bursts are best seen in-motion. In the video clip, I perform a series of several zaps, pausing between each long enough for the noise to dissipate, so that the connection between the zap and the excess color noise and distortion is distinct:

As you may have noticed, at the last zap, the energy saver feature on the iMac dims the screen, both events being perfectly timed together. Believe it or not, this form of coincidence happens a lot. And, I mean a lot. The fact that it happened on video in this case prompts me to do what I would not have done otherwise, which is discuss the other half of the zap ability—the psychic half. With it, a zap is aligned in time with an event occurring near its target area or anywhere else in range (which is as high as the clouds and as far as the horizon). The event it aligns itself with is usually a relevant one, but, as shown in the video, in the absence of a threat, the most noticeable and significant event in my field of vision was chosen. In battle mode, the most imminent of multiple threats would be targeted for me were I not already aware of it, and even triggers an uncontrollable impulse to fire a zap when I'm unaware that a threat exists.


NOTE | While the psychic part of zaps is very powerful, battle mode is hard to engage for a non-hatefilled person.

Psychic targeting
Occasionally, I can force the psychic portion to assert itself in one of two ways: simply fire into the air, and let the zap decide where it wants to go and what it wants to do, or prolong mental targeting—which, by the way, also produces visible EMF radiation interference on video—which seems to add a more intuitive targeting to the zap itself (e.g., hits the most effective location on the target, even when I do not know where that is).

Unfortunately, coming from me, it does little to dissuade most threats I encounter nowadays; but, in the old days, very little got in my way. And, nowadays, I see very little of the old days.

Other effects of zap radiation on demons
Either the radiation from the zap or the zap itself interrupts Voices Demons' telepathic communication—I know this for a fact. I suspect that it is just the radiation that comes from mental targeting. I'll explain why later; but, for now, I'll say that a solution to unwanted communication is possible for those to whom it has been denied.

It is known that centurion demons can mentally block Voices Demons' for themselves and others; but, until now, I didn't know how—or, at least I thought I didn't. If I can sustain mental targeting output for a longer amount of time and put the focus in the right place, maybe I can do it, too.

Regardless, analysis of the particulars of the radiation might allow for its reproduction via an EMF emitter; a field saturated with this radiation would shield those inside from mental snooping and harassing.
By James Alan Bush at 10/24/2014 02:34:00 AM